From Beirut to the Bakken: A Conversation With Josh Wood 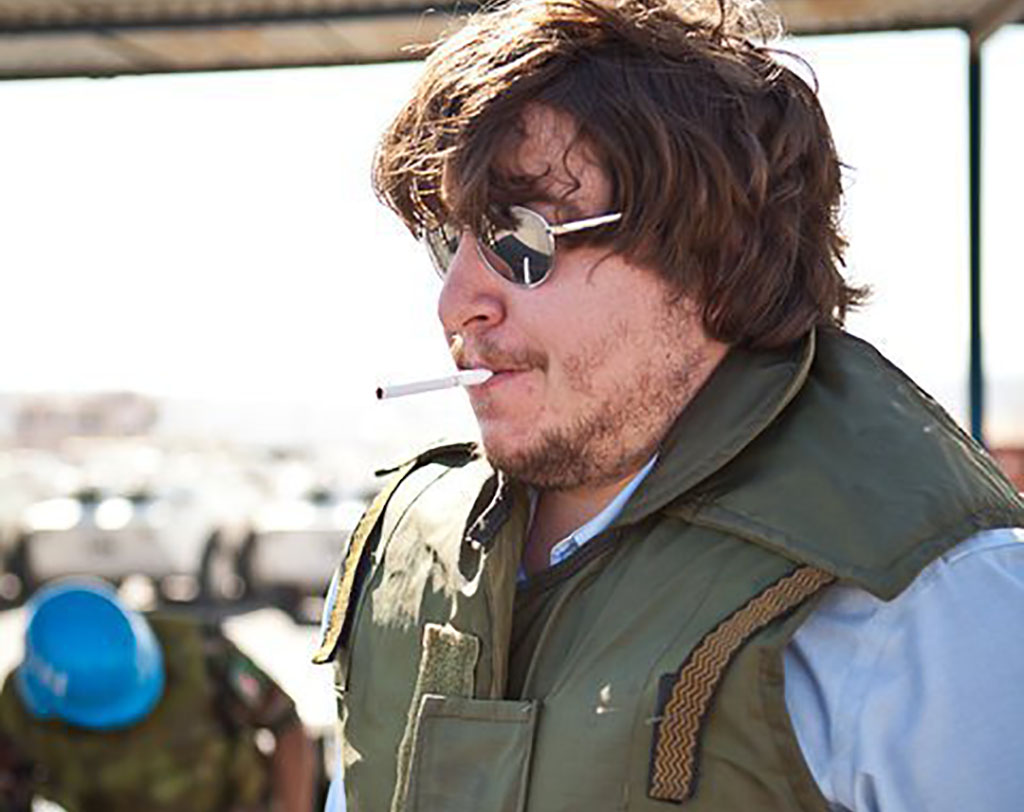 Josh Wood grew up in New Hampshire and Saudi Arabia where his parents worked for Saudi Arabian Airlines. After graduating from George Washington University with a Bachelors in Middle Eastern studies in 2009 he moved to Beirut where he began work as freelance journalist. In 2014 he returned to the United States to report on the Bakkan for Associated Press. The New Context spoke with him about his experience in the Middle East, covering the Bakken for AP and what’s next as he prepares to return to Beirut.

How did you get into journalism?

With my background it was kind of a natural choice, it was basically either government, NGOs or journalism. Government I had interest in when I was pretty young. When I was getting out of high school the state department really interested me. But as you get older you might lose a little faith in that. Journalism was kind of my go to after that.

I graduated from GW in May 2009 and moved to Beirut in July of that year. The economy in the States wasn’t doing that hot then, there was still a recession, there weren’t a whole lot of good jobs, I really just didn’t see a position for myself in the states so I just up and left. It was rough. I had taken a few journalism classes as far as writing at GW but I focused more on just getting to know the Middle East and the conflicts in college so it took a while, you know it was a crash course when I got to Beirut…it took a while to get some stuff published, but it all worked out. I was really poor to start with, I slept on a friend’s couch for probably about six months.

How was it starting out in Beirut?

I had a few friends out in Beirut already. So that helped me to get setup. I didn’t have much experience in Beirut, I’d only been there once for a few days while in college but I spent a lot of time studying Lebanon so academically I had a pretty good understanding of the country. So I showed up and started looking for interesting stories. It was a lot quieter back then. When I showed up a lot of things were under-reported, I spent a lot of time in the Palestinian refugee camps, it’s cheap and people want to talk to you all the time, so there are a lot of stories, so for the first months the bulk of my reporting was mostly in the refugee camps.

How difficult was it to get places to pick up your stories?

That is the hardest thing. Nobody wants to even read your stuff unless you have the clips to go along with it. So that’s always the most difficult part getting into journalism, is you have to be a journalist basically to get people to read your stuff. So, like a lot of young journalists trying to get into this I sent some pages to major publications that never got read, and was writing on spec stories, and then I took a step back and started looking lower, so started looking at English language publications in the Middle East and Lebanon. So the bar is a little bit lower. You can write in a little more detail–as a journalist you’re writing for an audience–so I was getting caught up I think with small details that internationally might not have much play, people don’t care, it’s too intricate, but writing for an audience that speaks English in Lebanon it’s a different story. So I started doing that for a while, and it’s always just stepping stones in freelancing so you build up a repertoire of work, move to bigger publications.

Expenses are still really difficult, money is very tight in freelancing, you don’t make much money, even getting expenses is difficult for most people, so you’re not making money doing it, you’re breaking even.

So what’s the payoff?

It’s enjoyable work for one. You’re in a lot of bad situations at times, its something that you have to be driven by it. You feel pretty good at the end of the day. You accomplish things which I don’t know if you can say about every job. And then you see a lot of things you wouldn’t see otherwise, there’s an importance to the work I feel. For me I’ve always just wanted to get an understanding of conflicts and these situations.

You left Beirut in 2014 to take a job covering the Bakken in Williston, North Dakota. How did that come about?

I was looking for a job with more stability than freelancing had for a number of reasons to give my family a little peace of mind for a while. I was looking for some things in the U.S. to break up time. And I saw the Williston a job offered, a temporary post up there. And that was a story I had actually been following a little bit from oversees. It really struck me as interesting.

Obviously it’s quite different, oversees you have these non-stop conflicts going on. As far as American stories go, North Dakota is fascinating. you have these little towns that were dying, really remote, I mean Williston even today are two two and a half hours from the nearest shopping mall. These prairie towns just bleeding their populations out for decades and decades, and what happens when you start dumping millions and millions of dollars and tens of thousands of new arrivals onto these kinds of places.

It’s a modern day gold rush basically, so I jumped at the opportunity to see that first hand. I don’t think we have too many stories like that in the U.S. Just the kind of challenge it presents for law enforcement, you get a town you have 30 cops or even less probably two years ago in Williston’s case…and now you’re dealing with Mexican drug cartels, human trafficking, without the resources. You find a lot of situations which frankly don’t exist anywhere else the country. And watching people try and cope with the traffic, it sounds kind of boring, but the he drive in there is probably the worst I’ve seen in the U.S. You have these tiny roads that are overtaxed, these huge trucks which is the majority of what’s driving up there, the number of fatal accidents up there…it’s a ridiculous place.

I sat down early last year [in Beirut] and tried to think of the last time we’d gone a month stretch without something really bad happening to me and my friends and I it was hard to remember, there’s a lot of violence, so I just wanted to get a bit of distance.

And now you’re going back

I’ve always wanted to go back. Me coming to the states was always just going to be a temporary thing, the Middle East is my passion. I think I’m better at doing work over there. I look at the U.S. as just taking a break, it was good, I think I learned a lot of things, how to write very fast, how journalism works in the States, which is completely different. Overseas there’s always something happening, you don’t wake up in the morning wondering what you’re going to be writing about, whereas even in a place where a lot of things are happening such as North Dakota’s oil patch it can be a bit slower. You have to learn about how to look at things in a different way.

How do you deal with security concerns?

You come up with plans quite a bit. Me and my friends, journalists there we all watch out for each other. You devise plans for each situation you go into…we’re very security oriented. You don’t want to be in those situations but you need to have plans to manage them. The thing that you have to do now is that you’re restricting your movement now, a lot of places that you used to be able to go two or three years ago, you can’t really work there now. So you’re pushed into these little safe zones in the Middle East. If I look back at some of the travel plans I had three years ago there’s no way in hell I would so those same trips today. It’s making the reporting harder.

What advice do you have for those considering a career as a foreign freelance journalist?

It’s a weighty decision because you don’t have a lot of support…you have to make sure it’s the kind of path you want to go on. It’s really not easy. It’s going to take up a lot of time and there are other costs as well, to yourself, family, just in terms of time you spend away, the situations you’ll find yourself in. If you’re going to the Middle East right now you have to recognize the danger. The way I work will is going to be a lot different going back over given the security situation in Lebanon. Lebanon has gotten worse I think every day since I arrived back in 2009. And those are real things, when I started I was in it for adventure, which is how people get into it but it’s really not a game anymore. There are a lot of things to weigh, it’s not a light decision.

We talk about how tough the job market is here but there are still interesting stories in America. My last post kind of showed that. You talk about some of these small town newspapers and they struggle to staff. The Williston Herald where I was, they’re always hiring but they can’t find anybody, there are very few resumes submitted and it’s probably the most interesting corner of America. If you’re coming out of J School or even if you’re just getting a bachelors there are a lot of interesting places in the U.S. you can start working right away but they’re overlooked with everybody trying to get to New York or D.C. People should probably look at those because there are a lot of good stories to be told.