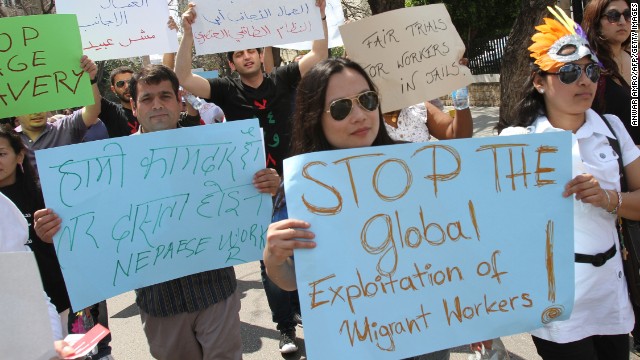 “I just wanted to help my family”

A small yet powerful statement uttered from the mouth of Cecile, a Filipino domestic worker formerly stationed in Dubai. After meeting this woman at a Church gathering and learning of her appalling experience as a domestic worker in the global city of Dubai, I was taken aback and needed to learn more. As it turns out, the realities of the female migrant domestic workers are anything but advancing in this progressive city. Lured in by promises of attractive wages and favorable working conditions, labor recruiters bring in women from Asia and Africa to assume domestic employment in the United Arab Emirates. Desperate for economic advancement, these women are convinced that this form of work will alleviate them from their impoverished conditions and provide a means to education, homes, medical care and sustainable welfare for their families. Often considered to be a “golden opportunity” by many of the workers, the experiences are far from bright.

The International Labor Organization is a global structure and a major entity of the United Nations. For its worldwide recognition and the way it is supposed to regulate and implement labor standards that promote decent work for all men and women, it certainly isn’t doing a great job. Cecile and many workers like her succumb to exploitation and physical abuse, unsanitary living conditions and have been denied adequate food and medical care. In certain cases, extremes such as forced labor and human trafficking have also been endured. Perhaps society is under the impression that slavery has been abolished; however, as migrant workers in Dubai are bought and their passports are confiscated it seems that certain elements of the practice are still evident.

There are virtually no legal safeguards governing the employment of domestic workers. They are explicitly excluded from the UAE’s labor law and from the basic protections that the law and other labor policies allot to most other workers. You would think that a population that comprises 95 percent of a country’s private sector would have some sort of solid legal framework in place to protect them; especially since the country has a GDP of US$ 383.8billion. It can be gathered that there is certainly no shortage of progressive operations – except in the regard of workers rights – clearly.

It seems rather odd then that in June 2014, member states elected the UAE to the Governing Board of the ILO. This is a blatant display of hypocrisy on behalf of the UN, as they have allowed a country that commits serious human rights violations through workers abuses, to oversee labor policies. Moreover, the UAE has also contributed significant funding to the UN Global Initiative to Fight Human Trafficking. Is the UN thinking with their wallets and not their heads? It’s time to take a step back and see the biases that are at play.

In 2013, the UAE voted in favor of the ILO Convention on Domestic Workers but has yet to ratify it. Where is the accountability? Why is such a major agency of the United Nations failing to require greater accountability from those who commit to a convention? The delay in the ratification of this convention is simply unacceptable and the United Nations should require member states to be more compliant and accountable. Especially when such severe human rights violations are involved.

The challenges that accompany globalization have made international labor standards more relevant than ever. The ILO has leverage on an international scale and should therefore be held responsible for ensuring that migrant workers are informed and not victims of deception. The international legal framework and social standards that the ILO tries so hard to promote and enforce seem to be completely disregarded in the UAE, and it makes you wonder where the validity is in their practices.

In an attempt to shed light on the injustices that migrant domestic workers in the UAE are confronted with, the Human Rights Watch issued a report that documented the abuses against women in the Middle Eastern country. Although the report features actual interviews with domestic workers, it appears as though the document only took up space on paper and created noise with no action.

In this progressive era that we are currently in, it is crucial that governments and organizations are vocal, consistent, principled and transparent about human rights. Society is not ignorant to the systemic incidents of human rights violations and worker abuses, yet no one is being held to account. As a global community, we depend so heavily on the United Nations and it’s respective agencies to ensure that there is a universal standard of peace and justice upheld. Yet the deficiencies within these organizations are disappointing and unacceptable. There must be action taken in order to establish justice and prevent women like Cecile from being exploited simply because they were trying to put food on their family’s table.