A Touch of Sin: A Panorama of Contemporary China 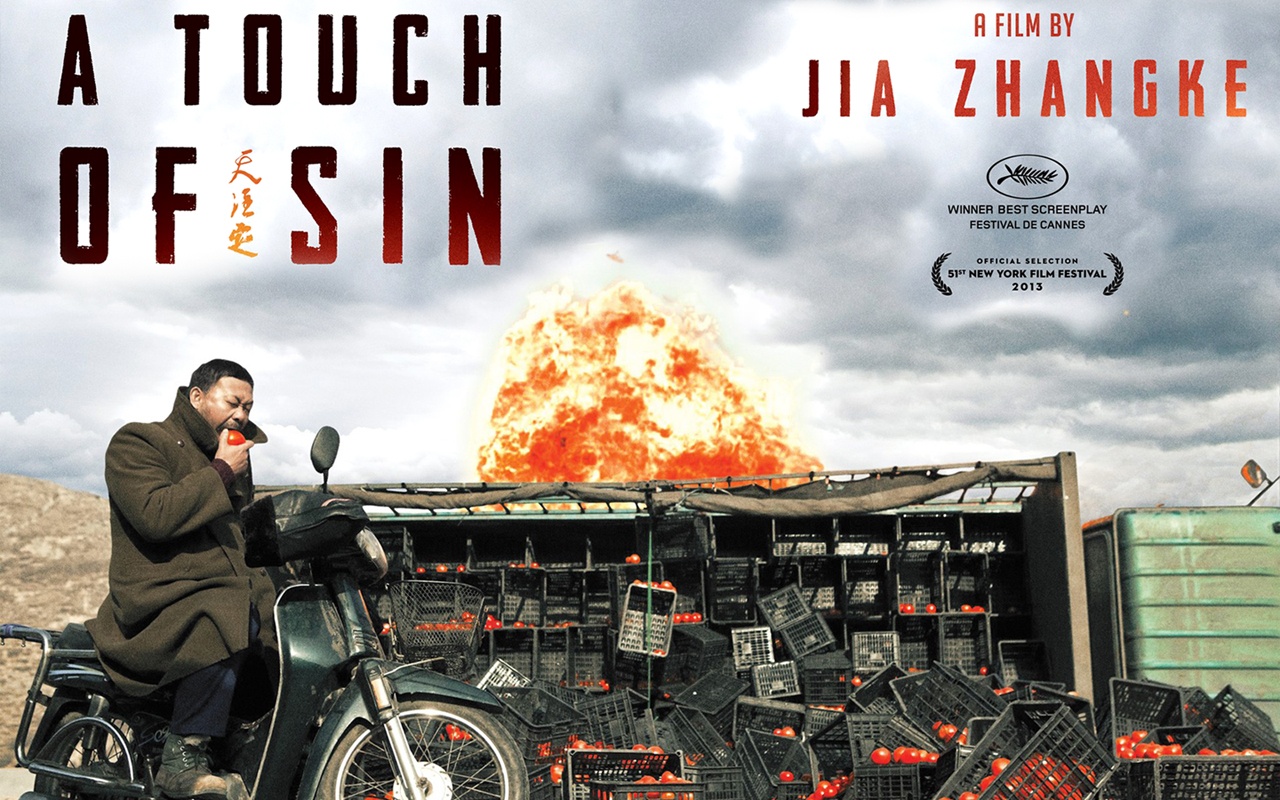 “Do you understand your sin?” This is the last line of A Touch of Sin, and it spells out the film’s message.  As told through the stories of four individuals’ tragic fates, director Jia Zhangke attempts to reveal the social reality of modern China in his 2013 film. Jia often uses his work to explore the impact of rapid social, economic and cultural changes on individuals and this latest film reflects his personal observations of the transformation of Chinese society. Through film, Jia says, audiences gain a better understanding of violence and thus have the courage to face reality. Its title 天注定 (Tian Zhu Ding), which means “God decides our destiny,” explicitly reveals the Chinese dilemma: Can we decide our fate? Or is our life predestined?

Unlike Jia’s early works, A Touch of Sin is a dramatic fiction rather than a documentary or minimalist-style piece. The film blurs the lines between reality and fiction, perhaps serving to elucidate ideas of truth often existing beyond our imagination. This ambitious film challenges society and humanity’s dark sides and attempts to present the complexity of violence in China. The characters are ordinary people living in different regions of China, each from a different class and phase in life. Together, the four characters represent the bottom 99 percent of Chinese society. Their lives trace a trajectory of despair, bitterness and hopelessness triggering resentment and anger, which translates into violence.  Resorting to violence is portrayed as an emotional release and a personal struggle with fate.

Violence and victimization are two common themes of mainstream news content, as scandals, crimes and disasters occupy China’s daily news. With social media’s popularity (Weibo has become a main news source), news spreads quickly. This new form of media grants the Chinese people a small outlet  for freedom of expression, however, with constant access to news streams, people become numb to the tragedy on their news feeds. Society is gradually losing its appetite for this kind of news and as Susan Sontag put it, society is “losing their capacity to react.” The news becomes less shocking and significant as  chaos, disorder and absurdity become the normal state of modern China.

A Touch of Sin is Jia Zhangke’s response to this phenomenon. “I am affected by all these events around me every moment. It is not ‘cool’ with me to not express this through film. I think I must make this film. In this violent environment, if there is not a response through the film medium, I, as a filmmaker, will feel ashamed. And I don’t want to live with a sense of shame,” he said.

Drawn from four once-hot topics on Weibo, the film invites audience to revisit these past events. It attempts to define violence and critically examine who commits violence. By  grouping four striking stories together, Jia Zhangke intends to evoke the collective memory of the past.

Huge contrasts and contradictions coexist in Chinese society. The Reform and Opening Up in the late 1980s accelerated China’s economic growth, but it also widened the wealth disparity and led to severe environmental problems. In the past three decades, the Chinese government attained economic growth at the expense of individual liberties yet, paradoxically, improving the people’s well-being was the goal of development. People are both the reasons for and the victims of development. Large populations  can be a great resource, but they can also be a burden for development. Society becomes a lifeless number instead of an aggregation of individual beings. The individual’s life is not respected; their rights are neither recognized nor guaranteed.

A Touch of Sin also reveals the moral tragedy in modern China, illustrating the effects of consumerism: people become driven by materialism and alienated from each other.  As people become obsessed with money and power, it becomes clear that there is no boundary between right and wrong. Violence becomes understandable and thus justified because they were trying to seek justice themselves. They feel at ease and are not condemned by the guilty conscience. Sin becomes “tolerable” by the public. On the other hand, criminals are sometimes regarded as heroes. But the characters later realize that being silent is also a sin.

The film, however, does not reach beyond the standard news reports recounting the four incidents. As such, Jia Zhangke does not succeed in delivering all of his ideas. The four stories are condensed, as it is a challenge to tell them fully in only two hours. I can feel the anger and the pains, but I find it hard to follow the film’s rhythm. It is difficult to relate to the characters; they seem familiar while somehow also seeming distant. Moreover, the film  loses its focus with too much storyline, undermining the film’s impact.

The religious symbols shown in the film add another dimension. Belief, redemption and reconciliation are important when interpreting the concept of violence: religion asserts that people must pay for their sins. Nevertheless, showing too many layers of connotation makes the film lose balance. The main issues are forgotten, and audience attention is scattered.

At the end, I began to question whether this film could actually bring positive change. Jia Zhangke does not give any solutions or alternatives to stopping violence. Instead, he ends the film with that question:

“Do you understand your sin?”

Perhaps Jia is merely illustrating his moral superiority. Or perhaps, it is meant as a call to action. Is Jia saying, “This is my action compelled by shame, what is yours?”

See Jia Zhangke Talking About A Touch of Sin Here.

Yiqing Wang is a graduate student studying international affairs at The New School. To contact her, write to thenewcontext@gmail.com.