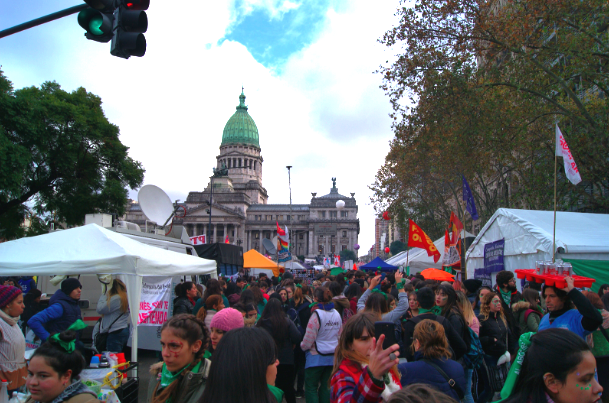 After several months of intense debate, on June 14th of this year, the lower house of the Argentine Congress approved the current abortion legislation to pass through the senate. The decision was made after around 13 hours of debate at 4AM where activists with their green scarves marched from Wednesday morning to Thursday noon in front of Congress waiting for a decision that would not only affect Argentina but the rest of Latin America. The day was full of debates from deputies –diputados– arguing for and against abortion from all different sides of the aisle. With an unexpected win for the Catholic country, the bill was approved with 129 votes, and rejected with 125 votes in which 4 undecided diputados prolonged the night’s decision.

On June 13th, the Campaña Nacional por el Derecho al Aborto Legal Seguro y Gratuito (National Campaign for the Right to Legal, Safe and Free Abortion) organized a historic march and vigil in front of Congress on the day where these debates were going to finish with a decision that would likely move to the senate. The senate has been perceived to be a challenge because the majority of senators tend to be more conservative than the diputados. The vigil was full of chanting, dancing, anxiety, and a lot of food! Different feminist groups and other social groups, such as the prominent Ni Una Menos group to many labor unions, that support the legalization of legal, safe, and free abortion procedures were in attendance, along with an overwhelming amount of young high school and college aged women.

The feminist fight for legal, safe and free abortion is far yet from over for Argentine women as the Senate hearings will likely start on August 8th to make the final decision on the bill. After many attempts to get the bill to Congress, many people throughout the world see this moment as the Argentine women’s rights movement winning for women’s bodies and women’s health. It has been an intense few months for the campaign and all the activists who have been working to build and maintain momentum. This debate has sparked leadership and mobilization amongst women’s movements throughout Latin America to organize and demand their governments for abortion legislation.