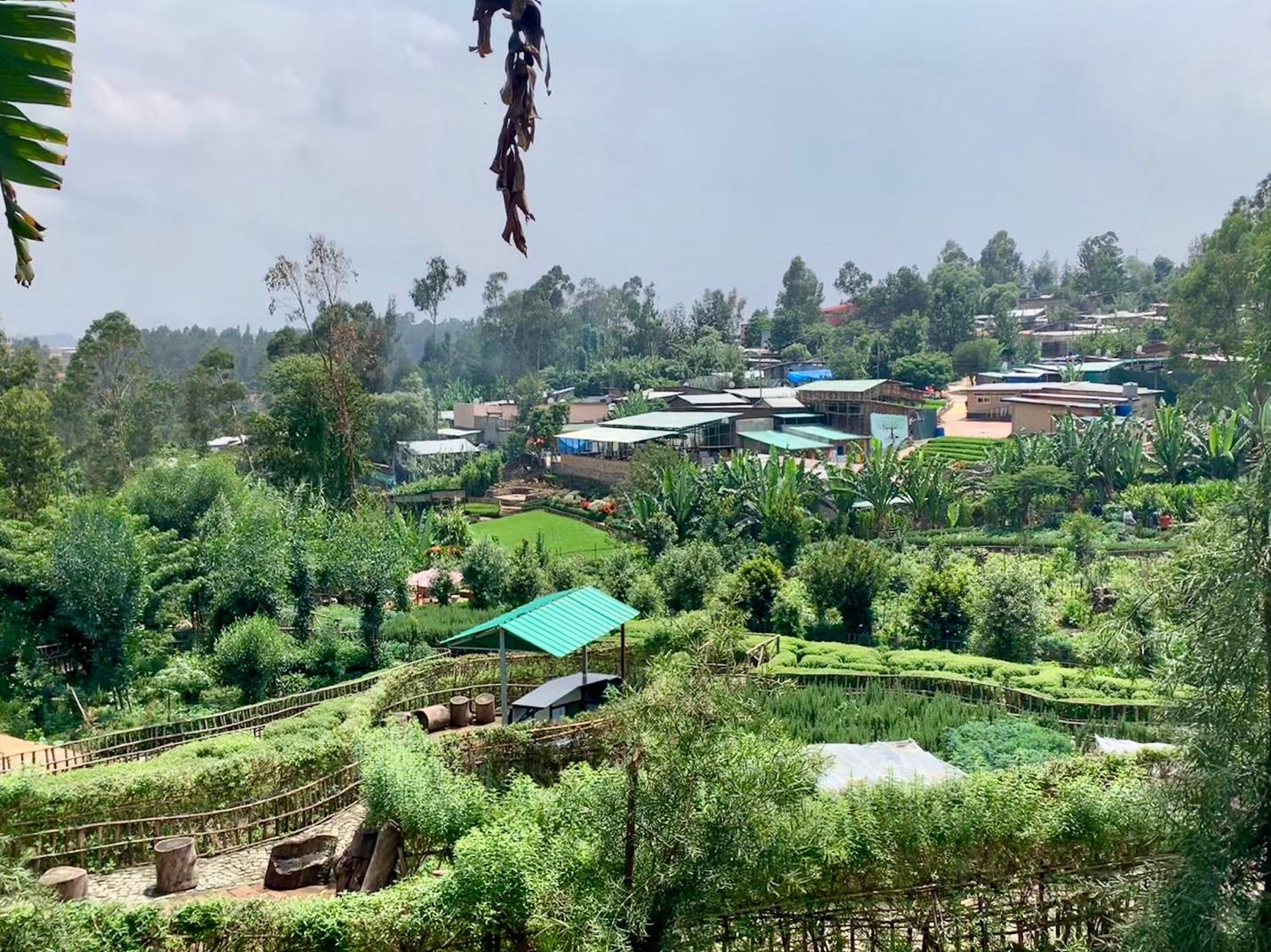 I have never fully appreciated the luxury of public space in a bustling urban environment before spending two months in Addis. There are two beautiful mountains, Entoto and Yeka, perfect for a hike without having to leave the city. Yet congestion, high population density, and widespread construction leave little to no space for any other form of public space. So, when we arrived to a luscious urban garden that houses the Zoma Museum during the orientation week back in June, its existence in Addis felt surprising, to say the least.

Zoma Museum opened only in March of this year but is a product of decades of work and exploration by its co-founders, artist, Elias Sime, and anthropologist and curator, Meskerem Assegued. Zoma is an exhibition space, currently showcasing the work of an Ethiopian wildlife photographer, Aziz Ahmed, a private elementary school, an edible garden with a cafe, and an event space. The museum space aims to connect the contemporary with the traditional by bringing artists from all over the world “to create cutting-edge ecological art and architecture.” Meanwhile, the elementary school embraces the importance of children’s interaction with and connection to nature and employs a mixture of non-directive learning, traditional Ethiopian teaching techniques and edible garden classes.

Zoma’s library and one the exhibition rooms

The centerpiece of the space is an ensemble of intricately embellished houses designed by Elias Sime, created using a mix of mud and straw, a traditional Ethiopian building technique that is used in settlements and villages around the country to this day. Currently, the houses get covered by plastic tarps to protect them from the rain until they turn a richer dark brown color, after which the mud walls will be coated with cactus juice to make them naturally waterproof. The co-founders quite openly share such little “secrets” of the space as they hope it will encourage a wider spread of similar environmentally-conscious spaces in Ethiopia. To further advance the revival of vernacular and ecological architecture that draws from traditional knowledge’s, soon, Zoma will also open an architecture school, where students will be able to learn the traditional Ethiopian building techniques and do hands-on work with organic local building materials.

A few months ago, the Ethiopian Prime Minister, Abiy Ahmed, paid an unofficial surprise visit to Zoma and expressed great admiration for what the co-founders managed to create and willingness to support the project. I was lucky enough to hear this exciting story directly from Meskerem, as I have spent the past month coming to Zoma every week to try to get a composting project I pitched to them off the ground (and grew a great affinity for the space).

The air in the garden is filled with the smell of an indigenous Ethiopian herb, rue or tenadam in Amharic, that commonly gets dipped in coffee for additional flavor.

In a few years (or decades) though, the city of Addis will become a much greener space, at least according to the current administration’s one-billion-dollar river clean-up plan. The Addis Ababa River Side Project aims to develop the two largest rivers in Addis, that stretch for 56km (35 miles), into a grand urban park with bike lanes, walkways, and indigenous trees stretched alongside the river, which is also supposed to mitigate the flooding of the city.

The “greening” of the capital is meant to draw more tourism to Ethiopia, which is a major part of its development plan in the coming years. But though the administration promises to deliver economic growth, thousands of jobs, and, finally, a recreational space to its citizens through the River Side Project, it is not uncommon for such “green economy” projects to come at a big price for the poorest communities.

While conducting the Self-Help Group interviews, we actually visited one of the settlements (tenants rent out housing from private owners) that is bound to get displaced as the river project takes its shape. The communities are told that currently the rivers present a major sanitation and health risk to them and are promised to be relocated into affordable housing units instead. However, we have heard from many locals that the demand far exceeds the housing availability. Besides, many communities use the land by the river for farming, so relocation will also likely threaten their food security (among a host of other financial shocks).

Among a few people I have talked to here on the subject, few give any clear answer on how to deal with the seemingly inescapable displacement that is to accompany this project. A city planner we met with brushed the issue off completely, saying that cleaning up the river is simply something that “needs to be done” (neglecting that so is providing housing security for everyone in need).

Hopefully, the project will indeed bring the many promised benefits to Addis citizens themselves. But I am, once again, at a bit of a standstill, as I do not wish to be quick to judge (especially without having the full grasp on the situation), but the river project makes me wonder how such green developments, not only in Ethiopia, can be deeply reexamined and conducted in a more just and equitable manner.