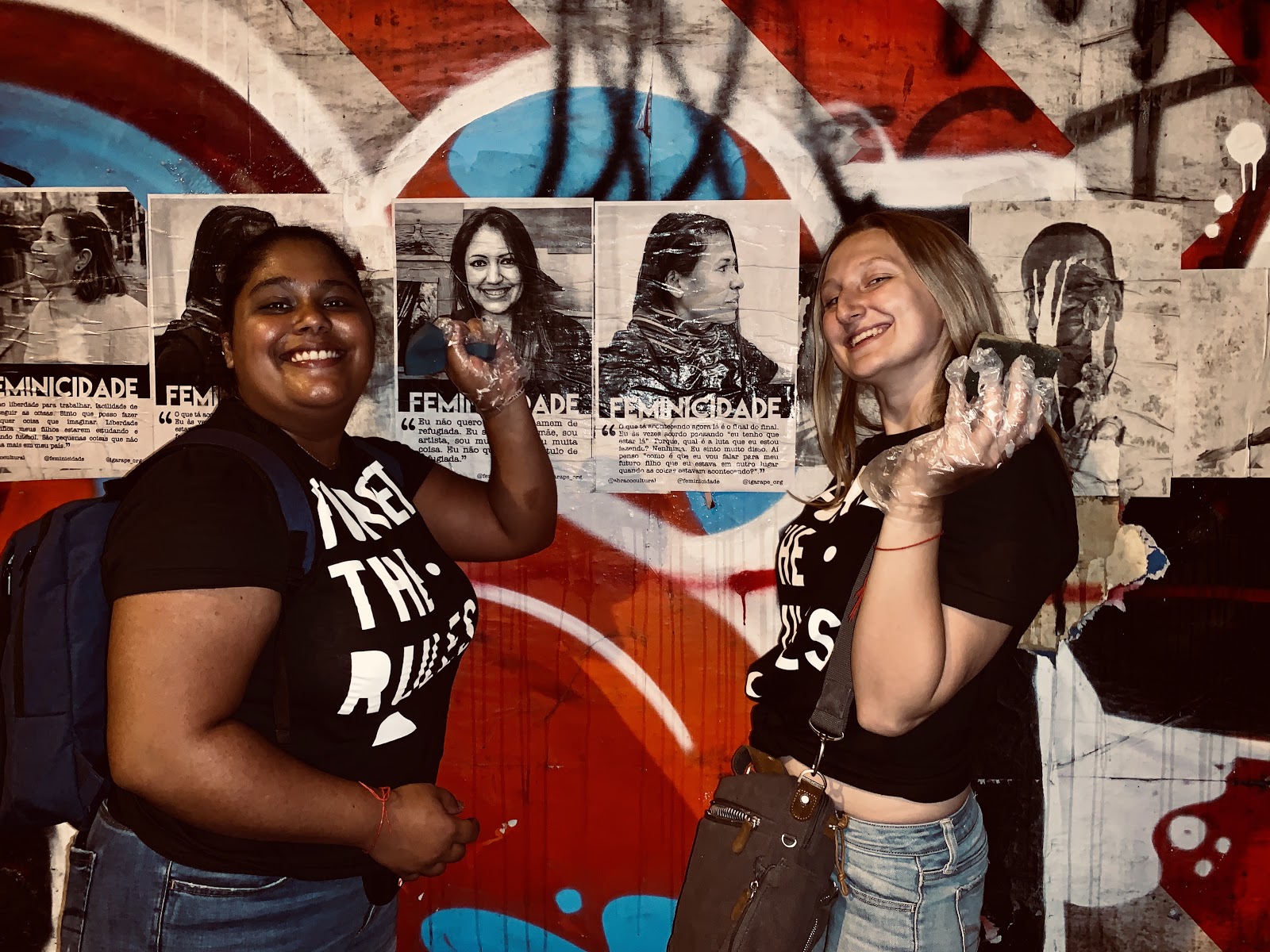 SGPIA students Emily Keller and Carmen Soto Diaz are participants in this summer’s International Field Program in Rio de Janeiro. Emily and Carmen sat down to speak with The New Context about their experience researching women’s issues in Rio and developing a range of media work throughout their time in Brazil.

You’ve been in Rio now for about a month! Can you describe your current research?

Emily and Carmen: We are researching female artists in Rio that create art with a human rights focus as well as learning what it’s like to be a woman in Rio by talking to female college students. Through our research we have participated and attended events advancing women’s stories and experiences about violence and being a refugee. At this point we’ve interviewed two artists and six students, and are planning four more conversations. We’ll be turning this research into various media projects on a website we’re creating called Mulheres (women) in Rio.

Did you have experience researching women’s issues prior to coming to Rio?

Emily: My pathway during undergrad was in gender studies and I was a communications intern at Vital Voices, a leading NGO, started by Hillary Clinton, which empowers women entrepreneurs globally. There I acquired skills from producing ground floor research of an international social media campaign called #sheisvital, which tells the story of the powerful women the organization supports. I have also produced several research papers on topics related to women and most recently wrote a research paper for the Research Database Collection class (part of GPIA) about the #MeToo movement.

Carmen: As part of my research for the Database Collection class in GPIA, I conducted research about marriage ideas of Latin American women and how these ideas are changing between generations. I also gained experience researching women issues during my work study opportunity in the health services office at the New School, where my main interest was women who are victims of violence and depression, specifically in students.

What’s something you’ve learned through your work here in Rio that you hadn’t expected or anticipated?

Carmen: The whole project. Basically, I learned how to network in a different cultural context and also how women’s issues vary in different countries. Women in Rio face challenges that perhaps women in the U.S. don’t. Here in Rio we’ve found that the government has not taken many preventive measures in terms of violence, and many laws that protect women are only printed on paper but not actually followed. This problem also exists in the United States but personally I consider the issue to be much more severe in Brazil than in the United States. This may also vary depending on the region of the country.

Emily: I learned the intricacies of planning a project from the ground up and how much time that planning process takes, as well as how to network in a different country. We were initially connected to three women artists and from there those women connected us to other women. Connections happened organically as well when attending events. We’ve also been able to establish new contacts during conversations with mutual friends from Rio.

We’re halfway through our time here – what are you hoping to do during the next few weeks?

We are in the early planning phases of collaborating with an artist we interviewed in Rio to do a performance piece about violence against women!

That’s amazing! How did that come about, and was that something you planned on going into the experience?

We were having a conversation about how we both had a background in acting and she (the artist) suggested we collaborate. We definitely wanted something like this to come about but were not sure how to pull it off. We still are in the process of creation and coming up with the final idea. We know we want to practice our voice as activists advocating for women’s rights and not only be part of this journey behind a camera (recording everything that happens). We want to be part of the demands made by Rio women, whether on the streets, in museums or other public spaces.

A howl, a whisper | We are alone many – performance art piece directed by Ana Paula at Parque Lage.

How do you plan on bringing this field experience back to your studies at TNS in the fall?

Carmen: I have decided to concentrate on Media and Culture in GPIA based on this experience and also I know what population I want to focus my research on.

Emily: I plan to continue to think of new and creative ways of talking about women’s issues and bring that thinking into my Practicum project.

Emily and Carmen with Leticia Duarte and Julianna.