Turkey and Its Breakfasts 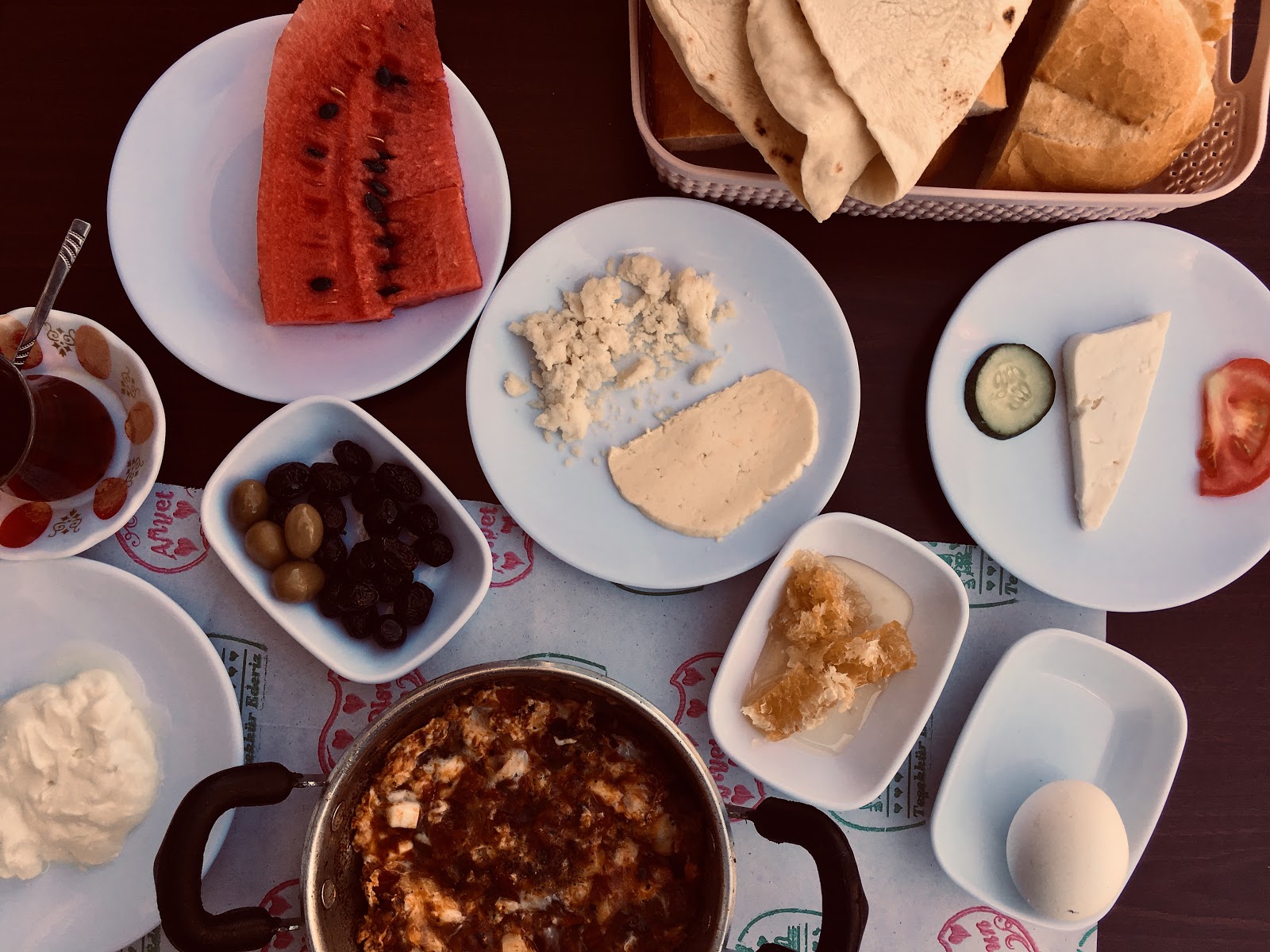 I recently went to visit a friend in eastern Turkey. He lives in a smaller town of 76,000 people, which is surrounded by dry farmland. It was oppressively hot, and the heat radiating off of the pavement seemed to have physical force. It was the kind of heat where the only thing we could do all day was sit around and drink tea and wait for the heat to pass; it was the kind of place where once it cooled down in the evening, there was nothing more to be done except sit around and drink tea.

What saved me was breakfast. Turkey is famous for its breakfasts, and after soap opera, breakfast is Turkey’s second cultural export. We went to a kahvaltı salonu (breakfast place) one morning, when it was already so hot that as soon as you sat down, a waiter brought water bottles straight from the fridge. Turkish breakfast is served in small dishes the size of your palm, and everyone at the table eats communally. Bread is a constant, both loaves and flat breads called tandir ekmek (tandoori bread).

I’ve been coming to Turkey for years, mostly because I fell in love with Istanbul. Istanbul is by far Turkey’s largest city. It’s a world of its own, the economic and cultural center of the country. It has centuries of history, and endless streets of aging buildings that attest to the old glory of the Ottoman Empire. But there are also newer districts, growing businesses, fancy new cars. During the day, the streets are full of families and tourists and men in tailored suits. At night, the sidewalks are taken over by cafes and musicians, and loud music spills out onto the streets.

The first dishes to come to our table are cheeses and other dairy products. Hard white cheeses, soft white cheeses, thick sweet creams, and butter and yogurt too. One type of cheese is so hard it crumbles under your fork, and is so salty it makes your eye twitch. One has the consistency of jelly, and another comes twisted like a small rope. We dive in, tearing off pieces of bread and folding them to hold bites of cheese. We move fast – because the plates are all shared, you have to be faster than the other people if you want to eat your favorites.

Outside of Istanbul, the cities get smaller. They tend to be more conservative, and the jobs don’t pay as well. Many people come to Istanbul to work, living on the same streets as others from their hometown. Some are displaced by fighting in eastern Turkey. Some are migrants from further abroad, from Syria and Africa. You can eat Nepalese and Georgian and Uyghur food, and hear Arabic and French and Russian on the streets. But most of the restaurants serve Turkish food, and most of their guests speak Turkish.

Then come other small breakfast dishes: plump green olives, shriveled black olives. Slices of cucumber and tomato, a small bowl of tahini. There are sweet things, too: cherry jam, honeycomb, a slice of watermelon. My friend takes off chunks of watermelon with the side of his fork, until there is only one bite left for me.

My friend’s city is far from Istanbul, both in terms of culture and distance. It’s not only religious, but also culturally conservative. Many women wear brightly-patterned headscarves. Certain cafes have only men sitting and drinking tea. My friend tells me that I can’t sit in these cafes, that no woman ever comes here to drink tea. The men play backgammon and dominoes on the short plastic tables of the many tea houses and gardens. The women are home in the evenings, cooking and cleaning and watching tv without their husbands.

Tea is served constantly with breakfast, and we take sips from the small glasses in between stuffing our faces. All the tastes mix together, since you only take one bite of a dish at a time. Bread with cheese, then a slice of tomato, a single olive, a sip of tea. Then back to the cheese, or to something sweet. There are so many dishes that it’s hard to choose what to eat next.

The heat is oppressive in my friend’s city, and in most places, there’s no air conditioning. We drive with the windows open, desperate for a breeze, but the air is so hot that there’s little relief. The hills are covered in brown grass and stumpy cedar trees. In the city, everything is made of concrete, and the bright sunshine begins to feel aggressive, offensive. Many buildings are new, and the trees are young, so there’s nothing to protect you from the harsh sun when you walk. We barely talk during the day. There’s nothing to talk about besides the heat.

Then come the eggs. There are two egg dishes, served in the small metal pans they were cooked in, silver on the inside and brass on the outside. One pan has fluffy scrambled eggs with chili flakes, and the other is menemen, a stew-like mix of peppers, tomatoes, eggs, and cheese that has a slight spicy kick, just enough to feel invigorating. The easiest way to eat the eggs is to scoop out a bite with some bread, and then pop it into your mouth. The melted cheese makes long strings that stick to my friend’s beard.

In the 1920s, Turkey tried to move from being an empire to a nation state. The official line is that Turkey is for the Turks, but the reality is that Turkey has never been ethnically homogenous. Despite efforts for decades to try to force minorities to assimilate or leave, there are still many who don’t identify as ethnically Turkish. My friend is Kurdish, like roughly a fifth of the population of Turkey. Although speaking Kurdish in a school or government office can lead to accusations of terrorism, I sometimes hear Kurdish spoken next to us in tea houses.

We barely speak while eating, communicating in grunts and gestures only when we reach for the same dish. We start mixing tastes: honey with soft white cheese, watermelon with hard white cheese, fresh tomatoes with cooked ones. Bread goes with everything. A small girl stops by our table, watches us chewing our fat mouthfuls. My friend looks up long enough to wave at her.

It gets hotter. We finish the eggs, then the cheese, then the honey and olives. We sit back and drink more tea. It makes us start sweating, but we’re on our third cups already and just keep drinking. We sit in silence, enjoying the pleasure of a full stomach. We’ll get up and go on an adventure later, but for now, there’s nowhere to go and nothing more to do.