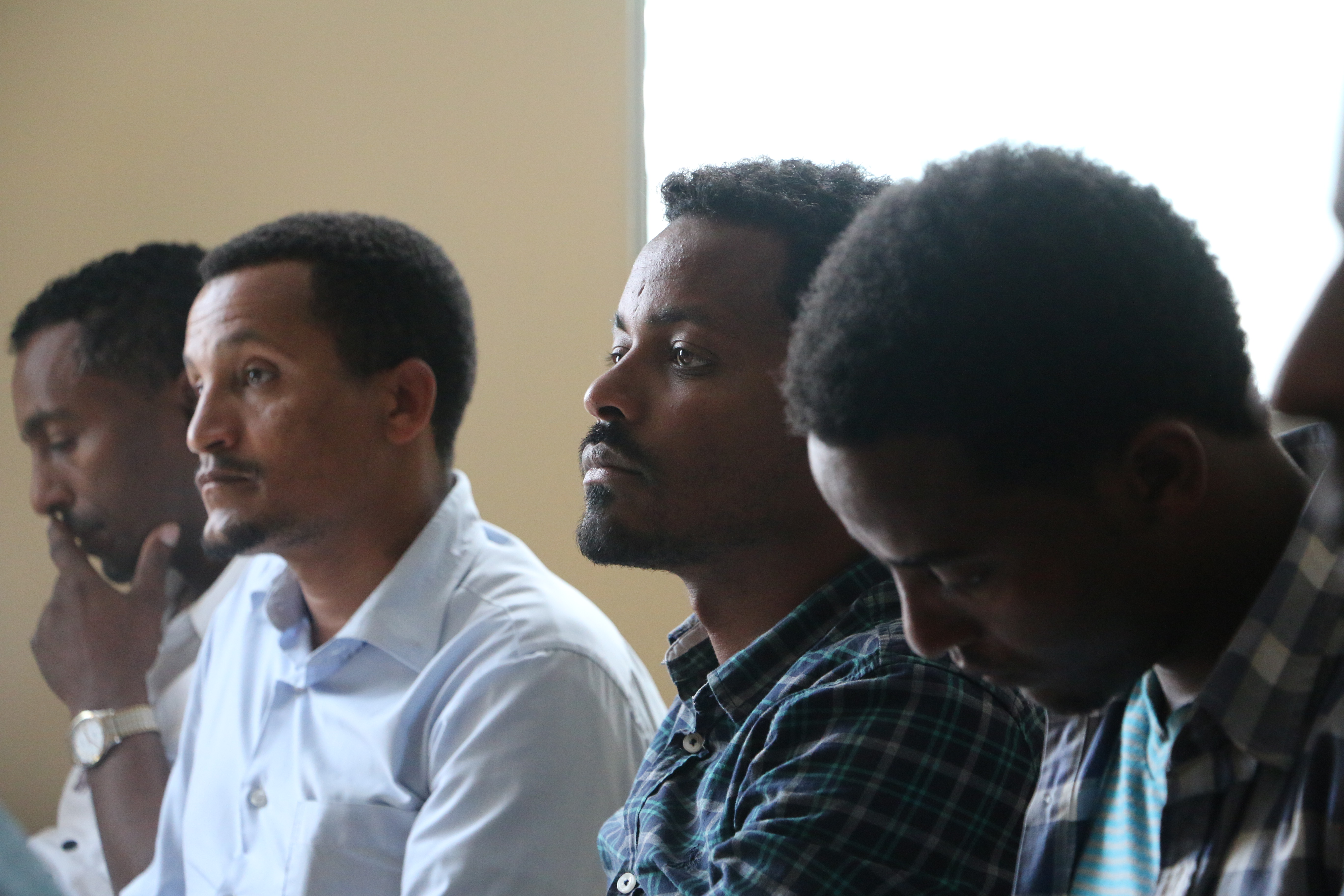 Students in a Masters class on development economic's at YOM Institute of economic development.

Brazilian poet Manuel Bandeira once wrote a poem called “The beast”/ “O bicho”. It roughly goes like this:

The beast, my Lord, was a man.

Translating poems always feels wrong, but writing this text has been a challenge – I need all the help I can get. I tried to hide behind a video essay, trying to not directly deal with the paradoxes and pains of the country I’ve been living in for the past month, but there is an importance in the exercise of finding words. It is essential for a researcher to develop the ability of verbally capturing reality as they see it. Particularly when it is one they desperately try to run-away from.

At the YOM Institute of Economic Development, the graduate institution that agreed to host me during my time here, dirty off-white walls mix with see-through plastic doors. In the labyrinth inside the commercial building I work at, everything looks the same. A newcomer wouldn’t know where YOM start, and other companies begin. Here, an aviation school stands alongside a dentist’s office, an art gallery, a production company.

In between very long internet cables and crammed elevators, one would think an office in Ethiopia would be like any office in the world. Hiding in this office would be a way not to face what is out there – on the streets of Addis. If I just focused on the spreadsheets, luxurious resorts and feline conservation centers (baby lions!), a trip to Ethiopia wouldn’t change me on the inside. At the same time, I would get the Western-hero sympathy card every time I told that story about how I lived in East Africa. “Oh, wow” some would say, when I got home, tanned and filled with instagrammable spirituality. Seemingly a win-win – for me.

Determined to interact with people outside of YOM’s comfort, I started to take longer walks in my outings through Addis. Here, it is impossible not to notice the people who walk barefoot through the muddy streets, pointing at their mouths when they see you. There are loads of children offering to clean your shoes for a couple of Birr. That is not too different from the streets of my native São Paulo, Brazil, where children lift their hands amidst cars when the traffic light turns red. In Addis, it is the number of children, the number of people by the sidewalk, that makes it harder. An army of citizens who are not necessarily looking at you, but it feels like they are.

Irkata, – I’m sorry – I mutter, unable to explain why I’m here and they are there. These people that could be from Malaysia, Guatemala, home (America?). Anthropology teaches:  if there is a way of helping them, the first step is to respectfully look, to notice, to stare, even if it hurts. So I stare and it hurts. The comfort of my condition bleeds out of me every day on my way to work. It turns my luck into responsibility and my efforts to see into my one weapon to avoid the blindness that affect most of those who look at the poor from the outside.

Just like in Manuel Bandeira’s poem, as quick as a turn of the head, it is possible to convert those who explicitly suffer into a mass with no name, no past, no laughs – a beast. In the defensive mode of not wanting to see what it hurts to look at, one can ignore the intelligent solutions to the lack of resources, the differences in clothing, expression, attitude. The very same characteristics that make them different, and therefore, human.

Walking to work, I started to see familiar faces. The man in the parking lot who waves and calls me “Japanese” (I don’t get it either), the guy at the cafe who waves repeatedly and enthusiastically, the armed guard who waves at my spirit saying “Salam”. My spirit acknowledges him and his AK-47. Hello to you too.

One of the faces in the crowd is Maza’s. Maza is an 18-year-old girl. Her English is as good as my Amharic. Our interaction consists of us smiling at each other and pointing at things we like. Her necklace, my necklace. The plastic bottles she ties to the bottom of her house to collect water from the rain, the scar I have on my right hand. On the first time we spoke, after days of waving at a distance, I put my hand forward to shake hers. I felt connected to her, I felt for a while like I understood her more. Her hand approached bringing a wave of guilt as I saw that her hand and arms were covered in dark bubbles and scarred tissues. “You know nothing, Sofia Silveira” – I thought, speaking to me in the third person, trying to distance myself from me and the fact that I hesitated before shaking Maza’s hand. The difference between the opportunities I had and she had were clear as the coats of the thousands of doctors who took care of every sore throat, every flu, every symptom I’ve ever had. Irkata, Maza. Irkata.

The difficulty of writing this article is that I bring with my words a truckload of guilt, but not many suggestions, not one story of how I actively used my privileges and resources to help Maza – who says she is ok – ashy – ok. What I can do is something that is being built during this month. Just like a research, the field is telling me what to do, although it is a constant struggle to not apply ready-made responses into a harsh reality I avoid seeing.

Coming back from my walk I return to YOM, with it’s development classes and vision for a technologically advanced Africa. Here, I realize the lack of means never stopped anyone I’ve met so far.

When my internship started, they asked help with all medias related to the institute. Faced with an invitation to design brochures, logos and graduation invitations, I cowered away from the task at first, explaining that I’m not a designer. But when the budget is limited, film-makers turn into designers, solutions are created and Maza still sells her corn at the edge of the road.

In a society that reminds me so much of my São Paulo, Brazil, my responsibilities as an international student become more transparent and inescapable: to build bridges between YOM and The New School, the institutions I know in Brazil, and American resources. Make my loads of mea-culpa share the previously mentioned truckload with American dollars.

I shied away from this text (irkata for the delay, IFP) just like I shied away from my responsibilities towards YOM – in the end, they all pinch me in the same spot,  asking what my role in all this is. As I allow this trip to change me from the inside out, the resorts and luxury hotels Ethiopia has to offer seem further and further away. Acknowledging and interacting with the space around me with the intensity it asks for dabbles with my odds at this game I didn’t initially choose to play. It changes what organizations I want to negotiate with, and how. It makes me realize how blind I still am. It makes me think of José Saramago’s words in another unfair translation: “I don’t think we did go blind, I think we are blind, Blind but seeing, Blind people who can see, but do not see.”

The way I see it, if you are a student from Brazil living in America, or someone working for two full months in the global South, you can find at the back of your Western-sympathy card an invitation to be a bridge in between resources and local people with a vision of a less unequal country. Building a world where your destiny is not defined by where you were born  depends on the work of those who are fortunate enough to choose if they will help to build a different global landscape, or not.

If you are in that privileged position and you ignore the fact that you are part of a resourceful minority you are no different than the Americans and Western-European who trashed Ethiopia’s image in the name of aid. If you are the lead of an international NGO and you refuse to give space to local coordinators – those you claim to be helping – describe the problems they are facing, you are not helping.

I will never truly understand how Maza feels, but I can understand what her challenges are if I respectfully look at and listen to her. If I do not let my discomfort prevent me from seeing her greatness and the odds that play against her, I can find programs and solutions. I can give her a platform for her to choose for herself what she wants to do.

Systemic poverty is something to be faced with and by every available human force. It needs you to ditch the truck of American dollars and guilt described earlier and turn it into a boat to be landed on an appropriate site in hands that are going to act at a grass-root level to face problems they know how to diagnose. At the same time, we need to amplify the solutions already found by locals, not destroy or ignore them. Turn Maza’s plastic bottle into a bucket and YOM’s ideas into projects.

In the month I’ve been here, looking around does not get easier. It does not hurt less. It probably never will. It makes me realize how much I still have to learn. It makes the commercial building’s maze bigger and more confusing, but at the same time it makes me want to fight harder to create fruitful partnerships and lasting resources. If you are looking for how to contribute, load in your guilt and your connections, because there is a lot to be done. To paraphrase the 1975’s blockbuster “Jaws”: “we are going to need a bigger boat”.