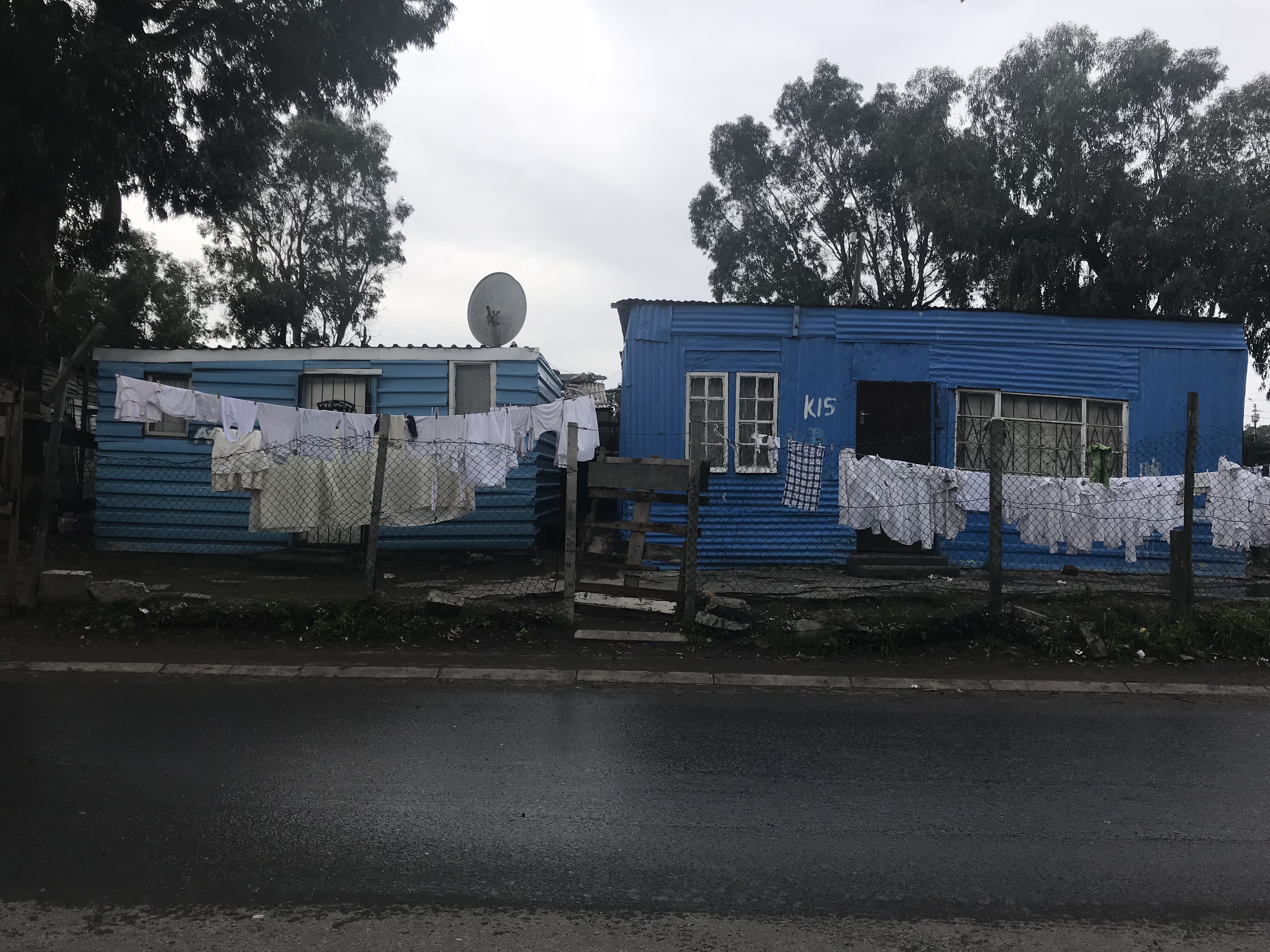 Last Saturday, we were invited to a community meeting with the Kanana community in the township Gugulethu. Kanana is part of the larger Vusi community network that involves several communities from Gugulethu, Langa, Khayelitsha, Philippi. The meeting was held within the community, in a trailer tucked away down an alley in the bright and bustling township. We sat in with around 30 community members, our SDI team and members of SDI’s South African NGO alliance CORC, the Community Organisation Resource Centre. The Vusi community has been working on a large-scale project – the community relocation of 800 households following their purchase of 27 hectares of land. The meeting opened with the community erupting into a song sung in Xhosa, followed by a prayer. Skye, SDI’s monitoring and evaluation director, told me the songs have been created to reflect the community work. Themes of profiling, enumerations, upgrading, and the federations are present in the songs, giving voice to the work. 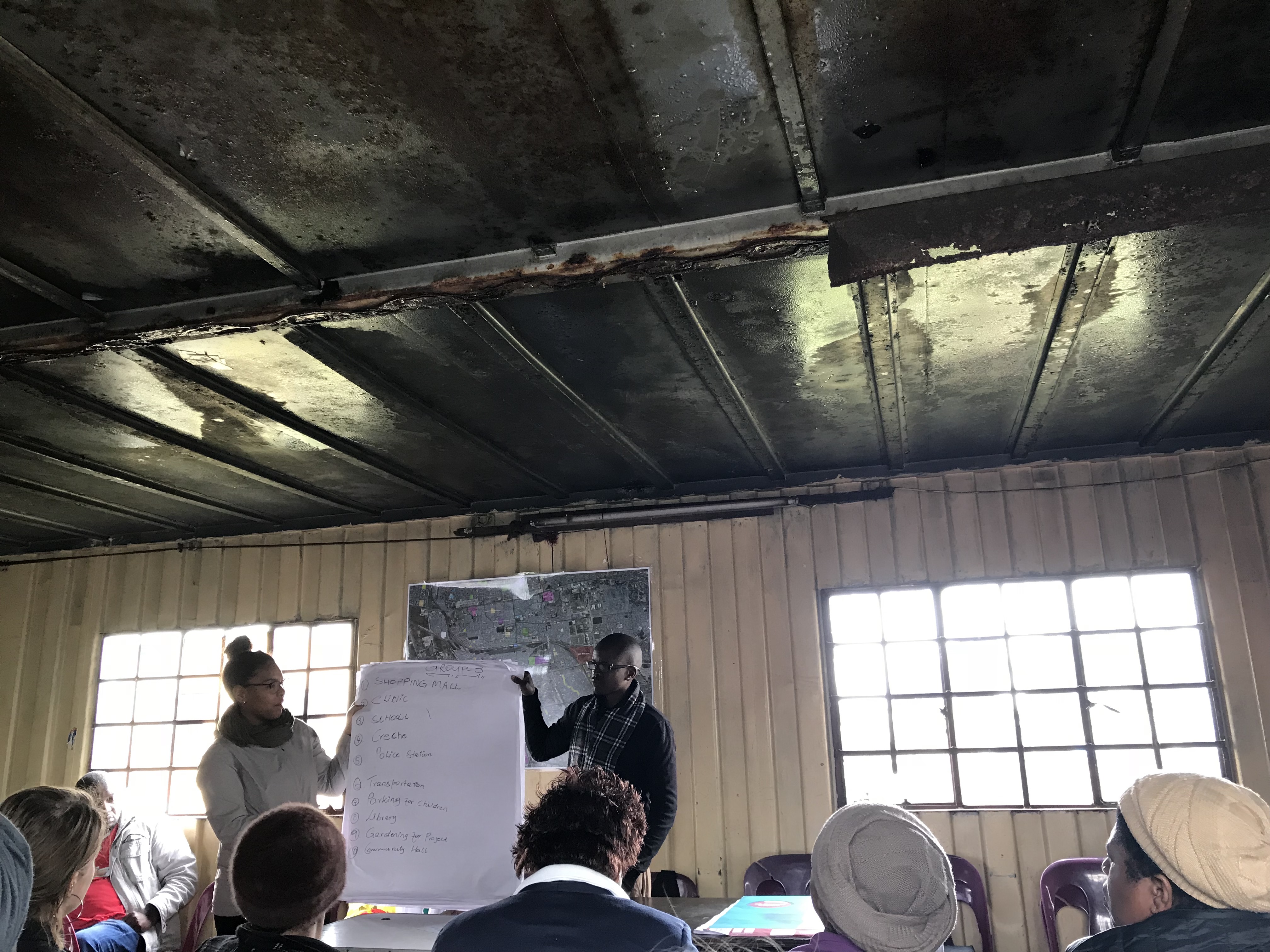 The meeting was chaired by federation member, Duma, who explained the background and the purpose of the meeting, and gave a recap of what has happened in the previous weeks. The community has been in ongoing talks and workshops, preparing for a big meeting with Province mid-July to negotiate use of the land. Essentially, in order to be approved for housing subsidies, the community must strike a deal with Province that alotts it a portion of the land purchased by Vusi. The bureaucratic loopholes in the system are tricky to navigate, and the stipulations are severe. These meetings are in preparation for that negotiation process. The community is using enumerations data to highlight the qualifications for housing subsidies and is holding meetings to answer any questions about how the process works. 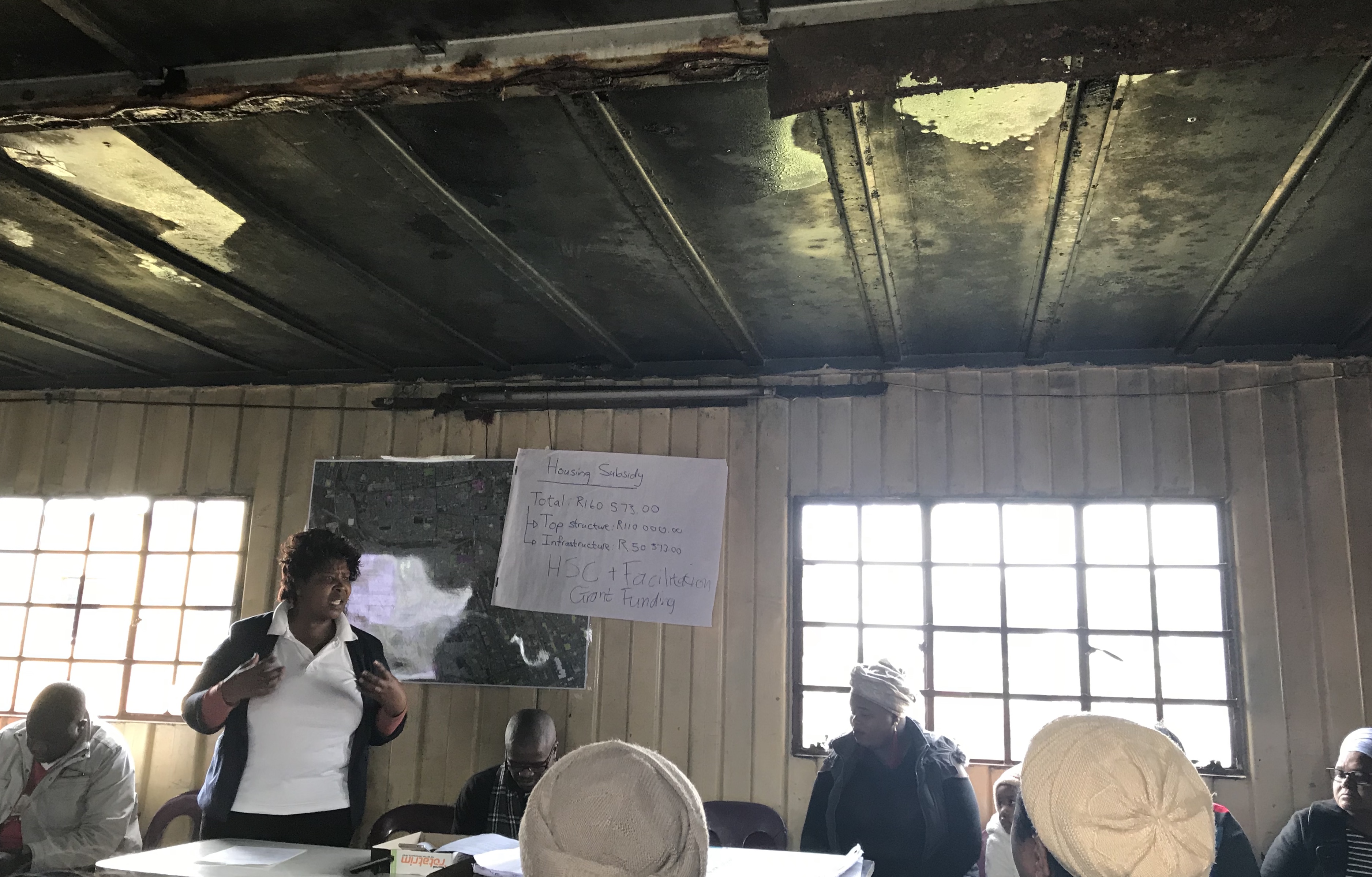 Community and federation member Thozama explained the qualifications of subsidies more in-depth. In order to qualify for a full housing subsidy, one must be: over 40 years old, have at least one dependent, earn less than R3500 monthly (roughly 300 USD), have no property ownership, and must be on the housing database. Looking around, it was obvious the strictness of the qualifications fostered an emotional response from the community. A community member posed a question about the exact dollar amount to be provided by subsidies, whether the full housing or a smaller supplementary. There was another inquiry asking for advice if one was unqualified for subsidies and practiced all avenues of saving and community participation, yet still fell short of saving enough to be able to move forward with this big transition. Thozama answered the first question by saying that she did not have an exact number, and that the amount would be contingent upon a variety of factors, mostly income-based. The second question was answered by the community, which was mostly in support of microloans or borrowing.

The last leg of the meeting went over the logistical framework of the land and how Provincial involvement in the space of it would likely turn out. Nadine from CORC and Duma went over the scenario maps, highlighting the different ways the community could negotiate with Province to keep the most land while allotting themselves subsidised assistance. They posited three scenarios for the land: the first scenario says that the Vusi community keep 100% of the land, which in turn gives them no leverage with Province to seek subsidy assistance negotiations. The second scenario has Vusi keeping 75% of the land and giving Province 25%, giving them a moderate amount of leverage for subsidy assistance negotiations. The last scenario has Vusi splitting the land 50/50 with Province in exchange for more bargaining power in negotiations. What was most striking about this logistical mapping of the land, however, was how much of it the Vusi community had already lost to outside entities. For instance, there is a dairy manufacturer on the land, occupying 5 hectares currently, with eventual plans of moving out but no clear deadline. Also, Province has had a freeway extension project in planning since before the purchase of the land, which will occupy 5 hectares of it at no reimbursement. This development project was made aware to the community at the point of sale of the land and is written into the title of the land. The issue with the freeway development is that it will ultimately cut into Vusi land and hinder opportunities for construction. 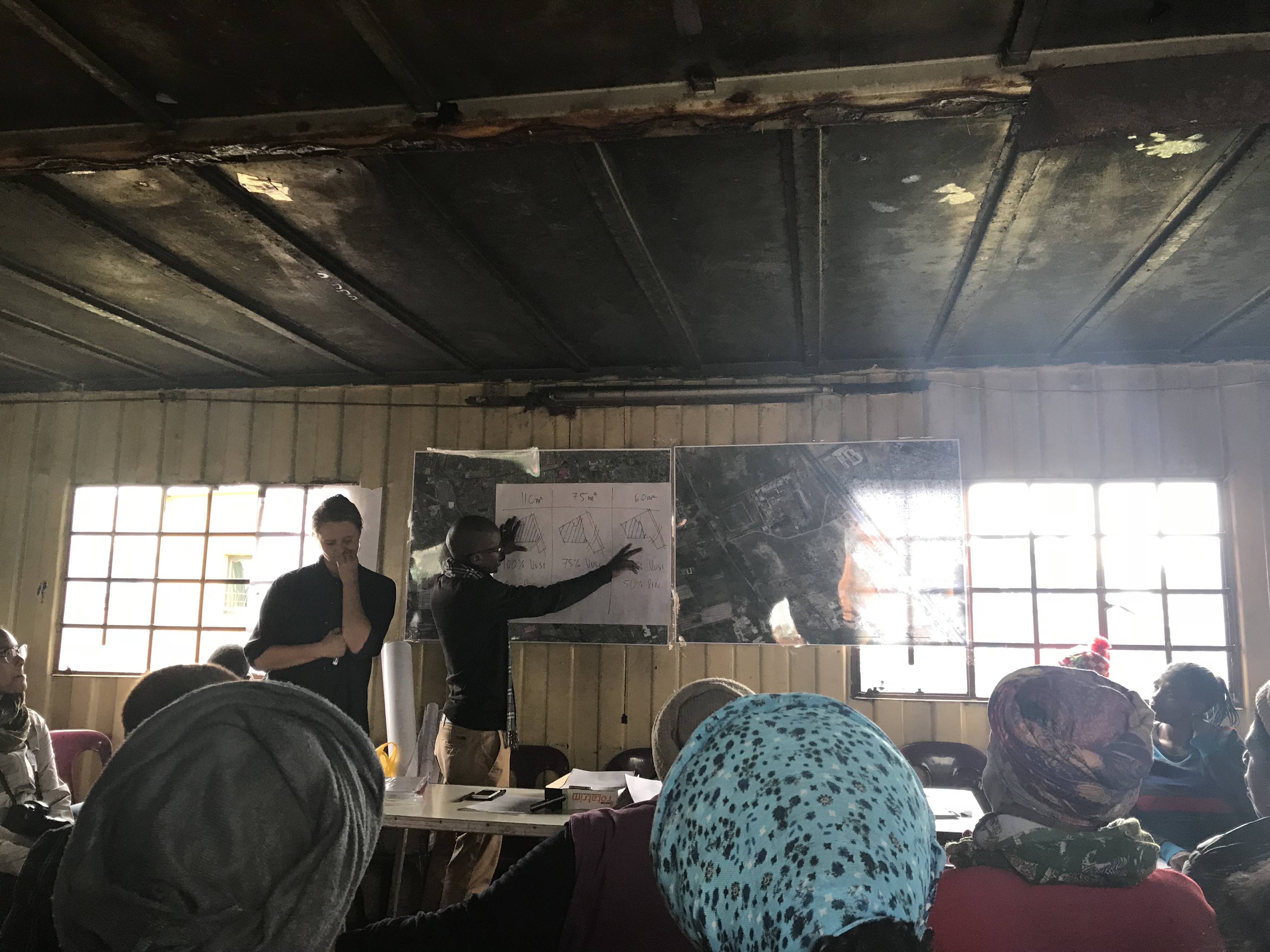 All in all, the logistical framework seemed effective but it left me feeling disappointed. To know that the land this community has paid and made plans for may ultimately be given to the government in exchange for assistance in relocating an entire community was ultimately disheartening. The community meeting was a significant aspect of our work with SDI. Seeing firsthand the way communities solve problems, plan negotiations with governments and generally support each other through conversation, compassion, understanding, and even song and dance was very important. The bottom-up approach to SDI federations’ work was made evident through the discussion of the planning process. Experiencing the process of the federation-led development project gave a greater understanding towards the work SDI does in communities globally. These workshops and meetings will be ongoing throughout the development. We are attending a larger Vusi network workshop this weekend that I’m really excited about. It will include members from the wider communities involved in the relocation project, and will explore in further detail the negotiation strategy. Will report with updates on that later. Ciao!