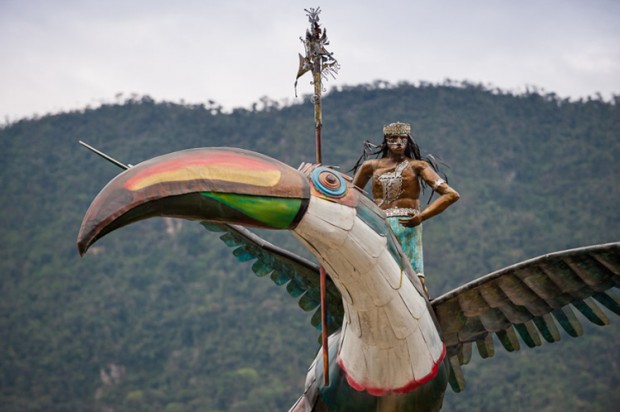 Ecuador doesn’t often grab international headlines, but questions about its current course have relevance for the Western Hemisphere and beyond.

What kind of leader is Rafael Correa? Is he a popular anti-imperial economist who champions 21st century socialism and rejects the “Washington Consensus” while protecting ecosystems by limiting oil production in vital wetlands? Or is he a neoliberal dictator who has rewritten his country’s laws to both initiate mega-mining and declare a state of emergency to intimidate and imprison his critics?

Will mega-mining for copper, gold and silver in Ecuador’s Amazon decimate one of the most biologically diverse regions of the planet?

How many indigenous tribesmen will be imprisoned or die fighting the Ecuadorian police, army and private security forces protecting the large-scale mining operations?

Will making comparisons to Avatar, of which there are many, help to get the message out to the world or dilute the seriousness of that message?

Investigative reporter Alexander Zaitchik recently spent a month going between Quito and the Cordillera del Condor, a land that indigenous peoples such as the Shuar, an ancient head-shrinking tribe famous for its savagery toward invaders, swear to protect. He explores these questions and more in a piece published at Salon.com just before President Correa was overwhelmingly re-elected in February.

“I got a lot of shit for the Avatar comparisons from activists, the stereotyping,” says Zaitchik, yet he handles the Avatar issue deftly: His article begins with members of the Shuar and other Amazonian tribes at a screening of the movie. And the James Cameron high-tech anime mega-hit did strike them as indicative of their struggle to save their land, especially the government intransigence.

So who are the bad guys? Chinese and Canadian mining companies and the man selling out to them. Zaitchik says some in Ecuador compare Rafael Correa with Augusto Pinochet, responsible for human rights atrocities and introducing neoliberal policies at gunpoint in Chile (as well as assassinating rivals in Washington, DC). Though the comparison seems extreme—like a South American version of calling someone Hitler to make a point—if you and your peers are being targeted by the undisputed leader of a country, you could be excused for being dramatic. Still, Zaitchik admits, “activists and journalists are being harassed and imprisoned. They’re not being disappeared from their beds in the middle of the night.” Either way, Rafael Correa won 58 percent of the vote, defeating the runner-up from a seven-part coalition against him by more than 30 percent in an election deemed free and fair.

Back in 2007, he was elected with “heavy indigenous support,” says Zaitchik. In his first year in office, Correa oversaw the congressional ratification of laws supporting

the Indian concept of sumak kawsay, or “good living in harmony with nature.” Ecuador’s new constitution also formalized the rights of nature itself. It was with nature’s new constitutional rights in mind that the assembly temporarily suspended all mining activity until the passage of a new mining law, which the president promised soon.

This helped his reputation as an environment-conscious progressive. But in 2009, he authorized foreign corporations to get to work excavating the land they’d been exploring and testing since the 1990s. An interview from Zaitchik’s piece sums it up:

“Like a dictator, everyone in government repeats his pro-development themes and slogans: Responsible mining, man over nature, Indians versus progress,” said Fernanda Solis, a weary-eyed campaign coordinator for the Quito group Clinica Ambiental. “There is no independent judiciary. The three powers of government are acting with Correa and everyone knows it. Because Correa represents the left, opposing him opens you up to the charge of supporting the U.S., or the old right that bankrupted everyone. He’s betrayed the new constitution and proven himself a neoliberal with redistributive touches. He’s avoided pacts with the U.S. but has sold the country to China.”

His piece also allows us to see how multinational corporations provide governments with a sales pitch of not only jobs and economic development but of their newer, cleaner technologies and bio domes. Zaitchik interviews biologist Alfred Luna whose team has studied the Condor region now set to be mega-mined.

“There is more diversity of life in one hectare of the Condor than all of North America combined.” The amount of water pulsing through the Condor, says Luna, makes laughable government and industry claims that large stores of toxic mining waste can be contained in tailing ponds, and that samples of the region’s wildlife can be preserved in greenhouse Arks for future replanting.

And what of the resistance and violence to come? After all, Zaitchik’s article is provocatively titled “To get the gold, they will have to kill everyone one of us.” Deadly conflict between indigenous tribes of the Amazon and government-backed multinational mining interests is nothing new. Indeed, there have been marches, protests, roadblocks, clashes with police and deaths in Ecuador since before Correa’s presidency.

In 2006, the Shuar warned a Canadian mining company to vacate a village where it was setting up shop.

When the deadline passed, hundreds of Shuar swept into the camp from the forest side at dawn. They trapped company managers inside while the women and children used long spears of chonta wood to block rescue helicopters from landing. The mining staff was only allowed to leave the following day with their equipment. The Shuar army continued by foot to a site near the main Mirador complex, where they slipped past a military guard and took over the buildings. After a three-day standoff, all of the company’s machines were hauled away on military trucks. The state responded by militarizing the other mining camps.

So the latest threats by the Shuar, and other tribes, farmers and activists who have banded together, don’t seem particularly hollow. Zaitchik predicts headlines on the struggle will flow from Quito soon. Hopefully they will be stories like this one, where the corporation backs down and violence is averted, for now. In the meantime, reporter Jonathan Watts has been covering mining developments, keeping us updated on another relevant question about Ecuador’s policies that Zaitchik addresses: Will China, which has become the primary lender in the region, own South America’s mineral wealth? Stay tuned.