Big Rises: Rating the Ratings of Press Freedom in Myanmar and the United States 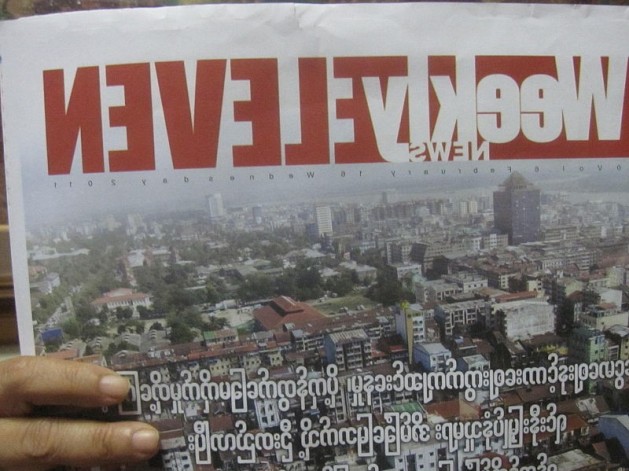 When private-run daily newspapers finally made it to the newsstands in Myanmar last Monday for the first time in 50 years, Myanmar nationals and press freedom advocates had reason to celebrate. Before April 1, state-controlled media in Myanmar had a monopoly over daily news publications, as privately owned newspapers were limited by law to weekly distributions. President Thein Sein’s development and reform efforts are slowly bringing positive change to media laws, but Myanmar’s press freedom is still muddied by the country’s Printing and Registration Act of 1962, which, according to AP, carries a maximum seven-year prison term for failure to register and allows the government to revoke publishing licenses at any time. But with the government’s push for press freedom, which started in August with lifted censorship, and then went further in December when the government invited any Myanmar national wishing to publish a daily newspaper to apply for a license (those granted permission were free to publish starting April 1), positive results are evident.

At the most basic level, a renewed sense of optimism is strong among journalists and editors. Veteran news editor Khin Maung Lay, whose daily was one of the four to go on sale Monday, told AP, “We’ve been waiting half a century for this day…I was in tears seeing this.” Others, whose papers have been licensed but not yet released, are working through difficulties yet still eager for the future. Dr. Than Htut Aung of The Daily Eleven told AP, “We need more time for preparation…I will print my first daily edition on May 3, Press Freedom Day, because it is very symbolic.”

The press’ significant improvements are a result of government efforts, specifically, President Sein’s attempts to boost national development and though ideas like a “sense of optimism” and “government efforts” seem vague and inconclusive, they’re important issues to widely respected press freedom rankings.

Based on criteria such as violence against journalists and censorship-inducing legislation, among other things, Reporters Without Borders 2013 Press Freedom Index has been analyzing and ranking 179 countries. This year’s index summary boasted that it was “a better reflection of the attitudes and intentions of governments towards media freedom in the medium or long term.”

Myanmar, also called Burma, is listed as one of the “Big Rises” in the report. It began climbing the rankings last year, and its place at 151 finally takes Myanmar out of the bottom 15, where it had been since 2002.

Myanmar’s 18-point jump is comparable to the United States, which rose from 47th place last year to the 32nd spot this year. But does a rise in the rankings really signify an improvement? Aside from the fact that it partly represents a decline in the ratings of those countries close in rank, the American press serves as a complex case study. How free is 32nd place? And why isn’t the USA, the “land of the free,” and ostensibly the world’s model for democracy, ranked closer to 1?

In Fighting for the Press, James Goodale argues that America’s press freedoms under President Obama’s administration are worse than those under Richard Nixon, whose administration sued The New York Times to bar the newspaper from publishing the incriminating Pentagon Papers. Goodale was the Times’ chief counsel at the time and urged them to publish, despite the lawsuit. And today, Goodale, whom Glenn Greenwald lauds as an “outspoken defender of press freedoms,” is calling out President Obama. In an interview with the Columbia Journalism Review, he called Obama’s approach to classified information and press freedom “antediluvian, conservative, backwards.” However, he’s also calling out the journalists who are ignoring it: If this were happening under John McCain or Mitt Romney, says Goodale, “we’d be screaming and yelling and journalists would be going crazy.”

One glaring censorship issue he cites is the threat to prosecute WikiLeaks. If Julian Assange is prosecuted, he told CJR, then he will go to jail for doing what every journalist does: “for gathering the news, for asking questions, for getting stories.” Related is the Bradley Manning case, which Greenwald has written about extensively. Daniel Ellsberg, the military analyst who leaked the Pentagon Papers, called Manning the “personification of the word whistleblower.” Manning, accused of handing classified material to WikiLeaks, has until recently been silenced by what Greenwald calls “extreme secrecy often exceeding even that which prevails at Guantanamo military commissions.” And it is secrecy that mainstream journalism seems to be ignoring rather than investigating—the Manning trials are often characterized by their lack of media coverage.

These issues, along with many others, like drone secrecy, highlight the unfair allocation of accountability to the law. As Greenwald put it, the problem is “that people who undertake political acts against government interests are subjected to the harshest and most unforgiving punishments even for trivial transgressions, while those who advance the government’s interests or otherwise wield power in it are shielded from punishment for more serious offenses (torturers, illegal eavesdroppers, bankers, telecoms, etc.).”

It’s hard to accept comparisons of press freedoms between countries with such starkly different challenges: in Myanmar, they are celebrating the fact that private-run newspapers can exist, while in the US, citizens can blog all day and publish newspapers all night—yet subtle or ignored restrictions cause erosion to those freedoms. On the Index, upfront laws against a free press yield a lower ranking than media manipulation hidden behind the illusion of utopian freedom and transparency? The former is blatantly oppressive, but the latter is quietly eroding democracy.