If you met 17-year-old Ayanda Xoeie on the street, he would immediately tell you his name, the neighborhood he lives in, and that he is an activist. Ayanda believes that every generation has its own struggle, and for him, this is the right to a quality and equitable education.

This past summer, five youth members from the South African township Khayelitsha collaborated with GPIA students and the nonprofit organization Equal Education. Together, we created a youth media and social activism workshop called Amazwi Wethu [Our Voices].

Too often, young people—predominantly those in underserved communities—are spoken for instead of with and lack access to the appropriate tools to create change on their own. Through Amazwi Wethu, our students became socially conscious storytellers. They gained video documentary and photography skills, and began advocating for themselves and their communities. While engagement at the policy level is crucial in a country built on institutionalized inequality, so is empowering the youth to shape their own future. 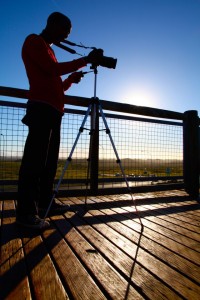 Two distinct structures make up the education system in South Africa. The first serves children from the wealthiest 25 percent of families. It is known for its established infrastructures, qualified and motivated teachers, recognized success rates, and renowned functionality. In contrast, the second system bolsters dysfunctional tendencies and poor management. Primarily based in African and “colored” communities, the second system lacks resources, quality teachers, and embedded infrastructures.

But this doesn’t stop Ayanada, he is brutally honest with himself and the people around him. He constantly questions people’s motives and never settles, nor accepts a simple answer.

True to form, he was not sold on our workshop from day one. In his exit interview, he admitted that at first he was hesitant to participate. Yet, this all changed when he began to situate himself in a global context and understood that his work as an activist could and should reach beyond a local audience.

The students produced and filmed a short piece about what it means to be an activist as a way to practice interviewing and editing skills. The piece wasn’t perfect, but it was honest and real. We put it up on the organization’s YouTube page and for fun, sent it around the office listservs. The reception it got was incredible. People were in awe of these young activists and how they passionately spoke about their rights. And for the first time, our students witnessed how powerful the Internet and film could be. 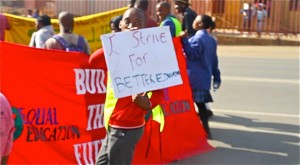 By producing a media advocacy piece and putting it online, Ayanda mobilized and incited youth around the world to join in the struggle, in his struggle. Now, I wake up to emails for Ayanda’s new Gmail account at least twice a week. I watch as his English and typing skills improve when we talk about life and school and everything in between. Ayanda now peruses the Internet on his own and recently created a Facebook page. There, he posts his thoughts on articles from Mail and The Guardian about outcome versus income-based approaches to education reform. Beyond filming and editing skills, Ayanda gained the ability to partake in conversations that matter and directly affect his life. He understands the value of his voice and for the first time, he wants it to be heard.