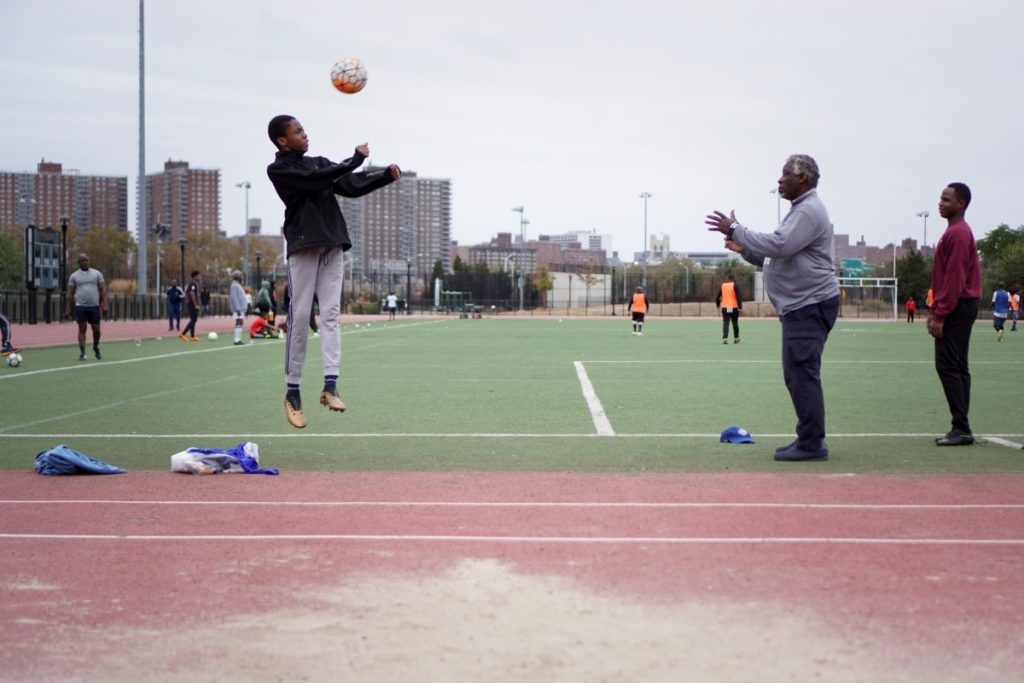 In this photo essay, Michael de Vulpillieres explores the power of soccer in creating community among West African immigrants in New York City.

Abubakar Ahmed Ali shares an apartment in Yonkers, N.Y. with his wife of nearly 17 years, Patricia. Their home is a patchwork of memories, a window into a life and soccer career spanning nearly seven decades, three countries, and two continents. From floor to ceiling, photos of African soccer legends, family members, imams, NYC public figures, and his former youth team players wallpaper their cramped living room.

On a small table at the center of the room sits a miniature soccer pitch with figurines deliberately placed. Patricia looks at the table and explains: “That’s where he works on his strategy.”

Since arriving in New York from Accra nearly 20 years ago, after a long career playing professionally in Ghana and Nigeria, Ali has overseen more than a dozen youth soccer teams in the Greater NY area, all as a volunteer. When he is not coaching, he is training kids one-on-one. He speaks with great passion and emotion about his “youth,” as he calls them, young African immigrants aspiring for success here in the U.S.

“I put everything to help the kids in the community,” reflects Ali with pride. “This is my passion.”

Every Saturday morning, the 69-year-old travels 20 miles south to Macombs Dam Park in the shadow of Yankee stadium to train African teenagers on the sidelines of a weekly soccer match where dozens of Ghanaian, Algerian, Liberian, Guinean, and Nigerian players meet up for pickup games.

The quality of play on the field is high. Current and former professionals, college players, aspiring pros, and even a former boxing world champ from Ghana come out regularly.

Ali seems to know everyone on and off the pitch, switching with ease from English to Hausa to Twi. One of several links in the Bronx to his life back in West Africa is his best friend Ahmed Yakubu Mohamed, who Ali has known since the 1960s when they played together in Accra. Mohamed drives to the Bronx from his home in New Jersey every weekend and brings his teenage grandson Mubashir, an aspiring college player, so Ali can train him. Running drills with Mubashir, Ali’s slow gait up and down the sidelines reveals the wear on his legs of a long career played at the highest level.

Ali was born in Accra, Ghana in 1950. He proudly mentions a couple distinctions within his lineage: his grandfather was a respected local imam and his father was a professional cyclist. As a man of deep faith and a gifted athlete, Ali carried on both legacies.

From a young age Ali demonstrated considerable soccer skill, rising in the ranks from youth to adult at Accra Hearts of Oak, one of the most popular and successful Ghanaian clubs.

In the mid-70s, when Ali was in his 20s, he was recruited to play in Nigeria, ultimately with the newly-established and well-financed Raccah Rovers in Kano State.

“Playing in Ghana we were amateurs,” he recalls, justifying the move. “They would only pay us a few dollars a match with a bonus of $200-300 a year.”

Ali’s transfer was part of a broader trend in the 60s and 70s in which Ghanaian soccer players joined the more lucrative and professional Nigerian League en masse.

Author Anzu Aneke wrote about this phenomenon in an essay about Nigerian soccer in the 1970s entitled In Search of Nigeria’s Golden Age: “The vibrancy and liquidity of the Nigerian game attracted players from across the region. It was even known for some players to change nationality to ensure that they gained extra kudos in the Nigerian League.” This was the case with Ali who was selected to play several matches with the Nigerian national soccer team.

After a historic win in 1978 that saw his Raccah Rovers win their first Nigerian League title, the team was selected as one of the opponents for an African exhibition tour later that year featuring Pelé. Ali was matched up against the Brazilian, then 37 years old, for one half in front of a capacity crowd in Kaduna on April 28, 1978. He remembers Pelé complimenting him after the game.

“He [Pelé] told me I reminded him of Luís Pereira,” said Ali with a smile, referring to the legendary Brazilian defender who played alongside Pelé.

After retiring as a pro, Ali shifted his focus to coaching kids and spent most of the 90s managing youth teams in Ghana.

He first arrived in the U.S. around the time of his 50th birthday in 2000. Ali does not speak much of the circumstances that brought him here, except that it was initially to help his friend, and former teammate, coach a youth team in upstate New York. But he ended up staying and quickly put down roots. Within a few weeks, he found an apartment in Yonkers, where he still lives today, found employment at a local car wash, where he worked for nearly a decade, and met Patricia, a 44-year old woman originally from North Carolina, who would become his wife three years later. Patricia, who Ali calls his “backbone,” has been actively involved in each of his coaching endeavors since they met, namely filming youth matches and practices.

Back at their home in Yonkers, a worn medal bearing the outline of the African continent sits discretely on one of the shelves. He received it after his Nigerian national soccer team made it to the final of the 1978 All-African Games, an Olympic-style, multi-sport tournament on the continent. His team lost in the final to the host Algerian team 3-2.

“I played in the semifinal, but they did not play me in the final,” he says with a mix of validation and regret. He adds: “You know, I never lost a game that I played with the Nigerian national team.”

As Ali scans the awards and photos that line the walls of his living room, his gaze stops at a huge youth league trophy won for a major tournament win in 2015 sitting atop an old TV.

“I’ve achieved a lot in my career,” he reflects. “If I had money for all my trophies, I’d be a rich man,” he adds. “But it’s not about money. Football is love, and that love has a lot of meaning.”

Michael de Vulpillieres is pursuing an MS at GPIA (Media and Culture module). In his research so far, Michael has focused on two separate issues: refugee perceptions and modern protest movements. In addition to his graduate education at the New School, Michael works as a Communications Officer at the American Red Cross in Greater NY.

Versions of this photo-essay were also published on Africa Is a Country and Welcome 2 The Bronx.