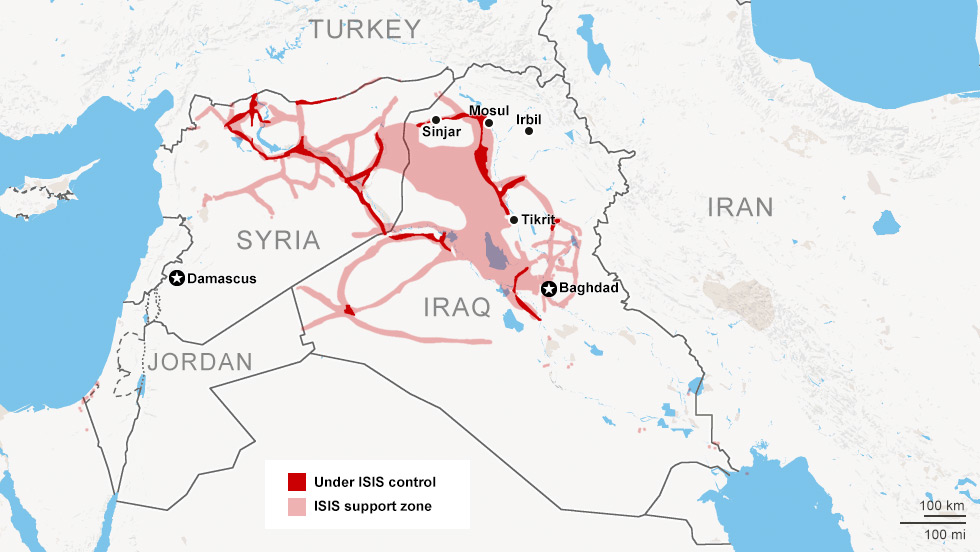 Looking at any crisis in a specific part of the world, one has to examine the roots of the conflict and the historic facts that led to the current crisis. We have various examples in this world where the crises in post-colonial states go back to the problem of the founding those states. Often, we don’t take into consideration the social, economic, historic, and geographical factors of the region.

The Middle East is a very good example. To better comprehend the roots of the Syrian and Iraqi crises we should look at the foundational problems in those two post-colonial states. Syria and Iraq were found after the French and British took over the Ottoman colonies, applying their secret Sykes-Picot agreement during World War I. As France took over what is now known as Syria and Lebanon, Britain took over what is now known as Iraq, Jordan, and Palestine. After this division, Iraq gained its independence from the British Mandate in 1932, while Syria took it from the French in 1946. Since they were one ancient civilization, Mesopotamia, the twin border states shared the same exact political history up till the end of WWI.

During the European colonization of the Middle East after WWI, the artificial border of Sykes-Picot divided the one geographic and social entity into several states without taking into consideration the social, economic, geographical, and historic factors that united the people of that region. The more severe crisis was the creation of the political identities of ethnicity, religion, sect, and tribe by colonial powers to gain influence in the region. Mount Lebanon in the 1840s to 1860s demonstrates a very good example of the influence of the colonizers in creating the Druze and Maronite political identities. During the civil war between the two sects, the French claimed the support and protection of the Christian Maronites and the British claimed the support of the Druze. The political clashes between the two colonial powers also reflected clashes between the two sects in Mount Lebanon in that period of history. Those newly created political identities within the newborn states were institutionalized and formed the base of the constitutions creating the new states. For instance, after creating Greater Lebanon by adding Beirut, Tripoli, Sidon, Tyre, and the Bekaa Valley to Mount Lebanon, the sectarian division was institutionalized, which made it impossible to have a secular state. The confessional democracy led Lebanon to several clashes and civil wars in 1958 and again in 1975. The problem with the Lebanese state is a foundational one first, the artificial colonial borders that split Lebanon from Syria. Second, institutionalizing the sectarian division led Lebanon to become a failed state.

After the American invasion, the Lebanese model of institutionalizing the sectarian division was also applied in Iraq upon the collapse of Saddam Hussein regime. This took Iraq from a totalitarian regime to an institutionalized sectarian/ethnic regime. The new confessional democracy in Iraq also weakens the state and makes it impossible to have national unity given the sectarian and ethnic division within the state. Within a short period of creating the new confessional democracy in Iraq, the sectarian and ethnic division led to a civil war. Some would suggest that the sectarian central government helped produce a radical Sunni extremist group in the north, part of which was demonstrated with the Islamic State of Iraq and Syria (ISIS), the Islamic State (IS) today. Putting aside the geopolitical interests of the neighbor states and governments and the political funding of these terrorist groups, would those groups have taken over if we had a secular civil central government? Looking back to history, doesn’t the creation of political identities like Sunni, Shia, Kurd, Alawi, and Yazidi have direct influence on the current situation in Iraq and Syria today?

Today the Islamic State terrorist organization doesn’t recognize the colonial border between the “Sunni Iraqis” and the “Sunni Syrians.” But it surely does claim the inferiority of the other sectarian and ethnic groups such as Shia, Christians, Kurds and Yazidis. I will not dig into the the support that this organization is or might be getting from regional states as an investment in their political projects. I will stick to the internal crisis of those states. IS is found in every sect and ethnic group in the Middle East. Each political identity created throughout the years of colonization has the tendency to fight for its own existence and claim the inferiority of the other groups. Getting to the Syrian war, what is the percentage of the secular Syrian armed rebels in the Syrian opposition? Don’t most of the armed rebellions secretly claim their war against the “Alawi” regime? This explains the support of minority groups such as Christian, Druze, and Alawis for “non rebellion acts” against the Assad regime. Can we deny that the current war in Syria and Iraq is mostly sectarian? Can we deny that the armed rebellion against the Iraqi and Syrian governments is mostly a sectarian rebellion rather than a secular, civil, national one? Of course we can’t deny the existence of civil and secular opposition to both governments, but my argument here is to show the bigger image of the conflict in those two post-colonial states.

The conflict in Syria and Iraq is redrawing the map of the Middle East and this is clear in northern Iraq and Syria where the Islamic State took over and removed the borders. The results of the current war will draw new borders and the possible defeat of the (IS) terrorist organization might also redraw the borders between the two states.

A new form of national identity based on one history, one geography, one culture, one civilization, and one destiny can help dissolve the artificially made political identities.  This can help absorb and melt all the social divisions and create one form of “bigger” identity. Finding new political parties that are trans-ethnic and trans-sectarian (some are found in Syria but not in Iraq) that would unite people is key for a solution. This would push for political competition for power based on programs rather than political identities. Creating modern institutions is a very important tool to dissolve the social institutions like the tribes, families, and sects. Democracy requires a long process and it is not attainable before dissolving the political identities, creating modern institutions, and achieving national unity. A new social contract should be introduced and institutionalized by a new constitution for those countries. Iraq, Lebanon, and Syria—the states that were divided by the colonial powers and that face similar political, social, economic and security challenges—should consider forming a union similar to the European Union in order to face those challenges with one hand. A form of union between states of similar cultural and social composition might also be an introduction to merging the states into one modern secular state.