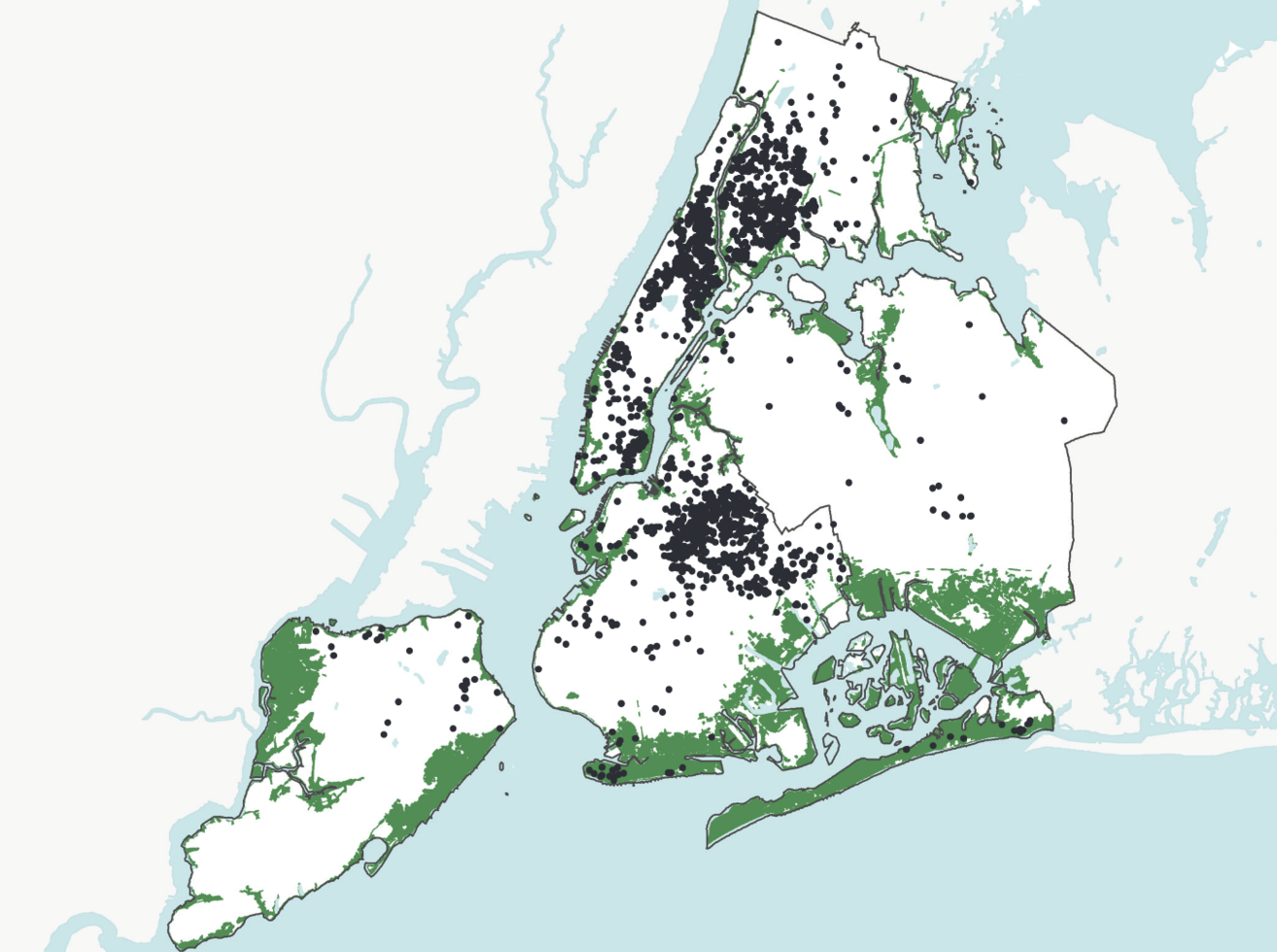 New York City has 178,000 units of affordable rental housing that are privately owned by Community Development Corporations (CDCs) and receive government assistance through the U.S. Department of Housing and Urban Development, the Mitchell-Lama program, or the Low Income Housing Tax Credit program. According to a research conducted in the aftermath of Hurricane Sandy by the Furman The Furman Center (2013), this stock was affected by Sandy where 248 subsidized buildings, with about 24,500 units, are located in areas reached by Sandy’s surge. NYCHA’s public housing stock, comprising of over 178,000 units, was most severely impacted, with 20% of its total units located in Sandy’s surge (roughly 35,000 units). While the vulnerability to NYCHA’s housing units has received quite some coverage both overall (The Alliance for Just Rebuilding et al., 2014) as well as in localized neighborhoods (Kasakove and Williams, 2019), CDC owned housing has not.

During the 1980s most CDCs specialized in housing at a time when the non-profit housing sector was changing as a result of federal cutbacks. Although CDCs were not created a response to these cutbacks – their community-oriented goals have always been much broader than housing – the movement gained prominence after the cutbacks in the 1970s and 1980s (Stoutland,1999). This housing stock is important because it not only serves the low-income, the very low-income (living below 30,000$ a year), the homeless and mentally ill people of New York City. Any loss of these affordable rental units represents an overall loss of affordability overall.

In September 2019, Zef Egan, sustainability consultant for Hope Community Inc, one of five CDCs part of the Northern Manhattan Collaborative (NMC), reached out to the Urban System Lab (USL) at the New School where I am currently working. At the time I was taking the phenomenal course ‘introduction to GIS’ taught by Stephen Metts and I was eager to use my recently acquired GIS skills at the service of community groups working against systemic injustices and climate change. During a meeting with Zef and Timon McPhearson, Director of the USL, Zef summarized the challenges that Hope Community Inc. was experiencing due to inland flooding in East Harlem and the need to understand how flooding impacts will constitute a financial burden for Hope and other CDCs.

During subsequent meetings with Zef, we realized that studying inland flooding was not going to be possible to a satisfactory level, largely due to the combination of lack of flood modeling skills and accurate data. I proposed to focus on coastal flooding rather than inland flooding. This made sense since many CDCs owned housing in East Harlem are within FEMA’s 100-year floodplain and had been affected by Sandy. This could be the first stepping stone in a longer attempt to advocate for evidence-based research on climate change impacts among CDCs. Ascendant Neighborhood Development, through Maggie Calmes and Eddy Almonte, also joined and made available their property data for the mapping project and more GIS skills.

While the whole study and maps are available on the scholarly open access platform Authorea, I report here major findings. The study used the 2015 FEMA 100-year floodplain and future projections by the New York Panel on Climate Change (NYPCC). Results show a great exposure of especially Hope Inc. (total 78 properties) where by 2018, 84% of their properties may see flooding. The yearly rate of change in flooding of Hope properties (4.9%) is also more than double than that of all the properties in East Harlem (2%). Ascendant’s properties are less exposed going from 12% in 2015 to 38% of their properties possibly affected by flooding by 2080.

In terms of socio-economic vulnerability, we considered three variables that can compound the threat of CDCs housing units to present and coastal flooding in East Harlem. This analysis also included all the properties of the Northern Manhattan Collaborative (NMC), totaling 157 properties. The variables include the population in low income census tracts ($30000 or less for a family of four from the ACS 2017 5-year Estimates), the census tracts affected by the recent East Harlem Rezoning Plan and the date of expiring rent subsidizations from city, state or federal programs for each unit. Once again Hope properties (19 out of 78) are between the 90-99% confidence level of the Hotspot Analysis, meaning that there is between 90 and 99% confidence that these lots feature more prominently among those that are affected by changes in rezoning, rent subsidy expiration, higher rates of low- income residents and current and future floodplains. Importantly, NMC properties show higher vulnerability than all properties in East Harlem. 37 of 157 (24%) of the NMC properties are within the 90-99% confidence level.

This study opens up a series of relevant and timely questions about the future of private corporation owned affordable housing in NYC. CDCs owned properties are important for the city because lower-income people traditionally serviced by NYCHA or shelter housing are now both overcrowded. Also, New York city housing has been shifting in favor or more middle and high-priced rentals, in a glaring erosion to the inventory of rent regulated housing. Through this analysis we showed that CDC owned housing may be affected by not only increasing rates of coastal flooding now and into 2080 but also by the compounded effect of changes in urban zoning and rent subsidy expiration, which can both affect the present and future viability of the CDCs model.