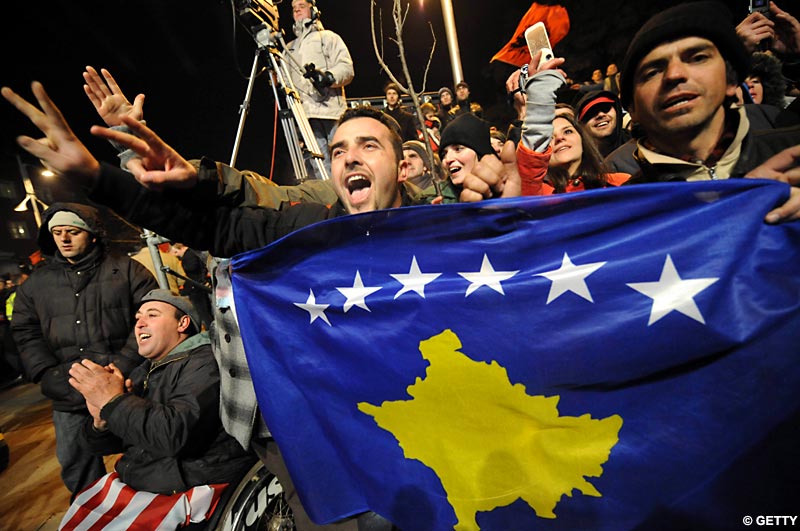 Kosovo, whose Assembly in Pristina asserted the country’s independence from Serbia in 2008, is in a constant struggle for nationhood. While Kosovo is recognized by 98 countries, those with separatist anxiety, such as Spain, or disputed territorial claims, such as Argentina, reject the independence of the former Yugoslav province because it is seen as illegitimate by Belgrade and its patron, Moscow.

After Kosovo’s 1998-1999 war with Serbia, hundreds of thousands of Albanian refugees came home to bloodstains, ruins and foreign troops. The damaged nation became an international project, administered by the United Nations Mission in Kosovo (UNMIK created a constitution) and NGOs for most of a decade, and monitored by international peacekeepers (NATO’s Kosovo Force, KFOR). Today, as foreign presence continues to dwindle, while Kosovo still has a major European controversy: an ethno-national divide with parallel institutions for Serbs and Albanians around the city of Mitrovica and areas north bordering Serbia. In short, both Kosovo’s internal identity and how it is perceived abroad have a unique significance.

“Land of Disillusion,” the cover story of Kosovo 2.0 magazine‘s inaugural print issue—titled “Image”— discusses the limits of UN nation-building and the resulting loss of hope for a more perfect country both locals and interlopers have experienced. After a Swiss report in 2010, which tarred Kosovo’s higher-ups as an organ-trafficking organized crime syndicate, went public and was submitted to the Council of Europe, “a sense of collective shame emerged,” writes 2.0′s editor in chief Besa Luci in her editor’s letter. “We wanted to explore the constant preoccupation in Kosovo of trying not to look bad.”

Originally created as an online journal to capture young voices, the Kosovo 2.0 team began printing a collection of journalistic essays and photos wrapped in a sturdy graphic art-design format in 2011. Published in Albanian, Serbian and English, there are now four issues, each focused on its own subject.

The magazine’s second issue, “Corruption,” addressed Kosovo’s institutional dysfunction and the complicity of its public. The extended title of the cover story reveals a comprehensive critique: “No one to blame when everyone is at fault: In Kosovo the responsibility for corruption is as elusive as the mechanisms used to fight it are impotent.” However, an in-depth interview with a dismissed general director of the Kosovo Police Service, Reshet Maliqi, points out exactly where the blame begins: prime minister Hasim Thaci and his administration.

Before it was read or even glimpsed, the latest issue of 2.0 tested Kosovo’s social conservatives and moral reactionaries with its unprecedented exploration of the taboo.

On Friday December 15, 2012, a series of performances and a party dubbed “Night of Sex” were to take place at the Prishtina Youth Center for the launch of 2.0′s Sex issue. One of the organizers was prominent Lesbian Gay Bisexual Transgendered (LGBT) rights activist Igballe Rogova, and as a portion of the magazine was devoted to the LGBT community, so was a portion of the evening. The event had been publicized for weeks—and as it drew near, Rogova received threatening phone calls and texts.

Though Rogova made sure there was a police presence at the event, a gang of about twenty young men overwhelmed security officers with mace and clubs, beat up a male staff member and ransacked the event space, destroying a stage, set and electronic equipment.

As reported by Balkan Insight:

The Pristina football fan group Plisat announced on its Facebook page that it had taken an action against “pederasts” and “demolished the Red Room,” where Kosovo 2.0 was to hold its magazine launch. “Our past and culture do not allow these degenerate and anti-family ‘cultures’ to be promoted in our midst,” Plisat said in the statement. “Plisat will take action against these degenerate characteristics in the future as well.”

That Sunday, a celebratory gathering by another LGBT group in Prishtina, Libertas, was attacked: seven men beat up a female member and tried to force themselves into the party. 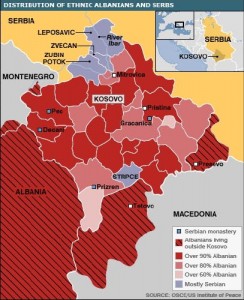 The same weekend was the Prishtina Youth Summit, confronting teenage nationalism in Europe—a serious problem in the former Yugoslavia. The 150 or so Summiters rallied in support of Kosovo 2.0. The attack was denounced by the U.S. embassy in Kosovo, and the requisite European officials and human rights NGOs. Thirty organizations signed a written statement that called on authorities to pursue those responsible, according to Balkan Insight. Reported Gay Star News

[Gay rights groups] Aleanca LGBT and Pro LGBT urge Prime Minister Hashim Thaçi to stand up for ‘freedom of speech, the right to identity, the right of peaceful assembly and freedom of information.’

They added: ‘We also call upon the President of Kosovo Mrs Atifete Jahjaga not to forget that she has the duty to stand up as a woman and protect women rights, LGBT rights, and human rights.’

Anna Di Lellio, professor of international affairs at The New School and political communication at New York University, added a new context to Kosovo’s LGBT struggles. She wrote for Albanian daily newspaper Zëri about the very long fight for gay rights in the U.S., pointing to recent cultural progress as hope. Forty years after the Equal Rights movements of the 1970s, homosexuality is finally becoming normalized in certain conservative and religious corridors. The new Kosovo is barely five years old.

Remember when wearing red and black was considered a criminal offense? When flushing a picture of Tito down the toilet would cost years of jail?  When shouting “Kosova Republike” would call for a good beating? When reading [Albanian national poem] Lahuta of Malcis was a crime?  Today Kosovo is free. It has a Constitution that protects the freedom of expression and movement of everyone. Kosovo 2.0, a magazine that neighboring countries envy for it openness, is trying to exercise its right to expand this freedom.

These instances of open prejudice against the LGBT community can be seen as the familiar tandem of hooliganism and bigotry from Europe to South America. Undeterred, the 2.0 staff, LGBT organizers and 200-plus guests continued the launch event until a social statement against the “Night of Sex” party and what it symbolized came in the form of heated protest.

Kosovo 2.0 staff posted a letter on Facebook explaining the night:

At around 10:30 a group of over 100 protesters approached the building, yelling epithets such as “Out pederasts!” and “Allah u akber!” Despite the police presence, we decided to be safe rather than risk the safety of our staff and guests in the building. We had to be evacuated out by the police in small groups so as not to provoke the crowd.

This crowd had been encouraged by Kosovo’s conservative voices, particularly Muslim leaders who imply—even in the media after the attack—that intolerance toward homosexuality is righteous. But this was not a representation of Kosovar Muslims.

In response to the December 15 assault, Kosovar writer-reporter Dimal Basha (a New School international affairs master’s student) fired off a missive in Albanian on Gazeta Express pointing out that a trend toward Islamic conservatism is being foisted upon Kosovo:

Taliban Albanians are a disease in our society. If left untreated and you intervene late, just like cancer, it is unlikely there will be a cure for it. Such militants aim to slaughter reason.… These mililtants do not provide protection of god’s values but their bastardization, because an omnipotent god does not need to be defended by the biggest idiots in our village.

A KOSOVAR BRAND OF ISLAM

For more than forty years, all religion in Yugoslavia was suppressed under Communism. Before, during and immediately after Party rule, Kosovar Muslims mostly practiced a “minimal” Islam based both on Ottoman Sufi and Hanafi traditions. But this was before an ethnic cleansing campaign by Serb paramilitaries and the subsequent war and NATO intervention. Although arms and jihadis sent by theocratic Arab countries were repelled,

the process of religious transplantation in Kosovo began in 1999…. Salafism was imported to Kosovo by certain Islamic organisations operating under the banners of humanitarian agencies. Interviews … with prominent politicians and law enforcement officials in Kosovo confirmed that Islamic organisations have been operating in Kosovo for almost a decade now, and have managed to create influential social networks that aim to penetrate inside Kosovo’s Islamic community, and to reshape the ethnic Albanian national identity into a religious one. Although many of these organisations do not have a radical or violent agenda, certain organizations propagated more extremist views.

Unheard of until 1999, the religious conservatives and hardliners are a tiny but increasingly visible group, with followers in all the big cities and some of the poorest parts of the countryside.

The third issue of Kosovo 2.0, “Religion,” offered a core question: Will this society, a vast majority of which is some degree of Muslim, retain its secular identity—derived from both Communism and Constitution—in the face of a conservative Islamic movement? While its stories and photographs show how religion reflects culture, values and history, the magazine implicitly admits that the specter of radical or even political Islam is pretty far down the list of national concerns.

The IHS Jane’s report, the BIRN piece and 2.0′s Religion issue tell of the same few examples of controversy and violence that can be labeled hate crimes. However, they also mention the appeals to the Constitutional Court by pious Muslims who believe the headscarf ban is wrong.

The Constitution was finalized in April 2008, two months after Pristina pronounced its independence from Serbia. The document allows for freedom of faith and a strict separation of religion and state. While certain officials, such as the interior minister Bajram Rexhepi, have called for stricter laws aimed at breaking up “radical sects,” observers from the UN and pan-Europe groups don’t see Islamic extremism as an immediate threat worth curbing civil liberties for—Muslim discontent is a more serious issue in Western European capitals. According to BIRN and Balkan Insight

“Based on a security assessment by the international community in Kosovo, at the time in question there was no need to legislate against Muslim radical groups,” says Olivier Salgado, a spokesman for the UN mission in Kosovo.

Behxhet Shala, the head of Kosovo’s main human rights body, says the risk of extremism has been underestimated by the United Nations and the EU, which are gradually phasing out their role in the territory’s day-to-day affairs. “The internationals are here today, but they will go back. They are leaving us with a ticking bomb,” Shala told BIRN. He says Kosovo’s poverty and porous borders make it a fertile ground for radicalism.

However, Jean-Francois Fitou, the French ambassador in Pristina, says these conditions are not unique to Kosovo. He says all potential threats must be taken very seriously. But, he added, the response must also be weighed against any potential harm to individual liberties.

Pristina has shown commitment to a secular public sphere while not alienating conservative Muslims with oppressive measures. Pockets of extremism are being observed by authorities. But it’s clear that reactionary government tactics would fan the flames of those looking to identify as victims of forced secularism. That said, the recent attacks on LGBT groups must be used to challenge lax policies on punishment of hate crimes and intimidation, and to strengthen institutions of justice.

Ultimately, it is the conservative Muslim community that has the most to lose by permitting a fundamentalist movement in its midst—and the most to gain from reaffirming a Kosovar brand of pious Islam that airs its grievances with the government in the Constitutional Court.

An imam of the popular Grand Pristina mosque, Shefqet Krasniqi, who has preached that its a sin to vote for progressive Vetevendosje party, should not seek to create a Muslim identity that supports intolerance for political gain. Conservatives must denounce political Islam and tolerate living among those they have dogmatic disagreements with. In turn their social practices are less likely to be demonstrated against or outlawed. If clerics can accept an LGBT community, maybe they will avoid being conflated with imported fundamentalist sects such as the Wahhabis and the Salafists. Then maybe, a few years down the road, headscarves could make a comeback.