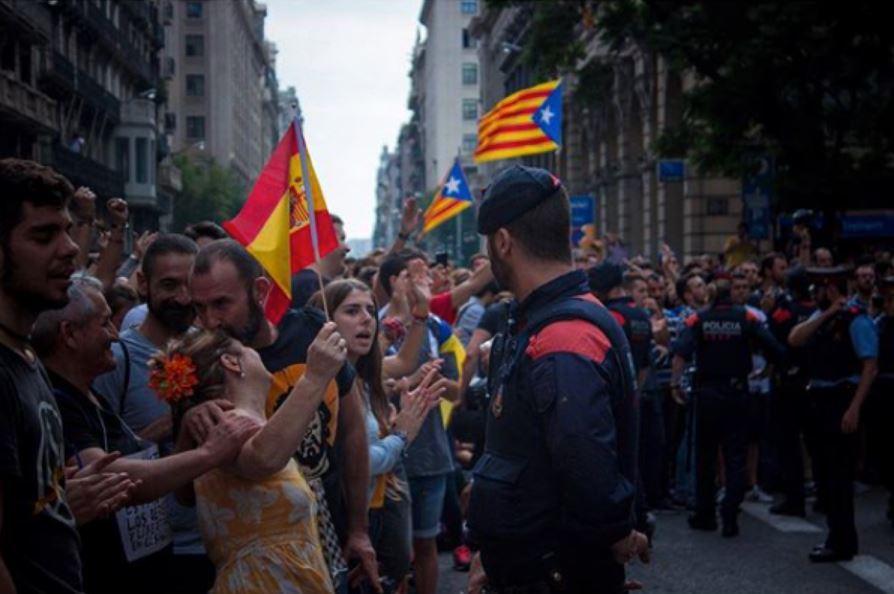 Catalonia in protest, a response to the Spanish regional government’s actions during and after the October 1st referendum (Photo: © Joan Mateu-Parra @jmparra, Barcelona, October 2017)

A Forum for Dialogue through the United Nations

What do you do when something is illegal but necessary? Who do you look to when your country is quite literally, being ripped in two? As the self-determination vote in Catalonia became violent, as police were injured and civilians were left bleeding on the sidewalk, I wondered, who has the power to facilitate meaningful conversation between the Catalans and the Spaniards? Whose symbolic power can force a necessary dialogue? As I walked down First Avenue, an ocean away in New York City, the answer came to me. Of course: The United Nations, a catalyst for cooperation.

Since 1994, the Trusteeship Council, a principal organ of the United Nations, has not had an annual obligation to meet. The Council, which was created to promote the advancement of the inhabitants of Trust Territories, a territory under the trusteeship of the United Nations seeking independence, and their “progressive development towards self-government or independence”, currently has no specific role, and meets only as “occasion require[s]”. Since the independence of Palau, the Trusteeship Council has been wallowing in randomness. Still funded by the UN regular budget, the Council has no current cause. It’s time for them to take on a modern-day version of their original obligation.

Many of today’s nations have emerged from the dissolution of empires, gaining independence through the the Trusteeship Council. Nationalism was a way for territories to promote a sense of identity, unite people, and promote self-governance. Today, nationalism begins to threaten the dissolution of sovereign states. The independence movement in Catalonia is no exception, for it represents a collision between a reasonable demand for national self-determination and the reality of a state’s sovereignty.

Catalonia, a region that is home to 7.5 million people, has sought to limit Spain’s authority over its wealthy corner of the Iberian Peninsula, as the national authority continuously attempts to undermine Catalonia and its regional government, chipping away at their language, laws and customs. It has become increasingly difficult for Catalonia and its culture to remain free from the strings of its larger governing state.

After years of attempted and unsuccessful dialogue, the Catalan government called for a vote, held on October 1st, 2017. This referendum violated the Spanish Constitution. In order to stop the referendum from taking place, the Spanish government called on the Catalan police to stop the voting. The day quickly descended into chaos. Police shattered glass doors, kicked civilians to the ground and burned voting ballots. The Spanish government praised Spain’s ability to be “an example to the world”, for dealing with an illegal referendum and stopping breaches of the rule of law at all costs (BBC). The head of Catalan’s regional government condemned the violence and further intimated that Catalonia had “gained the right to be an independent state”.

Nationhood and autonomy of internal territories are issues that transcend North-East Spain, reaching Kurdistan, Canada, Tibet, and a multitude of other countries worldwide. Though these independence movements are perhaps contained for now, there is no doubt that they could potentially permeate global politics in the future. Though the United Nations is cautious when it comes to interfering with conflicts occurring within sovereign states, this is an overarching issue that the United Nations should not dismiss, one that is gaining urgency.

While the sovereignty of states is of utmost importance, we cannot deny the many ways in which the unrest between nations can affect states on a global scale. To resolve conflicts within these territories with the help of the United Nations would allow for greater conflicts to be avoided in the future. The United Nations holds an undeniable symbolic importance, one that transcends territories, boundaries or states. The leverage of an international governing body is in holding the power to facilitate dialogue without having to infringe on the sovereign rights of a state.

If the United Nations Trusteeship Council was created to help facilitate the independence of colonized land, is it so far off to propose that they require and facilitate meaningful dialogue among states and territories who wish to become independent? If the Trusteeship council takes on this role, it has the potential to avoid the many violent outcomes that occur as a result of illegal referendums and minimizes the costly, violent aftermath of such proceedings. After the illegal referendum in Catalonia, according to BBC, 1,066 people sought medical treatment. These are citizens, angry and unhappy living in a democracy that doesn’t care about their culture or their right to the “principle of self-determination”. If the United Nations would acknowledge the dangers of such illegal proceedings, and provide a respectable space in which both parties could come and converse with third party oversight, perhaps some consensus could be reached. Without the pursuit of political asylum for the head of government, and without the countless beatings of civilians as a possible outcome, more could be amicably resolved.

Our world is increasingly interconnected, so what happens in one place undoubtedly triggers what occurs in another. The United Nations Trusteeship Council must facilitate dialogue through which sovereign states can cease conflict in regards to self-determination. While the outcome of this dialogue does not have to be independence, it would allow for both parties to be heard respectfully, equally, and allow for different degrees of self-governance to be achieved.

1 thought on “Nations Within Nations”