No Church on the Neoliberal Reservation: Critical Perspectives on Labor Organizing in the 21st Century 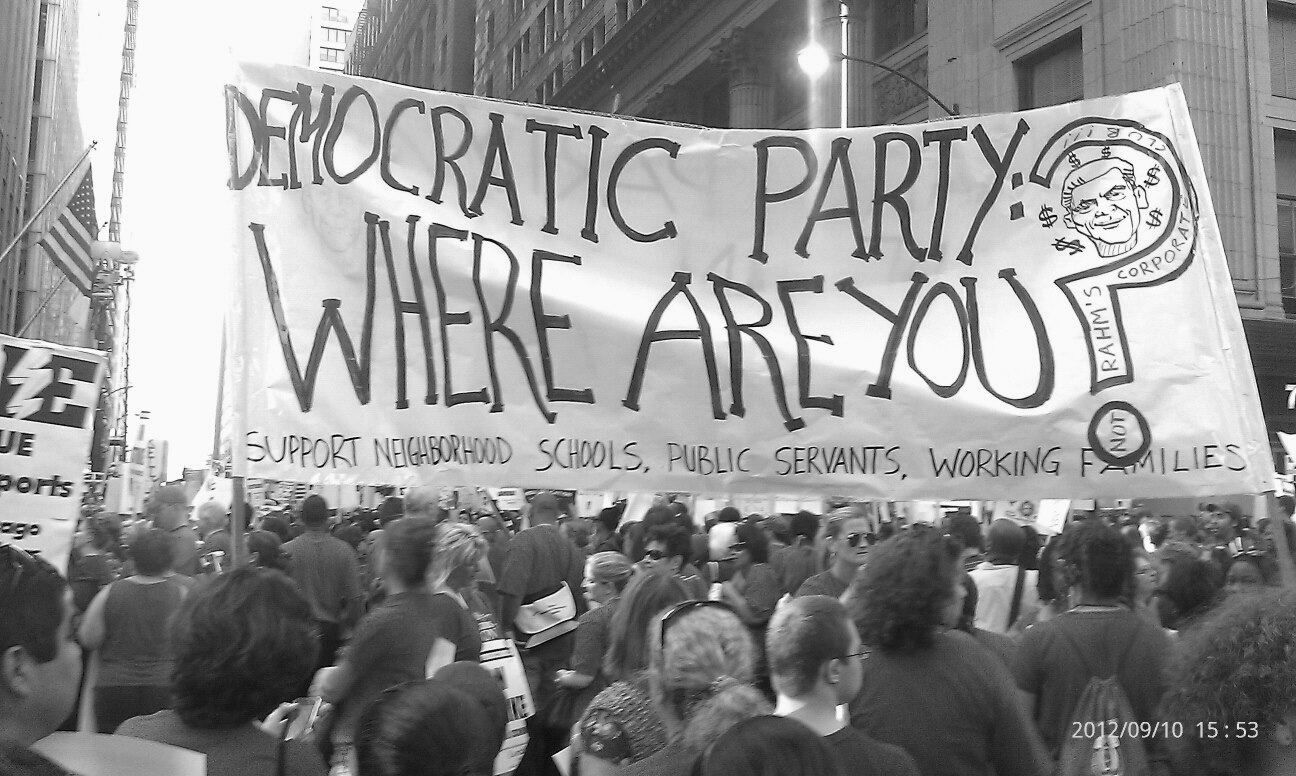 Human beings in a mob
What’s a mob to a king?
What’s a king to a God?
What’s a God to a non-believer?
– Frank Ocean

On November 29, 2012, fast-food workers in New York City walked off the job. The strike, which affected more than two dozen locations, was the largest action involving fast-food franchises in U.S. history. Workers and supporters rallied outside branches of major chains and demanded a living wage. The fast-food strike arrived just days after Walmart employees throughout the U.S. walked off the job on “Black Friday” to protest unfair pay. On January 16, 2013, school bus drivers in New York City went on strike for the first time in more than thirty years. These are emblematic of what has been called a “global strike wave.” [i]

While Marxists and neo-Marxists have been quick to champion this as the re-emergence of a historically preordained working class struggle, scholars and activists should be wary of dogmatic revolutionary rhetoric. Tracing the development of neoliberalism as a discursive political and economic project reveals how contemporary worker strikes are both enabled and constrained by the very neoliberal logic against which they often protest. Consequently, labor and progressive social movements must combat neoliberalism’s further entrenchment of inequality through innovative methods instead of worshipping at the altar of activism from a bygone era.

Neoliberalism remains a contested term. Instead of attempting to derive an all-encompassing definition, the emphasis here is on the policies taken up under the banner of neoliberalism. In “How Neoliberalism Makes Its World,” Timothy Mitchell argues that think tanks have been instrumental in making it a dominant ideological force and have “transformed neoliberalism from an intellectual philosophy into a set of political tools.” [ii] Proponents of neoliberalism succeeded in legitimatizing think tanks as a public policy forum, changing how information is rendered appropriate for popular consumption. The lasting effects are nothing less than a full-scale reorganization of the world. Mitchell refers to this world as a type of “reservation,” which, unlike the “wilderness,” is deliberately constructed to privilege certain outcomes and possibilities over others.[iii] To adapt to this “reservation” where ideas are filtered for mass media, social movements across the spectrum are adopting these methods of political engagement. So-called progressive think tanks have sprung up, producing their own cadre of “second-hand dealers in ideas.”[iv] Social organizing has become increasingly technical and formalized, sparking countless organizations and affiliated groups described as the nonprofit industrial complex.

Abiding by market-economy logic in order to survive within the harsh climate of unencumbered global capitalism, nonprofits and movement organizers employ professional marketing, brand recognition and public relations to present their causes to a mainstream audience. In preparation for the fast-food workers’ strike in New York, consultations were held with for-profit strategy firms to coordinate social media and press outreach.[v] Merchandise, such as hats and T-shirts, was commissioned and distributed at rallies to ensure image cohesion. These are the tools used by neoliberal advocates to heighten the visibility of and, ultimately, to sell their ideas.

The growing influence of neoliberalism and its market logic represent an acceptance of the commodification of the socio-political sphere. Strategies for social change are generated by a professional class of knowledge producers, often billed as experts, and are available to the highest bidder, perpetuating the buying and selling of ideas. A reliance on progressive think tanks and PR firms neglects other forms of knowledge-sharing that are accessible to the masses and devalues grassroots systems of educating the public.

Hierarchies of specialized knowledge are replicated, excluding those without access to those privileged networks. During the November fast-food strike, the delineation between the workers and the labor “experts” was glaring. The fast-food workers were mostly immigrants from Latin America and the Caribbean, and the self-proclaimed labor intellectuals were overwhelmingly white U.S.-Americans. The experts were afforded a considerable amount of speaking time because of their supposed familiarity with the domestic labor climate; the striking workers provided the bodies. As such, the very people risking their livelihood in a public show of defiance went unheard.

Many recent labor movements have been unwilling to acknowledge the neoliberal indoctrination that severely limits expansive social change within the modern political structure. In the run up to the 2008 and 2012 presidential elections, labor unions, and other avowedly progressive organizations, overwhelmingly supported Barack Obama. This is not surprising as many of these larger organizations have voted along party lines despite  the absence of progressive legislation or substantial policy changes by elected Democrats.[vi] The two major political parties in the U.S. have coalesced around free market ideology. So far, the Obama administration has been unwilling to advocate on behalf of those most vulnerable, evading conversations about the poor, despite growing poverty and homelessness in the U.S. On the contrary, the White House has opted to herald the entrepreneurial spirit of the middle class. Furthermore, the surge in private funding of candidates during elections has undermined the legitimacy of U.S. politicians. Given this brave new world of neoliberalism, radical social movements cannot rely solely on their elected representatives or 20th century political strategies.

The spread of neoliberalism has also redefined contemporary class-consciousness, utilizing the heightened visibility of wealth to champion it as a virtue. Advertising firms, 24-hour news networks, music, film and social media have all sewn wealth-as-success into the public imagination, selling the narrative that it is achievable for everyone and hiding the reality of growing income disparities. This aspirational component of wealth destabilizes solidarity efforts around class, as lower income populations are sold dreams of middle class incomes, and middle income communities are sold dreams of upper-middle class incomes.

Similarly, worker strikes often revolve around wage disputes. In New York City, fast food workers were demanding an increase in compensation from $7.25 per hour to $15 per hour. While addressing workers’ quality of life, wage negotiations do not address fundamental flaws in neoliberal policies, such as regressive tax policies, the privatization of public schools and the curtailing of community social programs.

In “Neoliberalism as Creative Destruction,” David Harvey contends oppositional movements are reorganizing in ways “radically different from the worker-based movements” of earlier eras.[vii] Yet Harvey does not “rule out the resurgence of worker-based politics with a strongly anti-neoliberal agenda.”[viii] My analysis, detailing ways in which labor rights movements are incorporating the same deleterious neoliberal logic that oppresses them, suggests that a worker-based platform is not only unlikely, but also not preferable. Social activists should eschew belief systems based on historical precedents of social change in favor of strategies that will attract a wide, diverse base of participants to their movements—as well as empower traditionally marginalized communities. Such movements may have unexpected leadership.

In December 2012, speaking to Service Employees International Union, one of the largest U.S. labor unions, Angela Davis declared that the immigrant rights movement is the defining civil rights movement of the 21st century. For Davis, advocacy for fair treatment of immigrants in the U.S. and around the world enabled expanded participation by simultaneously addressing issues such as racism, xenophobia, poverty, incarceration and education. But what gave Davis the most hope about the future of the immigrant rights movement were the young students and activists leading the charge and risking deportation to assert claims about their humanity. This type of social movement, that is “tearing aside the neoliberal mask and exposing its seductive rhetoric,” shows a new way forward.[ix]

[v] Information regarding the fast food workers strike in New York City was obtained through informal interviews I conducted with organizers and striking workers at demonstrations on November 29, 2012.