Opening the closet door of policy: Gay rights promotion in the U.S. will be felt globally 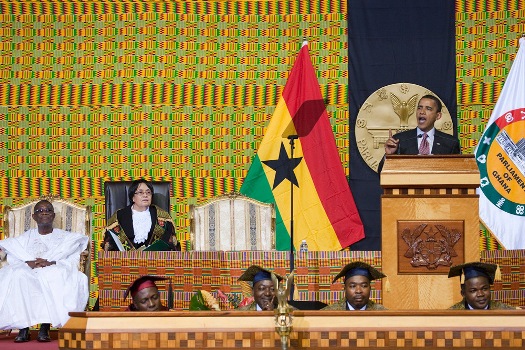 President Obama’s open support of gay rights in his inauguration speech may have ruffled the feathers of Republican lawmakers in Congress and their constituents, to say the least. But in the international context, the president’s vocal backing has the potential to improve attitudes toward homosexuality—particularly in many developing countries of the global South, where Obama’s image has been celebrated and is considered a symbol of empowerment to the oppressed.

If he uses his post-election momentum to push through substantive policy for gay rights, even if only indirectly at the state level, its historical relevance could also trigger similar policies around the world and bolster the efforts of global and local gay rights groups.

France’s recent outbreak of religiously motivated protests against gay marriage has shed light on the varying degrees of acceptance towards gay people in wealthier, industrialized countries. This came as a surprise to many—including its own political elite—as France has been at the forefront of progressive social legislation in European politics, not to mention its informal cultural legacy of sexual liberalism (which may or may not be fairly characterized). Passage of gay rights legislation in the U.S. would pressure European leaders to follow suit.

In lower income countries, marginalization of gay people can be even more intense. Jamaica, for example, has been host to a pandemic of violence towards its gay and transgendered citizens, with at least 35 murders related to homophobia since 1997, leading to international boycotts of the island nation’s tourism industry.  This anti-gay vigilante subculture has been documented in the New York Times as well as in the 2008 independent film Taboo: Yardies by Brooklyn filmmaker Selena Blake.  In a country where 82 percent profess themselves to be homophobic, the gay population remains dangerously isolated and organizes politically at its own risk.

With that in mind, it’s important to look at the trajectory of the gay rights movement in the U.S.  As with any civil rights movement, it was based on dismantling systemic inequality and was a response to the lack of protection against human rights infringement and abuses. Unlike the gay community, the black civil rights movement of the 1950s and 1960s had an inherent geographical advantage of community organization due to the close living proximity of its members, as they often tended to live in the same neighborhoods or went to the same churches. The gay rights movement was more easily suppressed, as it was often comprised of isolated individuals or groups with less cohesive community or peer support.

The most powerful tool for political mobilization among gay individuals in the historic past, then, has arguably been the public display of Coming Out. This shedding of shame and social stigma has been an empowering and validating force for those alienated by sexual orientation. From figures such as Harvey Milk and Barney Frank to Ricky Martin and Wanda Sykes, coming out was a compelling political statement that was told through a tale of personal struggle. It reached those same marginalized pockets of society, effecting change through group formation and, subsequently, political advocacy.

The Coming Out of today, however, is policy oriented.  It involves outing your stance on gay rights in a way that is clear, explicit, and decisive.  In order for such a social transformation to have a stronger global resonance, these paradigm shifts must now be founded on concrete political commitments.

One of the developments that Blake’s documentary successfully analyzes is the radical change in behavior that certain Jamaican emigrants undergo toward gay people when they arrive in the more gay-friendly U.S.—those who in their homeland have reacted violently to the open display of gay and lesbian lifestyles deemed unjustifiable by certain provincial values. The informal acceptance of gay lifestyles that exists in the Jamaican community in the New York has reverberated throughout communities in Jamaica through social ties.

Likewise, Obama’s endorsement of gay rights legislation has the transformative potential to garner support for gay rights advocacy on both a national and international scale on the policy level. For that to happen, it must now materialize in the form of formalized rights and protection. In its own capacity, the cultural influence of the U.S. has helped foster political models for ground-up community-based organizing towards gay rights protection and equity. Politically, it can call on other governments to act.