The Relationship Between Power and Identity 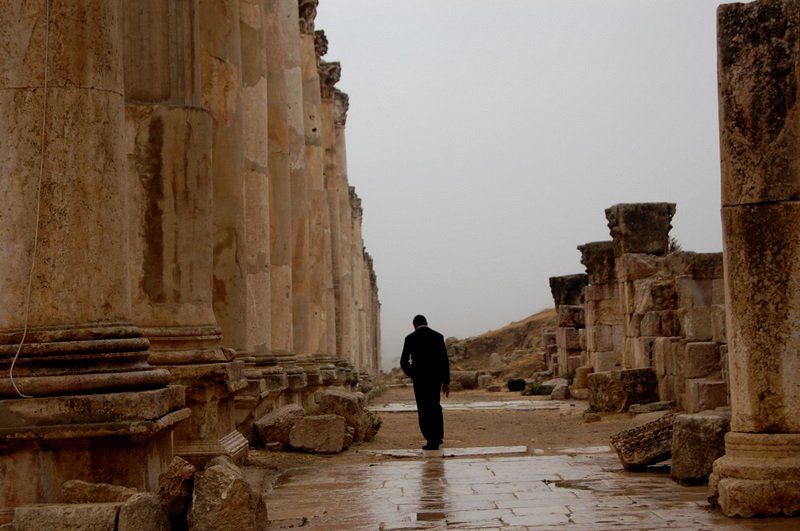 Power of authority organizes and propels itself through notions of identity and is therefore, to an extent, defined by the cohesion of a people’s collective identification. Simultaneously, identity is constructed according to the interests of power. Thus, the interaction between power and identity is nonlinear.

Whether it is the Romans prosecuting Christians and then becoming defenders of an empire said to be “rooted” in Christianity, or Turks spreading Islam in the Balkans after having adopted it in the Middle East, this ongoing relationship is evident. These empires consolidated and justified their power through identity manipulation, and each redefined its subjects as it expanded through time and space.

Power, to use Carl Schmitt’s definition, is the sovereign authority that decides on the state of emergency and what is to be considered lawful or unlawful (Schmitt, 12). This authority can manifest itself in the form of a nation-state, as is common in present times; however, it could also come in other organizational forms such as empires and caliphates. Authority and power then are synonymous in Schmitt’s account: “Everyone agrees that whenever antagonisms appear within a state, every party wants the general good…. But sovereignty (and thus the state itself) resides in deciding this controversy, that is, determining what constitutes public order and security, in determining when they are to be disturbed. And so on” (Schmitt, 9). But an authority’s decision is only the starting point to the power-identity relationship: The tools and methods used to implement that decision, the process of ruling itself, creates myriad unintended consequences. Any reconstitution of peoples through boundaries, institutions, social organization and other arrangements helps construct identities the sovereign might not have had in mind.

Collective identity refers to how a population identifies itself—whether in terms of nationality, religion, ethnicity or a combination thereof. One form of identification might be older than the other, another more cohesive and vocalized, but how they emerge or assert themselves depends on the circumstances, not chronological order. In many parts of the world, religion is a less influential form of identity than modern nationalism; however, if the context changes in its favor, religion can overtake nationalism as an influential force. In other instances, the two identities can converge and create something new, or they can both be subordinated by another force, such as ethnicity.

Etienne Balibar, a professor of moral and political philosophy at Université de Paris X, argues in Race, Nation, Class: Ambiguous Identities that past power structures and historical events appear to us to be “pre-national,” as if they were all playing part in the formation of what emerged as modern nation-state (Balibar, 88). For instance, Balibar asks, “where…are we to situate the origins of France? With our ancestors the Gauls? The Capetian monarchy? The revolution of 1789?” (Balibar, 86). The attempt to make them all part of an identical pattern, according to him, is an illusion (Balibar, 86).

As he notes, this is nothing but the nationalist mythical narrative, since the nation-state is more a result of “a series of conjunctural relations….” Further, he asserts that the closer we come to modernity the more these “conjunctural relations” are brought together by the nation-state (Balibar, 88). Thus the nation-state synthesizes other identities and subordinates them to its own in his view. But Anthony D. Smith, professor of nationalism and ethnicity at the London School of Economics, argues that nationality is not “the top of the evolutionary process” (Smith, 13).  Smith emphasizes the durability of ethnicity instead. His point is that the ethnie persists, and that “only in quite exceptional circumstances do outside pressures, in concert with internal alterations, engineer a radical breakdown of the quality of ethnicity…” (Smith, 16). While recognizing differences between ethnicity, nationality and other identity categorizations, both Balibar and Smith seem to support the idea and point made here that a group’s collective identity is not eternally static—even if some might be bound to persist more than others.

Since identity is not static, how does power influence its development? Benedict Anderson, highly renowned for his work on nationalism, argues in “Imagined Communities: Reflections on the Origin and Spread of Nationalism” that identity was largely constructed due to modes of colonial rule, namely three institutions of power: census, map and museum. Through the census, colonial powers quantified ethnicity (Anderson, 4). Through maps (Anderson, 6), this logic of total top-down classification continued with the drawing of borders. Colonial powers even created their own classifications of the past—“museums”— by (re)writing history according to their own interests and perspectives. For example, the label of Indonesia, Anderson argues in the book, came largely as a result of colonial rule. Before colonization, peoples of what is now called Indonesia had no feeling of a shared identity or a common past amongst themselves. Colonizers drew a map, quantified its population and re-created “commonness” based on their own reflections. As a consequence, those Southeast Asian peoples became one population, under one map and with one history, which enabled the actualization of an Indonesian nation and nationalism.

The interests of authority are arguably even more influential than the tools of statecraft referred to above. Authority wants to maintain and strengthen its power by expanding in time and space. Mahmood Mamdani, a prominent intellectual who studies colonialism and its consequences in Africa, elaborates on how colonial powers manipulated societies to achieve their own ends and changed the way societies function in the process. As he notes in “Decentralized Despotism,” many African tribes were dominated by elderly chiefs. However, their relationship with the tribe was characterized by communal codes setting shared and divided responsibilities (Mamdani, 42–43). The “full-blown village-based despot, shorn of rule-based restraint” only emerged as chiefs became agents of colonial interests (Mamdani, 46). With the modern “containerization” of peoples into nation-states, one can almost see a magnified and more complex picture of the same process: modes of identity in general reconstructed to preserve and increase an authority’s own power. Borders drawn by colonial powers throughout Africa, to a large extent, became lines that define the differences among the continent’s nationalities today.

European colonialism is but one example of how power constructs identity. Another is Turkey’s transition from the Ottoman Empire to a modern nation-state in the 1920s. Attempts by the Turkish regime under Kemal Mustafa Ataturk to remove religion from the state were part of the project to re-create Turkish identity, and for the regime to solidify its own power as protector of that identity. As nation-state scholar Srirupa Roy postulates that removing Arabic from namaz prayer, putting Muslim clerics under state payroll (read: control), changing the calendar from Hijri Muslim to Gregorian, making Sunday rather than Friday a day of rest, and adopting surnames as opposed to naming in accordance with Islam (Roy, 162–164) were all part of Ataturk’s strategy to emphasize nationality over religion.

This demonstrates to an extent how power constructs identity and solidifies its own position through it. Nevertheless, it does not explicate the second point of the argument: how power itself is defined by identity. In these very same examples one can witness this progression. Indonesia’s national identity, while largely constructed by colonial rule, became defined by a power structure that developed through anti-colonial struggle. Indonesians, while trying to free themselves from British colonialism, were at the same time involved in a nation-building project that organized society in its own way. This way required a re-assertion or institutionalization of collective identity. As Balibar notes, states are involved in a “delayed nationalization of society,” and this results in the subordination of individuals to the status of citizen “of the nation-state” (Balibar, 92).

So, while it is often easier to recognize authority’s role in constructing identity, one can also witness authority being redefined by the reaction to that role. The tools of statecraft used by the British utilized space, time, and the spiritual and material world to make Indonesian identity real. As a result, Indonesian nationalism has given shape and form to an indigenous power structure.

This leads to the third point. The relationship between power and identity is nonlinear, with power wanting to secure, maintain and expand on its position, and identity wanting to defend itself by gaining power. The two forces cooperate, fight and blur to the extent that telling them apart becomes nearly impossible. Nonetheless, each continues to possess a level of its own agency.

If representatives of a certain identity group grab power, or influence the state, they will often exaggerate identity politics based on their own biases and interests. The group in power would likely push out other identity groups or try to assimilate them, while promoting their preferred mode of identity, be it ethnic, religious or regional. The identity shifts foisted on the general population reverberate back to those in power. Thus, even the representatives of the group in power would be engaged in the reconstruction of their own identity through individualistic and small group considerations.

In essence, Balibar seems to be right when he says nation-states are products of colonialism all the way, “In a sense, every modern nation is a product of colonization: It has always been to some degree colonized or colonizing, and sometimes both at the same time” (Balibar, 89).

I would disagree that this is solely a characteristic of the modern nation. The interaction between power and collective identity is ongoing and prevalent in every form of social organization, not necessarily just modern nations. Authority power then, not only in the form of nation-state, can be viewed as a product of colonization, colonizing, and at times both simultaneously. Post-Ottoman Turkey is a colonizer in the eyes of its Southeastern self, inhabited by ethnic Kurds. At the same time, it is a product of internal colonization: Turkey was transformed from a more ethnically inclusive Ottoman-Islamic region into a state of nationalistic Turkification.

It is this interconnectedness that makes conflict a perpetual possibility, if not a necessity. Identity and power evolve dependent on their relation to each other. To an extent, this explains the diversity of conflicts, from the Balkan region where they take the color of ethnic violence, to those with religious and sectarian colors in the Middle East, or Communal in India and so on. Looked at from a larger picture, they are all the same process and of this same nature—only under different context. These dynamics between power and identity are important definers of whether social organization (in modern nation or any other form) will emerge as violent or peaceful.

Thus, power never seems to be living in a parallel world with identity. It is meaningful only through it. At the same time, power continuously reconstructs identity according to its interests. It picks and chooses identity traits it likes or it cannot ignore and imposes as well as defends them from others it identifies as alien or dangerous. Acknowledging that identity is not  static, and that tools, interpretations and interests are involved in its constant definition and re-definition, the outcomes are situational and contextual and do not necessarily follow a linear or chronological order.

Smith, Anthony.  “Are Nations Modern,” in The Ethnic Origins of Nations.  London. Blackwell. 1988

3 thoughts on “The Relationship Between Power and Identity”