Remembering to Not Forget: Art as Resistance in Rio 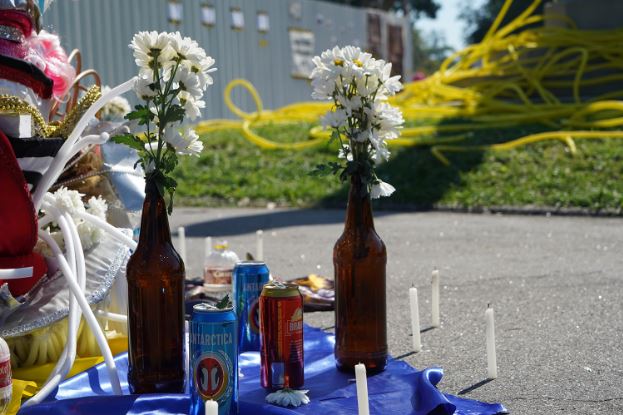 Thiago passes us a small ceramic cup filled with tea – a simple mixture of orange leaves and water. As we each take a sip, he tells us the recipe was passed down through his family from his great grandmother, to his mother, and now to him. Everyday at 5pm, Thiago drinks this same tea with his mother as an act of remembrance, a moment to pause, and a chance to reflect and hold family memories close. The smell and taste of the orange tea, he tells us, brings him closer to his great grandmother. The tea is a connecting thread from present to past.

Thiago Saraiva is one of the artists who recently took part in ÁREA INTERDITADA: LEMBRAR PARA NÃO ESQUECER, a public art pop-up exhibit held in commemoration of the 201st anniversary of the Museu Nacional, Brazil’s oldest history and science museum. As a part of his performance, Thiago invited people to sit with him on a small blanket for a cup of tea, next to a chalkboard that read “ESCUTO HISTÓRIAS SOBRE ESQUECIMENTO.” I listen to forgotten stories. Sitting directly in front of the entrance to the museum, Thiago listened as people came to share their stories over cups of his orange tea.

The Museu Nacional, which sits atop a hill in Quinta da Boa Vista park in Rio de Janeiro, is a site that represents significant loss and tragedy for many Brazilians. After a devastating September 2018 fire, much of the museum’s 20 million artifacts were destroyed, spanning 200 years of the country’s history, culture, and memory. Many have criticized government oversight and a lack of funding as a main cause of the fire. Despite years of struggling to obtain adequate resources and equipment, the museum simply did not have the proper infrastructure to handle the blaze.

Although the museum remains closed to the public, Thiago and a group of over 20 artists from Escola de Belas Artes gathered on Sunday June 23rd, installing sculptures, paintings, and performance pieces at the museum’s entrance. Through a range of interventions, the artists explored themes of reconstructing and preserving memories, bringing visible an element of resistance to the gated metal wall that surrounds the perimeter of the museum. Instead of solely focusing on the destruction of the fire, the artists gathered to acknowledge the power of collective memory and healing aspects of art in public spaces. In addition to Thiago’s performance piece, we saw interactive sculptural work like Sol Carioca’s ash installation on the ground, and paintings by Juliana Goncalves representing the many artifacts of rare bird species that were lost in the fire. Together, these pieces formed a subtle but powerful reply to the site of the museum – both in celebration of the museum’s anniversary, and an outcry at the continued neglect of the space.

Installation view of ÁREA INTERDITADA in front of gated entrance to Museu Nacional.

As we interviewed several of the artists during the exhibition, we noticed how seamlessly their work integrated with the surrounding park. Children ran through sculptures and admired the artists, many of whom were in attendance. The exhibition and its work quite literally called into question the concept of “out” and “in” within the museum context. We were confronted with art at our feet at nearly every turn, reminding us of the power of art as intervention, and the importance of preserving the collective memory of a space.

The newly formed art collective, led by curator Marcelo Franco, plans to engage in continued exhibitions and open calls throughout the next year to explore themes of resistance through art, with specific focus on bringing their work to public places. As the exhibition statement notes, “REMEMBERING NOT TO FORGET” is a critical gesture, a way for artists to stand together and against attempts to annihilate art and culture. Only what is not discussed is forgotten, so this is an opportunity to dialogue with society about the situation of the National Museum and, to a certain extent, of culture in Brazil. It is worth remembering that, according to the popular saying: “Whoever is not seen is not remembered”! This is an action that not only aims to make the NATIONAL MUSEUM “seen” and “remembered” but which, above all, is not forgotten.”

As we interviewed several of the artists, many of them expressed the need for continued funding for museums and public cultural institutions, and the hope for a free and open museum. In the span of an afternoon, these artists had in some way created their own museum of the future – one that was accessible, participatory, and engaging. Just as the fire was a tragic interruption to the critical functions of the museum, ÁREA INTERDITADA was a proactive response in the face of that loss, and an invitation to engage more fully with the memory of the museum and the importance of preserving the country’s rich cultural heritage and histories.