Getting to Know the Self-Help Group Approach 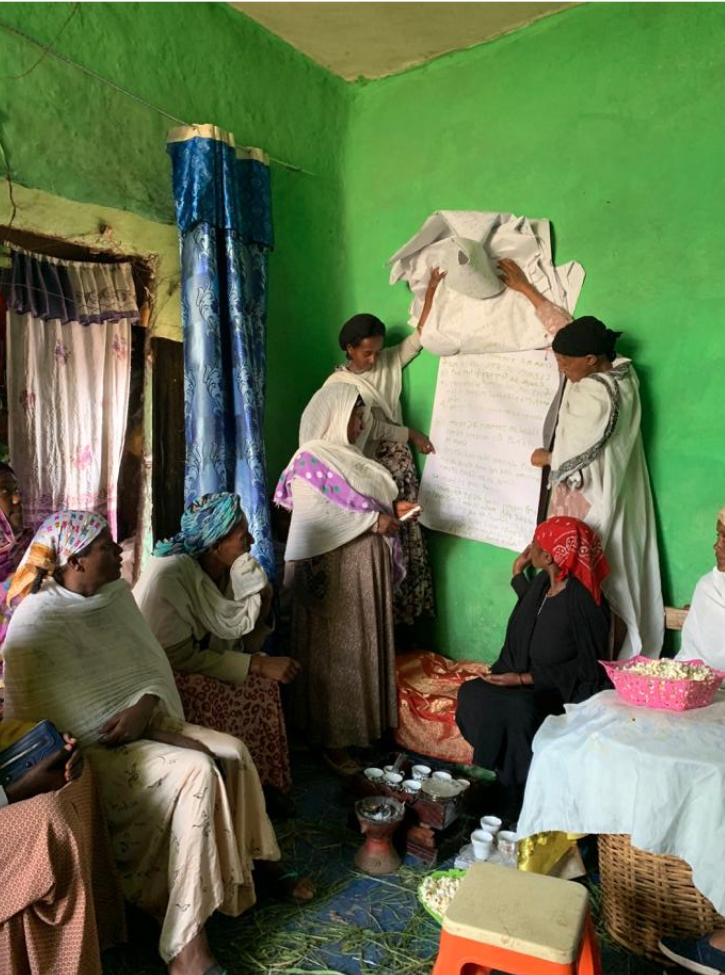 The last three weeks in Ethiopia have been quite a rollercoaster. The events of June 22nd have made world news coverage, as four people, including Ethiopia’s Chief of Military, were assassinated in an attempted coup. That same night the internet all across the country got shut down, which lasted a week.  We spent the day after the event cooped up in the house trying to collect bits and pieces of information about what happened and how much we should be worried. In just a couple days, the life in Addis went back to normal but the local news channels expanded little on the details of recent events. Our upcoming data collection trip up North had to be cancelled due to political unrest in the Amhara region, so instead we travelled down South. Now I get to write this post with a view of the beautiful lake Langano.

I am wrapping up data collection for the Monitoring and Evaluation project myself and my partner, Natalia, have been working on this summer for the Consortium of Women Self-Help Approach Promoters. CoSAP is an umbrella organization that works with other NGOs to advance the Self-Help Group approach among the women in Ethiopia. Partner NGOs in all parts of the country recruit women with the lowest socio-economic status to organize into Self-Help Groups. As a part of the group, members receive financial literacy and business skill training, start saving a fixed amount of money every week, and eventually are able to provide loans to each other, whether it is for buying materials to start a small injera-making business or to urgently access necessary medical care.

What CoSAP promotes (and what we actually witnessed during the data collection) is that being a member of an SHG can empower women and significantly improve their quality of life. What truly differentiates this work from other ‘female empowerment’ NGO projects is that it strictly forbids any ‘handouts’ – the NGOs only provide capacity-building and training support but do not give out any money. Instead, SHG members themselves save anywhere from 25 cents to 100 birr per week and then access this capital to take out loans. Thus, the interest rates they are paying (significantly lower than at a bank) helps grow their own capital, while the women are provided a safety net against financial shocks as well as an opportunity to invest in their own business.

This is my first time doing field work, so being able to go directly into the communities CoSAP works with, and listen to the women’s deeply personal stories has been an extremely humbling and rewarding experience.

One of the many women we have met who was able to start a business and significantly improve the quality of life for herself and her family after joining the SHG. Bougalech Mengistu has been a member of her group for eight years. She took out a big loan from her SHG to buy a weaving machine several years ago and developed a successful business of making and selling traditional Ethiopian scarves. Soon her and her husband will be moving into a much bigger brand-new house that they just built.

A SHG in Adaamaa (a small city south of Addis) where the women created a beautiful uniform for their group to signify the love they have for each other. Although a traditional Christian Orthodox dress has a cross on the bottom, the women ordered a palm tree embroidered for the Muslim members of the group. Many women shared that one of the most valuable elements of their SHG experience has been gaining sisterhood and the confidence to speak out for themselves.

Bagu Sira (Good Job) Cluster Level Association (CLA) group in Addis Abeba. A CLA is a network of 8-10 SHG groups (each SHG chooses 2-3 representatives to the CLA), that is formed to eventually substitute the support that an NGO provides to the SHG. This summer we have been conducting focus groups with CLAs to try to evaluate how successful they are at forming new SHGs, strengthening existing ones, and their involvement in community-wide issues without the support of an NGO.

One of the most impressive CLAs we have visited was a group in Fiichee called Ethiopia Igziabir Yebarg (God Bless Ethiopia). Not only were the women extremely generous in their reception, they also prepared an entire presentation on the extensive work they have done as members of the SHG and for their community. The women marched to the court together after a man accused of rape of a nine-year-old girl got only a six-year prison term. Their action pushed the court to increase the sentence up to 16 years.

Several SHG women, as well as NGO representatives, shared with us that one of the biggest challenges of recruiting more women in poor communities to form and maintain a Self-Help Group is the lack of immediate material benefits that many other NGOs, especially in Addis might offer. Being a part of an SHG requires time, commitment, and accountability from all members, as the group takes time to grow, develop, and be consistently maintained in order to be able to benefit its members.

Although there are clear economic and psycho-social benefits of being a part of an SHG, demonstrating the value of such long-term results over short-term benefits seems to be one of the main challenges of promoting the self-help approach.