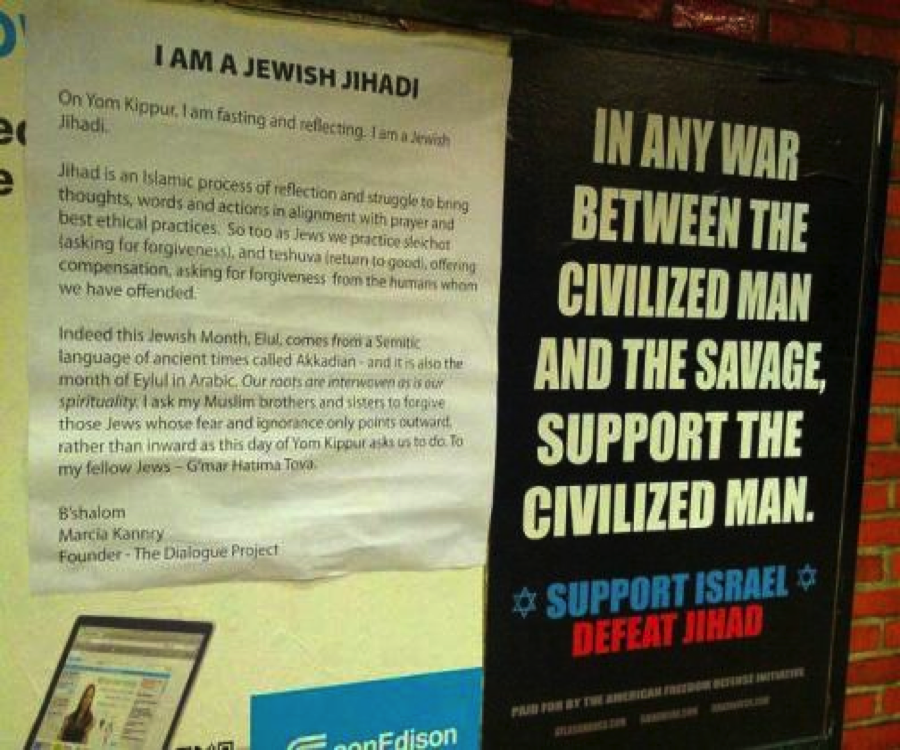 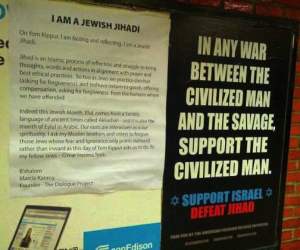 On September 25, a former Zionist Professional of the Year fasted and reflected, as Judaism prescribes for the observant on Yom Kippur. She was in good company, as on other holidays—men sporting black head coverings roamed the blustery streets of Brooklyn asking passersby if they were Jewish, and offering blessings.

Later that evening, after visiting her local printing service, Marcia Kannry traveled to the 49th Street subway station, went underground, and posted a large white piece of paper, covering a Con Edison ad. She expected arrest, maybe some backlash. She did not expect her message to go viral as a tweet posted by the editor of a major Wall Street Journal blog or to become a hot topic from Turkey to Iran. Her organization, The Dialogue Project, received a number of “unsubscribe” emails, as might be expected: On the poster, she had introduced her as a “Jewish Jihadi.”

Pamela Geller, a high-profile leader of the Stop Islamization movement, was having a different kind of Tuesday evening. She was no doubt celebrating her victory over the Metropolitan Transit Authority (MTA), who had initially refused to run the so-called American Freedom Defense Initiative’s anti-Muslim subway ad, citing “demeaning language.” A judge sided with the Defense Initiative and rejected the MTA’s refusal as a first-amendment violation. Up the ads went, and New Yorkers of all stripes saw the words, spelled out in red, white and blue lettering: “In a war between the civilized man and the savage, support the civilized man. Support Israel. Defeat Jihad.”

It was directly next to one of these ads where Ms. Kannry posted her own message. She asked forgiveness, as Yom Kippur asks Jews to do. She voiced her interpretation of jihad, one that would be scarcely recognizable to the average Fox News viewer: “Jihad,” she wrote, “is an Islamic process of reflection and struggle to bring thoughts, words and actions in alignment with payer and best ethical practices.” She asked her Muslim “brothers and sisters” to forgive. She recognized the deep connections between Jews and Muslims: “Our roots are interwoven as is our spirituality.” Finally, she wished her fellow Jews Hag Sameach, “Joyous Festival.” She signed the note B’Shalom, which means “in peace.”

It is no accident that the poster reflects an understanding of religious theology as well as a wish for peace. Ms. Kannry is the founder of The Dialogue Project, a grassroots Brooklyn nonprofit that facilitates monthly dialogue between Israelis, Palestinians, Jews, Muslims, Christians, and others with ties to the conflicts in the Middle East. Hers is a path of “conflict transformation,” where dialoguers operate within guidelines that encourage nonviolent interaction. Rather than stressing agreement, participants are taught to address the “elephants in the room” and learn to communicate while examining their own deeply held beliefs and prejudices. For many, it is their first time face-to-face with “the Other.”

In the days following the first ads, Ms. Kannry changed her poster to reflect the end of Yom Kippur and the end of her personal fast and atonement. The responses poured in, both to the Wall Street Journal editor’s Twitter and to The Dialogue Project. Some were a simple “Thank you.” Others more nuanced: “Quite a triumph! Using the platform of hate to promote critical thinking and understanding.” One detractor was miffed that a Con Edison poster was “defaced.” Many expressed wonder that a Jew would care about hatred against Muslims, much less take the time to post such a provocative message in the subway: “It is beautiful to see that there are mainstream voices against hatred, division and Islamophobia within the Jewish community.”

Jihad is a word that carries ugly connotations for those unversed in Muslim spiritual practice. And the influx of judgment, anger and close-mindedness we find in our increasingly polarized society makes Ms. Kannry’s message of understanding and forgiveness so salient, so relevant. Thanks to acts like hers, and to social media as well, dissent to hate will not go unnoticed.