Racial Discrimination in America on the UN’s Radar 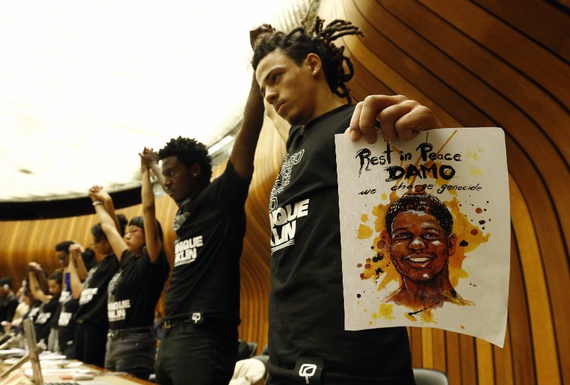 It was established this year that the United Nations would observe the International Decade for People of African Descent, commencing on January 1, 2015 and continuing through December 31, 2024, with the theme “People of African descent: Recognition, Justice, and Development.” While Brazil has the largest population of people of African descent outside of Africa, discrimination against those of African descent  worldwide persists. Many who are included in the African diaspora experience limited access to quality education, employment, housing, healthcare, fair justice systems, and safe living environments. Descendants of the African continent in the United States have historically felt the impact of racial discrimination stemming back to the atrocities of the transatlantic slave trade, and continue to fight against the present form of institutional racism that has established and fosters the symptoms that plague Black American communities across the nation.

The UN, as it turns out, was presented with the opportunity this year to investigate many of the discriminatory practices that continue to take place against African Americans within the U.S. On August 12th, Ron Davis and Sybrina Fulton, the parents of two unarmed black male teenagers who were shot to death by adult white men in Florida, testified as part of a U.S. delegation championing a United Nations review of U.S. compliance with the International Convention on the Elimination of All Forms of Racial Discrimination (CERD), which was ratified by the United States in 1994. Davis, father of Jordan Davis, and Fulton, mother of Trayvon Martin, attended the hearing at the United Nations offices in Geneva, which took place just three days after the killing of unarmed teenager Michael Brown in Ferguson, Missouri by a local white police officer. The testimony of Davis and Fulton in the wake of the Ferguson and Staten Island, NY killings by law enforcement, “made the discrimination present” and underscored the importance of the work being done in Geneva at the U.N.’s review of the United States’ record of racial discrimination, according to reports of the delegation. While both parents expressed “frustration and bewilderment over the failure of their sons’ assailants and much of society to recognize the value of their sons’ lives,” other members of the delegation raised concerns over high levels of gun violence and its impact on communities of color. The excessive use of force by law enforcement agents in the U.S. against racial minorities and racial disparities in the criminal justice system and in education were also discussed during the August review.

Three months later, in a November review, The U.N. Committee Against Torture in Geneva, a 10-member watchdog committee, condemned police brutality and excessive use of force in the United States, particularly against minority groups and people of color. Dr. Jens Modvig, Director and Chief Medical Officer at Dignity, the Danish Institute Against Torture was one of the committee’s two rapporteurs (appointed to report on the proceedings of its meetings) for the most recent report on torture in the United States. Modvig states, “We have reports of widespread excessive use of force by the police. This gives rights to concern, of course. Some vulnerable groups including ethnic groups, blacks, have been particularly targeted. For this reason the committee feels that there is a need for investigation and prosecution of all cases of police brutality.” Other committee members expressed deep concern at the frequent and recurrent fatal police shootings of unarmed black individuals, and though a delegation of 27 officials from the U.S. attended the review meeting to answer questions posed by the committee, the data they provided was insufficient in quantifying the reported incidents or how they were being investigated and prosecuted.

During the presentation of the United States’ record on Human Rights to the U.N. Committee Against Torture, a group of youth activists from Chicago, who had traveled to Geneva in order to express their grievances against the American government’s handling of racial discrimination, rose to their feet with their hands in the air to stage a silent protest. A member of the group We Charge Genocide, Malcolm London, spoke to international news reporters following the demonstration:

“Every day in the states, in the city of Chicago, We Charge Genocide has a report that documents every single day that police violate rights, abuse, sexually assault, murder, and kill, particularly people who look like me, who are black and who are brown. And that is devastating. And what the state brought today does not at all cover and/or answer those questions and it’s inadequate. And while we’re dying in the streets, the State department is patting themselves on the back because they let us stand in a room? We’re not fighting for the right to stand in this room, we’re fighting for the right to be alive.”

In a recent interview with Democracy Now, Dr. Modvig announced that the U.N. Committee Against Torture urges complete statistics about alleged excessive use of force by law enforcement in the United States and the reactions in terms of investigations and prosecutions, and punishments. The committee also recommends, “that each case of alleged excessive use or force, each complaint over police officers, needs to be fully investigated by an independent body, and in case there is a basis for prosecution, then the prosecution should be done. And if found guilty, the policy officer should be punished accordingly. Further, the victims who have been subjected to excessive use or force should be able to receive remedy for this.”

Americans Are Springing into Action

Today, thousands of Americans of all ethnic backgrounds, age, and class, have taken to the streets of America in ongoing protest against racial discrimination and the system that appears to protect police officers who use excessive force better than it protects many of its citizens. With the recent announcements that neither officers involved in the fatal shooting of unarmed Michael Brown of Ferguson and the choking of Eric Garner of Staten Island would be criminally charged to stand trial. Citizens who have been victimized, as well as those who empathize with the victims, have launched into an American spring of activism, resorting to historic tactics of protest and finding new ways to fight back. Fifty years ago, black people in America participated in protests and civil disobedience in the name of obtaining civil rights. Today, Americans are doing the same in the name of obtaining not only civil rights, but achieving the acceptance of human rights for blacks, other citizens of color, and ALL people nationwide. The goal is not only to receive true justice and accountability for discriminatory practices, especially by police and law enforcement officials, but also to rewire society to genuinely value the lives of African Americans, especially those in marginalized communities. Now that we are well into the second decade of the twenty-first century, how do you train a police officer in America to make the personal decision, within a split second, NOT to shoot and kill an unarmed black person (especially when that same officer would never aim his gun towards, let alone shoot and kill, an unarmed white person)?

Now that we know that the International Decade for People of African Descent has been established by the United Nations with the theme “People of African descent: Recognition, Justice and Development,” let each American match the concern and effort that is being projected by the international committee with a deeper commitment to strategy for change. Let us commit to making the decade of January 1, 2015 through December 31, 2024 a productive ten years by implementing more targeted policies of social, civic, and economic development in the U.S. for people of color. As the Resolution that was adopted by the General Assembly on December 23, 2013 concludes, Americans of African descent, as well as the diaspora worldwide, will look forward to “the allocation of predictable funding from the regular budget and extra-budgetary resources of the United Nations for the effective implementation of the programme of action and activities under the International Decade.”

Mai Perkins is completing her MA in International Affairs with a concentration in Media & Culture. Follow her on Twitter @flyMai.