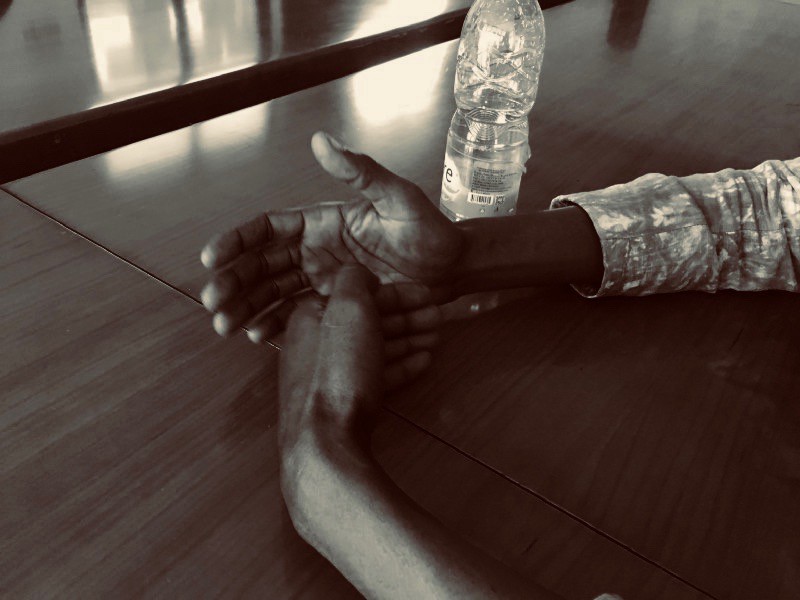 Note: This piece contains a first-person account of human trafficking and sexual violence.

This is an interview of Abraham David, one of several I conducted during my travels in the Amhara region to complete my research on Ethiopia’s international labor migration. Each interview focuses on the dominant issues affecting the trend of unemployed Ethiopians who migrate to seek diverse job opportunities. More so, each conversation depicts the experiences of a migrant returnee who carries the traumas identified with unregulated migration. Besides finding it difficult to reintegrate into society, returnees, usually from rural areas, require psychosocial support, basic skills training and economic assistance to guide them towards self sufficiency.

While a large percentage of migrants from Ethiopia travel to the Gulf countries, others prefer to journey through Sudan and Libya with the hopes of reaching Europe. The dynamics of human traffickers and smugglers with their complex transnational networks, who assist many migrants through their journeys, presents a strong challenge to the Ethiopian government and a grave danger for the migrants themselves. By recounting Abraham’s experiences, this interview provides a real life example of human suffering not readily apparent in the statistics generated by international organizations.

The emphasis on the role of traffickers and smugglers as major actors in the process of labor migration opens channels to advocate for improved measures and solutions to curb illicit activity. Migration, when responsibly conducted has the genuine potential to enhance development, by re-energizing local systems of both sending and receiving countries.

Note: I have tried as much as possible, between translations and hours of conversations to remain as close to each person’s narrative.

“I went to Sudan first, with a tourist visa which I received from the Sudanese embassy in Addis Ababa. This was in 2015. Then onwards, I’d already made up my mind to cross the desert on foot to the Libyan coastline. By crossing the Mediterranean from Libya, I was hoping to reach Europe, then migrate to Canada. Once there, I was looking forward to meeting my father for the first time. He had left my mother and I after my birth, after which we hadn’t had any contact with each other until a few years ago when he reached out to us. We began by communicating over the phone, conversations through which we’d express our desire to reconcile with each other. That’s why I wanted to travel to Canada, to meet my father for the first time and live with him. He’d also mentioned the prospects of helping me find a job in that country, and that was very exciting as I’ve been unemployed for a while.”

“Frankly, reuniting with him by crossing the Sahara on foot with a group of people, doing odd jobs under the thumb of cruel human traffickers didn’t seem all that daunting.”

Could you please describe your journey?

“Our journey through the desert was long and arduous, full of pain and death. The smugglers were cruel and ruthless. They would attack us or kill us with knives if any one of us were thought to have stepped out of line. Death was everywhere, around us, near us, it walked with us. Death was a part of the journey. The dead bodies would be fed to the sand in the vast desert from where they’d eventually disappear, to be forgotten forever. Towards the final leg of our journey on the African continent, those of us who didn’t have enough money to cover for the next part of the journey which was getting on a boat from the Libyan coast for Europe, were taken to a rest stop some ten miles away from the Libyan border. Here in the middle of nowhere there’s a small encampment controlled by a smuggling network and this was the place where I lived for a year and a half under extreme circumstances. My father and a friend had initially financed a large part of my journey to Libya. In total they’d sent Birr 80,000 ($2850), to cover my expenses throughout the journey, but the smugglers would keep bullying us for more money, until I couldn’t provide any more.”

During our conversation, Abraham would lapse several times into Amharic while I’d wait patiently for Kum-Nagar, the project manager of the shelter, to translate his words into English. “My father eventually stopped sending money and our relationship went downhill from there. During my imprisonment in the smuggler’s encampment due to non-payment, I was unable to provide any more money towards my final destination. I was beaten, tortured and kept as a sexual slave. Yes, there were many times when I wanted to commit suicide. During my imprisonment my captors would also use me as a translator and a messenger for other Ethiopian migrants who would regularly get caught in their web of deceit and demands for more money. I tried to make amends with the migrants by giving them insights into the smuggler’s modus operandi and by secretly asking them not to provide any financial details to the smugglers as they would try to extort all their cash from them and their families back home. Of course I was found out and punished. They punished me first by stopping the food and then beating me. Then one day mercifully they released me. I fled back to Sudan where I found a community of Ethiopians who helped me, supported me financially and sent me back home to Ethiopia.”

“The Libyan route is the most difficult route, its even more difficult than the one to the Gulf countries through Djibouti or Somalia, crossing the Red Sea or the Gulf of Aden to Yemen. The dry desert climate, lack of water or food, and the journey itself takes weeks or months depending on the migrant’s flow of cash.”

Abraham David is 29 years old. He is originally from Debra Tabor, a small town in the Amhara region of Ethiopia. He has a 12th grade education, lives with friends on the outskirts of Addis Ababa and is currently seeking steady employment.

Priya Singh Nelson is an MA Candidate in International Affairs at The New School University, New York. This interview is part of an independent project supported by academic research and scholarship, conducted through three fact finding missions; to Ethiopia, Kenya and Sudan from May-August 2018. The study was supervised by the International Field Program of the New School University and GSA, an organization dedicated to providing psychosocial care and support to trafficked victims, located in Addis Ababa, Ethiopia. To read more about her research on Ethiopian Labor Migration, please see her article published in The Völkerrechtsblog. You an also connect with her on Twitter.