Where the Sea Reflects the Sky 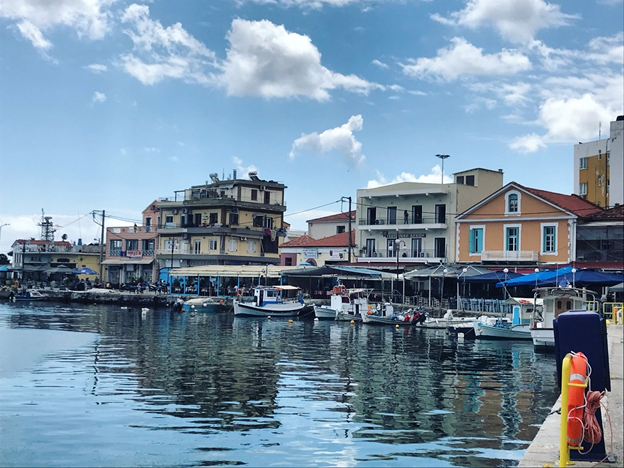 [Photo taken at the city center of Mitilini by Daniela Porcelli]

As I sit in a beautiful Turkish home from the 1800s, I wonder how to begin this story, one that has yet to really begin. Six New School students and I arrived on Lesvos this week, eager and overwhelmed about our upcoming projects. We have a diverse group of interests from security, sexual and gender-based violence, LGBTQ+ rights, unaccompanied minors, mental health, smuggling, and the environment all relating to migration.

Since arriving we’ve been greeted by beautiful weather and gracious hosts. My Airbnb hosts gave us home-made olive oil (which tastes unlike any other I have ever had), fresh tomatoes, cucumbers and melons. The food has been a dream.

Prior to arriving on Lesvos, we were all in Athens where we took an overnight ferry from Piraeus port. We’ve heard many things about Lesvos from Athenians, about its beauty and delicious food, especially the fish. In a cab from the Athens airport when I first arrived, the driver had one thing to say about the island: “When you get to Lesvos, go swimming. But, swim toward the ocean. The color of the sea is the same color of the sky. The same blue.” Its beauty and the color of the ocean were not exaggerated.

Mitilini feels like both a busy island with people constantly flowing in and out of its port and a small community. The street by our house is bustling 24/7 with cars and motorbikes zipping by and campaign vans broadcasting their views by megaphone. Structures are both older and new and often juxtapose each other. While walking down a street with trendy shops and bars, only a few feet away are ancient landmarks like the Yeni Mosque which was built in the early 1800s. Homes and shops are made of colorful stucco in pinks, blues, and greens, with orange shingled roofs. Balconies and yards overflow with flowers and fruit trees. Oversized stray dogs and cats trot throughout streets and shops greeting their human neighbors. This city’s character is a colorful contradiction to New York City.

Just a few hours after arriving on the island, we met with one of our contacts. Metin, a humanitarian worker specializing in unaccompanied minors, welcomed us over Greek coffee in the middle of the city center of Mitilini. He shared some information about the town and listened to our research topics. The following two days we met with our second contact, Emmanuel, a lawyer on the island. We listened to him recount refugee stories and cases that were both accepted and denied. Within Emmanuel’s legal NGO, he has two professional partners that are extremely important to his firm. They are two women, his wife Khatiuca, a paralegal, and Eleni, his legal associate. As two influential women, I look forward to learning more about them and their role in aiding refugees in the coming weeks.

After months of reading assessments, I am constantly looking to see what has changed over the years since migration to Lesvos was front page news. From the difference in Piraeus port, once full of tents for refugees, to the increasing blame on smugglers by the E.U., and messages of solidarity tagged on buildings in the form of graffiti.

Despite the less intensive coverage of the continued migration of refugees, locals did not mention them when we were in Athens. The urgency of the issue has dissipated on some fronts despite the present, and growing, number of refugees and the unchanged conditions in which they are living. But, Lesvos has a history of refugees, and it is repeating.

Metin closed our meeting with a reminder that the Greeks on Lesvos were once refugees. Emmanuel commented his grandparents were refugees. Many Greeks who call Lesvos their home are descendants from similar circumstances. This island is no stranger to people fleeing for their safety, looking for relief, a safe place to call home and live again. There is a statue on the island called “Statue of the Asia Minor Mother” commemorating Greeks who were forced to flee Asia Minor as the Turks invaded in the early 1900s. They fled to Lesvos and there they stayed. The statue is of a woman cradling a baby while two young children stay close to her, one clutching at her legs. She stands tall and strong, looking to her future on a strange island. This is an image I have already seen as I walk the streets of the city, refugee mothers holding their sleeping children as they travel through town, resting on a bench in a park, and breastfeeding by the sea. As the weeks continue and we learn and observe about these new refugee lives, I am certain stories will echo the past. The Asia Minor Mother is here in the camps. How long she remains there, in detention, is unknown.

3 thoughts on “Where the Sea Reflects the Sky”