A Warm Welcome from the Vusi Community 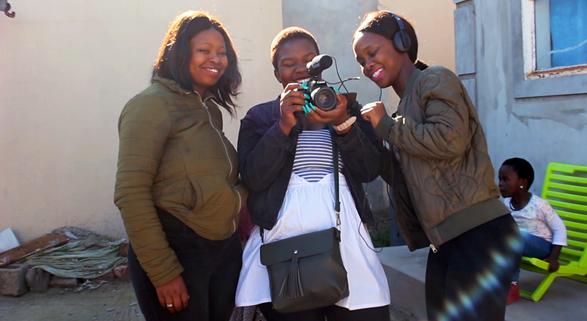 [Three youth members of Know Your City TV shoot an interview in our first meeting with the Vusi Nsutsha community.]

…Or better yet, wamkelekile! Wamkelekile means welcome in the Xhosa language, which is one of the eleven official languages spoken in South Africa (and one of the thirty-five languages indigenous to the Republic).

The first phrase I learned to say in Xhosa is “Igama lam ngu Ana”, which means “My name is Ana”. I was taught by Sabelo, one of the youth members from Know Your City (KYC) TV, which seeks to empower youth living in informal settlements of the city to document their day to day life, and tell their stories through media. KYC seeks to ask viewers “do you know your city?”, and is an initiative started by Slum Dweller’s International, the organization we are going to be working for. KYC ensures that youth are at the forefront of creating dialogue about their own city’s future.

After a warm welcome through a lively, communal song, the Vusi community had officially opened its doors to us. Even though we couldn’t understand the language, the claps, chants, cheesing expressions, and rhythmic body movements let us know that we were now welcome to share a space with the Vusi people. Joe, a recent graduate of the New School’s Bachelor Program for Adults, and one of the seven students on the IFP South Africa team, recalls: “I didn’t know that was them greeting us…They told us that until this happens know that you’re not welcome in a meeting.”

Slum Dweller’s International is built on the foundation that the very residents of informal settlements, such as the Vusi community, don’t need others to collect information about their settlements. The residents themselves are the data collectors, analysts, investigators, activists, organizers… This data is later used to negotiate with Cape Town’s city government to receive subsidies and funding that supports projects proposed by the community. Data collection not only empowers residents to record and showcase their communal lived experience in their settlements, but has increased the voices of the urban poor demanding community improvement.

The Vusi community has been historically split, but is now coming together as a united front to negotiate a land sharing deal with the Western Cape. The challenge is to bring a new-found hope to the older generation, which has lost faith and motivation after more than twenty years of waiting for various promised project developments to occur. Simultaneously, there is now a younger generation that does not feel the same fervent commitment to the community’s historic fight. That is where Know Your City TV seeks to insert itself. The youth alliance is now documenting the vibrant community meetings and is learning to collaborate with the elders in the community. Together, the youth and the elderly are now part of a new united front; the youth are able to quickly master the use of film equipment to document the community’s progression, while the elderly are able to pass down data recording practices.

A key component of the meeting consisted of organizing the community’s savings scheme. The Federation of the Urban Poor is yet another initiative by Slum Dweller’s International, which has empowered thousands of slum dwellers to start savings schemes. It’s essential to highlight that FEDUP has been predominantly a women-led movement, which has given rise to more women leaders in the community and challenged previously male-led leadership roles. What might in appearance simply be a system by which money is collected in a community, has becoming a collective space for open discussion and a powerful organizing tool.

The meeting culminated in a shared meal, followed by a final goodbye (or rather ‘see you later’) given by a few New School students, where we were overjoyed for having been welcomed into the community’s meeting. Together, we were in awe of how participatory data collection was in action, and felt immensely thankful for having been witnesses to the progress of the Vusi community in achieving the land sharing deal with the city government. In the next seven weeks, we hope to continue working alongside the Vusi community to fight for the change that these residents are proactively organizing towards.