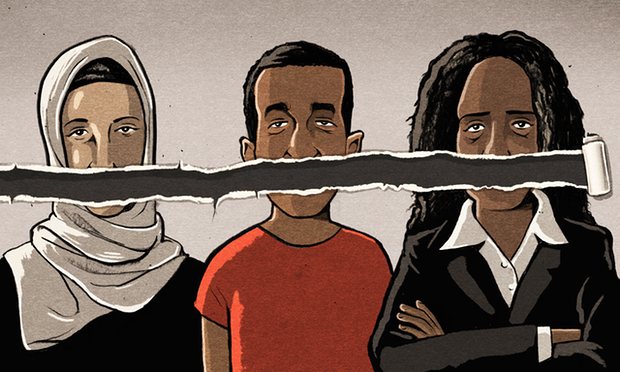 I was in a class this week when my professor used the word “blacks”. It is an informal class at a liberal college and she is a left-leaning, informed teacher who is usually pretty cool. So I didn’t think it was a big deal when I interrupted her.

It felt a little bit like a comedy sketch at that point and we were playing the roles of the well-meaning white liberal and the blacksplainer. I hadn’t meant it to be that. I had simply meant for her to add “people” the end of her sentence, and continue with the class.

What happened next was an organic class discussion on the power structures of language which, perhaps sensing the moment, she graciously made space for. A recent Vox piece on Donald Trump’s repeated use of the phrase “the blacks” got a lot of play, as did the embarrassing exposure of [Toronto newspaper] The Star’s newsroom as a white space through Peter Howel’s “coat-switching” error.

Somewhere in there, I mentioned that while I recognized the context in which this discussion was being had (in the United States on the eve of a Presidential election polluted with vitriolic –isms of all kinds), but that I am African, and “blacks” speaks to colonialism and it’s legacy to me in a way that may not be so apparent or fresh to Americans.

I mentioned the phrase “off the reservation” as another one of those commonly used coded and racist sayings thrown around in ignorance. And then something astonishing happened.

A classmate, who can only be described as a quintessentially white-feminist liberal (and I say that with no malice or double meaning, but only to set the scene) – likely a self-described ally of minorities – said something that I have not been able to forget. She wasn’t aware that “off the reservation” held racist connotations and didn’t understand what they were. “If anything, it’s offensive to white people,” she reasoned, in defense of an argument she had admitted she knew nothing about. But that wasn’t what was so shocking.

“It’s racist,” I told her, “because Native Americans tell us it’s racist.”

“I don’t understand how it’s racist, though?”

“You know something is racist when the people who are affected tell you it’s racist.” I thought that statement was uncontroversial and self-evident. The oppressed know more about the structures that oppress them than the privileged, even the allies. “Do you need to understand why something is offensive to stop doing it, if people tell you it’s offensive?”

I honestly expected her to say no.

“Yes,” she replied. “They might not be representative of everyone in that minority group.”

I was stunned silent.

Of all the people to say something like that, to exercise and defend such privilege, I could never have predicted it would be her. Perhaps this is not what she meant, but what I heard was “I’ll retain my right to engage in epistemic violence against you until I decide that it’s wrong – your opinion is irrelevant.”

The conversation continued, but I wasn’t listening. I was still reeling.

In the end, I checked my emails to distract myself from my escalating anger and she had sent one line to the class: “Yes, I was wrong, (“off the reservation”) is offensive,” she wrote, attaching a link on the origins of the phrase (written by a white woman who had interviewed Native Americans).

What a hollow victory.

I stumbled across Toni Morrison’s 1993 Nobel Lecture today, in which she explores epistemic violence in the most beautifully multidimensional way that only she can.

The systematic looting of language can be recognized by the tendency of its users to forgo its nuanced, complex, mid-wifery properties for menace and subjugation. Oppressive language does more than represent violence; it is violence; does more than represent the limits of knowledge; it limits knowledge. Whether it is obscuring state language or the faux-language of mindless media; whether it is the proud but calcified language of the academy or the commodity driven language of science; whether it is the malign language of law-without-ethics, or language designed for the estrangement of minorities, hiding its racist plunder in its literary cheek – it must be rejected, altered and exposed. It is the language that drinks blood, laps vulnerabilities, tucks its fascist boots under crinolines of respectability and patriotism as it moves relentlessly toward the bottom line and the bottomed-out mind. Sexist language, racist language, theistic language – all are typical of the policing languages of mastery, and cannot, do not permit new knowledge or encourage the mutual exchange of ideas.

Perhaps, I should have led the discussion with the eloquence of Ms Morrison. In any event, I ended it with her. I sent the lecture to the class an hour ago.