A Night With the Street Sleepers of Kowloon 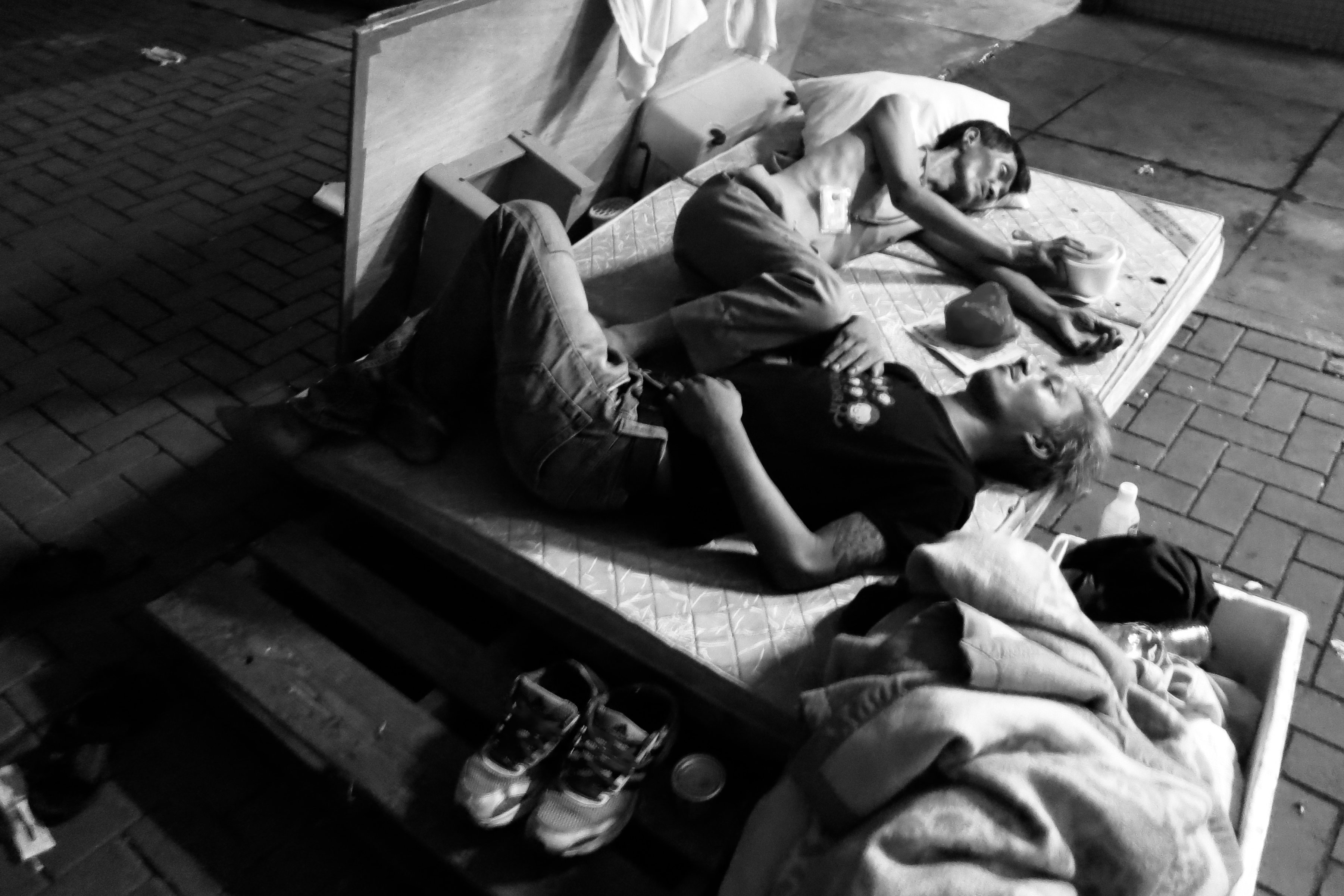 At 10 p.m. it began. Crock pots were plugged in, sausages wrapped in bread rolls divvied into individual plastic bags. I examined the soup ingredients as I opened the cans of China’s version of Campbell’s soup; Ham, ginseng, red dates, and tiny abalones. This was Thursday, the weeknight the social workers went into the streets of Kowloon’s former slum to feed the homeless, or the street sleepers as they call them.

I joined them to better understand the housing crisis that affects hundred of thousands of residents in Hong Kong, natives and migrants alike. In daylight, the social workers can be found at the Society for Community Organization (SOCO), which advocates for those affected by the housing crisis. Whether homeless, or paying low rent to live in cage and cubicle homes here in Hong Kong, anyone who isn’t safe or is in need can be served by SOCO. Workers here march in protest of unfair housing laws and holding meetings to decide how to approach upcoming evictions and public housing wait lists.

As we started our journey into the night, we f first stopped was at what looked like a makeshift junkyard on the corner of a major intersection in Kowloon.  Walls made of baby carriages, broken chairs, plywood, and molded suitcase created a make-shift fortress.  Shy heads popped out from under a pile of old clothes, and around corners of barren refrigerators. They conversed with the social workers in Cantonese. Yes, their health was okay, no they hadn’t filled out the last form for public housing yet. Thank you for the soup. Then they retreated into the small spaces from which they appeared.

The vast majority of the people we visited were male. Few were young, most looked over sixty, though surely due to their health, appearance was a poor method of judgment. They congregated in alleys, lined subway walkways, park benches, under awnings of buildings. They seemed to be on every street we turned down. Yet, public perception is that Hong Kong doesn’t have a homeless problem. News articles on the subject are scarce. If asked about the homeless, the average Hong Kong businessperson would likely refer you to the posh boutique that has a storefront in the Causeway Bay neighborhood.

Maybe a symptom of a close-lipped culture, homelessness is not an apparent aspect of society. You rarely see people asking for money, or huddled in doorways during the day. This is because of a strict law dictating where and when homeless can sleep. In most parks and streets, street sleepers were to bed down at 11 pm and rise and clear out by 6 am, no trace left behind. So at night, their communities unify, sometimes playing checkers and smoking cigarettes before letting sleep claim their consciousness.

As we turned down one alley, lit by the florescent lights of nearby stores, I noticed that with every subject I shot, bones protrusion seemed more apparent  and faces seemed more gaunt. I asked a social worker why the men on this street seemed so emaciated and he pointed to a syringe next to the mattress near my feet. “They’re all drug users. The older men prefer opium. Many of these men are Vietnamese. Refugees from the Vietnam war.” He went on to explain that when they came here they were immediately isolated from mainstream society, the language barriers making it difficult to assimilate. Lonely, out of work, and far from home, they found solace in illicit activities.
When  I asked if things were getting better for the homeless, the answers were neither hopeful nor cynical, but matter of fact. “Things change, but public housing wait lists are longer than the years most of these men have left,” one social worker calmly replied. “All we can do is show we care, and we hope to make Thursday nights better than the others.”