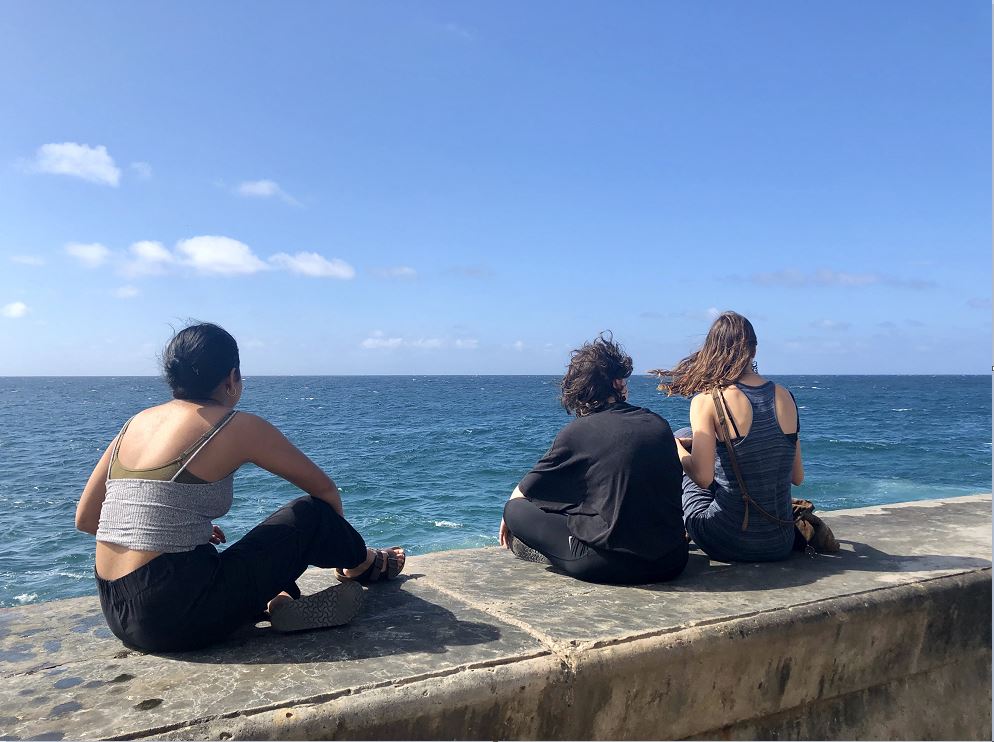 [Relaxing on the Malecón.]

On May 26th, 2019, our group of twelve arrived at the Jose Martí International Airport in Havana, fleeing New York City on what was by far the warmest day of spring. While we waited for the bus to the casas particulares, our pale-from-winter skin baked in the Caribbean sun–under the kind of sizzle that makes thighs stick to subway seats, a sizzle that spells “home” to a girl from the tropics. The intense heat was the first thing about Cuba that reminded me of the Philippines. The second, of course, was the humidity.

In the next two weeks, I would discover that beyond similar climates producing shady palm trees and juicy mangoes in both archipelagoes, the Philippines and Cuba shared a past that shaped our physical, political, and social landscapes. Centuries enduring and rebelling against Spanish colonization forged Havana and Manila into ‘sister cities,’ historical siblings marked by the same struggle for self-identity and freedom. Even our national heroes who led the independence against Spain were named Jose: Jose Rizal for the Philippines and Jose Martí for Cuba; two intellectuals, patriots, and martyrs who wrote extensively on liberty for their peoples. Martí can be found all over Cuba: beyond lending his name to the airport and his face to the peso, a bust of Martí graces the entrance of every public building. Rizal, on the other hand, has a province named in his honor.

I lived in Rizal until I was 12, before I left the Philippines entirely and before my pre-teen mind could grasp the intricacies of our colonial history. Now at 25, I roam the streets of La Habana with a Spanish last name that, regardless of how different from Habaneros I may look, I realize somehow ties me to this city’s people. As I learn more about Cuba, I feel like I am gaining better understanding of my own country’s history, and by extension, myself.

During our first excursion into Habana Vieja, esteemed Cuban architect Ayleen Robainas Barcia told us a story about how Old Havana used to be surrounded by a stone wall dotted with fortresses in the 16th century. It was a project meant to keep out pirates and other bandits but was soon torn down when the barrier operated poorly due to its position and elevation. Around the area, we explored remnants of a citadel and cobble streets worn down by horse carriages.

Days later, our Spanish professor assigned us homework comparing Havana of the 16th to 19th century to what our birthplace was like during the same period. When I told her I was born in the outskirts of Manila, she let out a knowing nod and “Ooh.” Manila, similar to Havana, was enveloped in a muralla and until now part of our capital is called Intramuros–within walls. Like Old Manila, Habana Vieja has the same cobble streets and horse carriages catering to exhausted tourists. Same bustling plaza with a picturesque church. Same odd feeling of belonging.

Further west, just blocks from our casa particular, stands the Malecón, a boulevard skirting the shoreline. Behind it is endless turquoise ocean, with waves that spray above the wall in a glittering mist. I always said that I felt at ease by the water; between smiles and similar stories and sea, Havana does not make it difficult to acclimate.