Are Women’s Issues Part of the Leftist Agenda in Argentina? 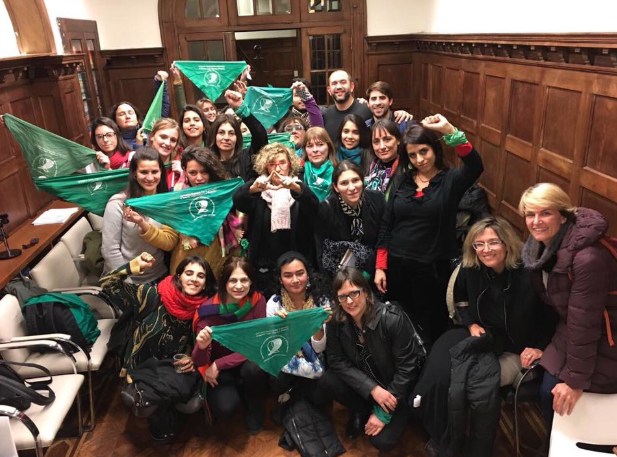 Abortion activists, feminist experts, and diputadas attending “The Feminist Fabric in the Sanction of the Bill for Legal and Secure Abortion within the Chamber of Deputies” event at CLACSO.

Throughout my time in Buenos Aires, I have been able to observe and study the feminist social movement surrounding the abortion legislation that is now being debated in the senate. I am, just like many other foreigners, guilty of comparing the politics back home to those of my host community. These tend to be unfair comparisons, as Latin America has been a tremendous target of American neoliberalism not only through economic policies, but also through its historical influence on military dictatorships in the region.

As American politics have become more polarized in the last few years, there are many social issues that have become part of the “leftist” social justice agenda. This agenda tends to include women’s rights issues. After examining how the social agenda in the Latin American region is clearly different from that of the U.S., I started thinking, are women’s issues part of the leftist agenda in Argentina- or not? Due to the different economic crises that this country has endured, are economic class issues more predominant within the leftist agenda? Are women’s issues further down the priority line due to women’s historical oppression and thus being socially classified as second-class citizens?

Running into these questions made me reflect on my position and my identity as a Dominican-American woman living in the East Coast, but it also made want to further listen to women in the feminist movement in Argentina in order to gain a better perspective on how these issues may or may not be necessarily a political party’s main priority. I attended multiple lectures in order to gain more knowledge from different feminist experts. In a lecture titled “Feminism in the Discipline of International Relations” hosted by Facultad Latinoamericana de Ciencias Sociales (FLACSO), many feminist experts touched on this topic. Karina Bidaseca, a feminist sociologist, explained how women’s issues have been “forgotten” by the left as political parties tend to not prioritize them. These issues may include reproductive health, domestic care, income inequality, and many other feminized issues. Karina’s explanation concluded that many of the leftist parties do include women’s issues but they may not be addressed due to the patriarchal structure of these organizations in which many women’s voices are silenced.

In another event hosted by the Consejo Latinoamericano de Ciencias Sociales (CLACSO) titled, “The Feminist Fabric in the Sanction of the Bill for Legal and Secure Abortion within the Chamber of Deputies,” several feminist diputadas spoke on this issue and how many women’s issues have been pushed by activists-turned-diputadas within these parties. They then confirmed how it has also been a battle due to the parties still upholding patriarchal values that tend to not include women in the dialogue. Argentina has had legal abortion under three circumstances since 1921 –health, rape, to save the woman’s life– Argentina is one of the countries, along with Chile, in which abortion is legal under certain circumstances. Yet, in Chile’s case, it was not until mid-2017 that Michelle Bachelet’s center-left government passed a bill for abortion under similar health-related circumstances.

It is important to highlight that patriarchal issues within political parties is not a Latin American phenomenon, but it is one that these women politicians, and many other politicians around the world are still battling when bringing women’s issues to the table. These are universal patriarchal norms that have been upheld against all types of women leaders. However, the conversations amongst these feminist experts in politics shows me how the narrative is changing as more and more feminist women are speaking up and creating legislations that will impact the lives of not only Argentine women, but all the women in Latin America. Argentina’s current movement has inspired women activists in countries like the Dominican Republic, where abortion is currently restricted with no exceptions.