Atrocity in the Amazon — A Devastation of Trees, Tribes and Traditions: GPIA Conference Preview 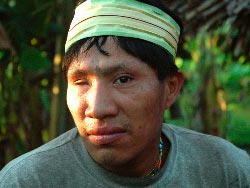 Our new social initiative, La Selva Guardia, presents the problems caused by the illegal extraction of Peruvian big-leafed mahogany trees. Facts presented are the results of preliminary research conducted for the lauch of our first Amazonian endeavor. We chose to create an illegal-logging initiative, in part, because of its clear sense of wrong and right. Rarely in our multicultural and interconnected global world can a group of people so clearly and accurately be labeled as “bad guys.”

In addition to our desire to thwart villany, we recognize that the most pressing and permanent issue facing the world is the environment. Never has humanity faced a peril so permanent, globally inclusive and difficult to reverse. So, although we operate largely as a social initiative, we desire to guard the environment at large by encouraging the stalwart resiliency of the local indigenous peoples. The indigenous have been the environmentally responsible stewards of the rainforest for generations, and they should be rewarded, not punished, for their sustainable lifestyle. We seek to equip them with the knowledge, capacity and networking skills to continue their stewardship and stand firm against the aggressive onslaught of a ravenous global commodity market.

The focus of La Selva Guardia is to simultaneously address a diversity of issues, using a relatively low-cost project structure. In the creation of the project, we tried to tie as many social issues as possible into one coherent idea. Issues to address were chosen based on the knowledge of the founder, and the range of expertise offered within The New School’s various programs.

Big-leafed mahogany (Swietenia macrophylla) was chosen as the “lure” for the detection of illegal logging operations because of the following reasons:

The world is at a pivotal point in the protection of Swietenia macrophylla, and the preservation of even a few pockets of these trees could give Peru’s governmental agencies the time they need to fully develop an effective regulatory system for their protection.  Although big-leafed mahogany is being used as the “lure” for La Selva Guardia, its protection is not the solitary goal. Because most of the remaining trees are on nationally protected indigenous land, this puts Peru’s Amazonian tribes at serious risk of abuse or extinction. The effects that illegal logging operations have on indigenous communities are horrific.

La Selva Guardia will not operate on indigenous land without the permission of local indigenous authorities. In areas with the potential to contact the “uncontacted,” operations will be “in and out” with the least amount of impact, and the fewest number of team members needed to complete the task. But the indigenous peoples are not the only victims of the so called “logging mafia.” Many of the people who operate the logging camps are themselves victims. Forced labor, sex-slavery and abuse are commonplace. Research into the internal workings of the camps has shown that the men and women who actually work these camps are the lowest members of the mafia society, and are routinely abused by their higher-ups. Logging mafioso set up “hooks” to lure in desperately poor Peruvians, who have malnourished children and very few other employment options. After they arrive on-site, they are overworked, underpaid and enslaved. The following are facts and stories regarding abuse in the illegal logging camps:

Although these problems are well-documented, there have been few organizational changes to address them within the Peruvian government, and very few boots on the ground to put a stop to it. La Selva Guardia wants to fill that void. The following is a flow chart which outlines the procedures and goals of the operation.

The overarching idea is that as soon as a logging operation invades, a number of powerful NGOs will know the precise GPS location of the offenders. They are then in a position to put serious pressure upon the Peruvian government to dismantle the camp. They will then be able to see first-hand whether or not this has actually been done, without having to rely on third-party information. In essence, La Selva Guardia wants to provide the eyes for NGOs that have adequate funding, influence and media.