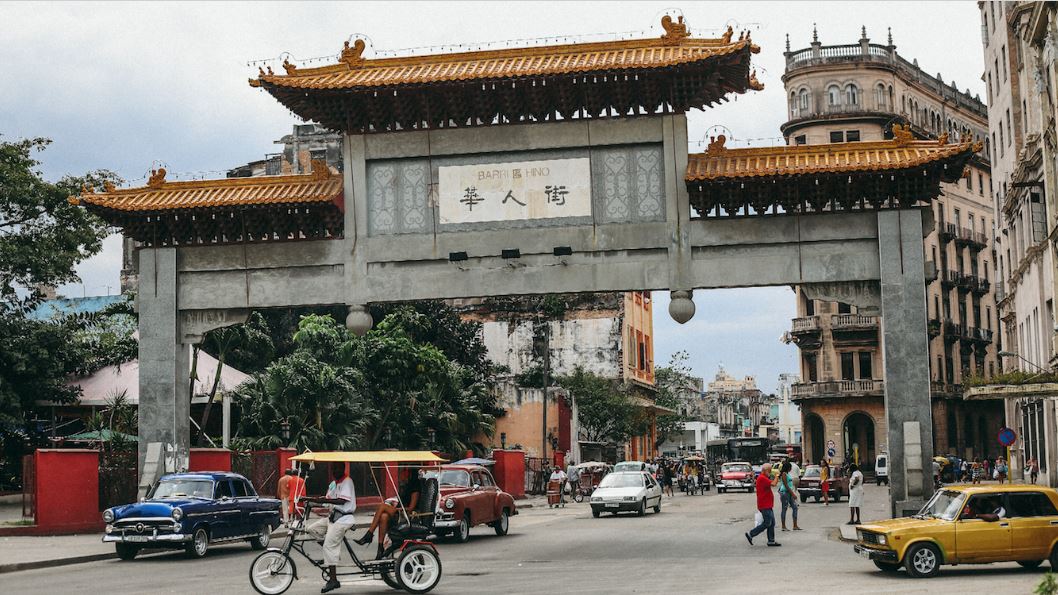 Cheongsam, in Cantonese, is a type of long dress that comes to mind when I tell you that Chinese women wear this! It’s very traditional, very formal, and in the past was reserved for Chinese women of upper class. When you go to Havana’s Chinatown, the first question that probably comes to mind is–where are the Chinese people? You’ll hear workers who are not Chinese proclaiming: “real Chinese chefs, from China!” and indeed, the one chef is from China. But the waitresses, a majority of whom are not descendants from Chinese ancestry, will be donning these cheongsams, as a sort of call for authenticity to attract tourists.  This gap between the presence of Chinese culture but the lack of presence of Chinese people is what stimulated my research process in Cuba this summer.

So, I’m walking with my group towards Old Havana during the second day of our two month stay—this walk is foreign, maybe about an hour from where we were staying in Vedado–I was wearing flip flops–and throughout this walk, I can feel all eyes on me, and not in a way like when I’m performing on stage and the spotlights mask the stares. No, I am whistled at and reaffirmed that I am indeed beautiful on this one hour journey. What we would define as offensive cat-calling in the United States is only perceived as a form of appreciation on the island. Normally, I would ignore the beckons and continue walking, yet the only moment I chose to respond was when my name was being called: “Mira la china”, I hear a child exclaim to his mother. I turned to lock eyes with the 8 year old in a futile attempt to let him know that I understood. The child obviously didn’t grasp the weight of his words, and he stared back with fascination. This fleeting moment of entitlement I felt to stare him down as if to say how dare you associate me with a country I’ve only been to once seemed to confirm my misunderstandings about race in Cuba.

I am my yellow skin and small eyes on this island, and you would think that with the amount of staring that gets done, I was the only Chinese person most Cubans have ever seen—granted I also have blonde hair and speak in English. For a city decorated with almendrons and Che posters that pave the streets as though one was still living in a revolutionary past, one part of Cuban history that doesn’t seem to be paid attention to anymore is that it was once the largest community of Chinese people in all of Latin America. 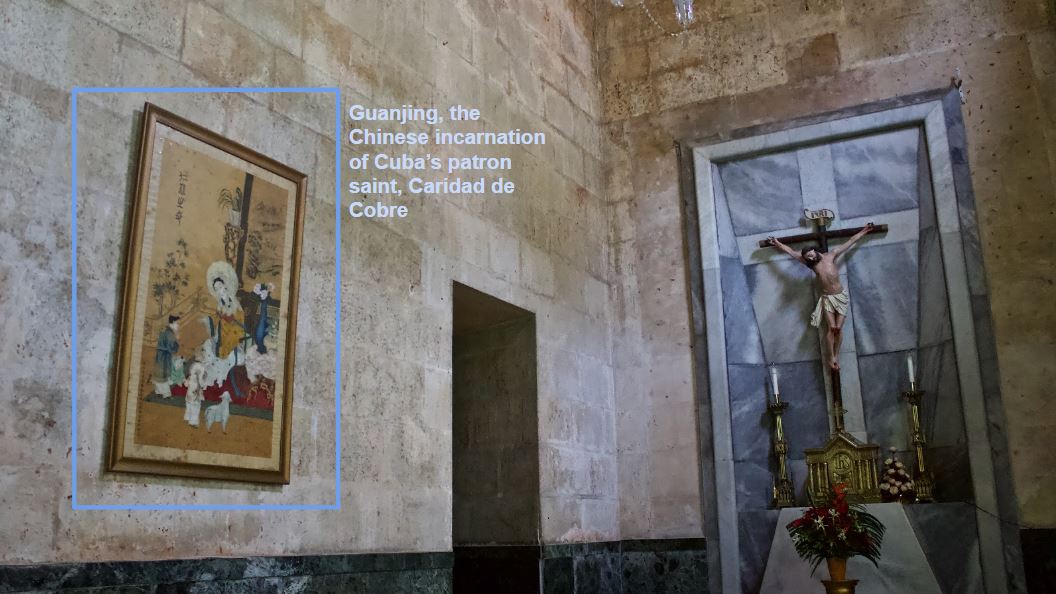 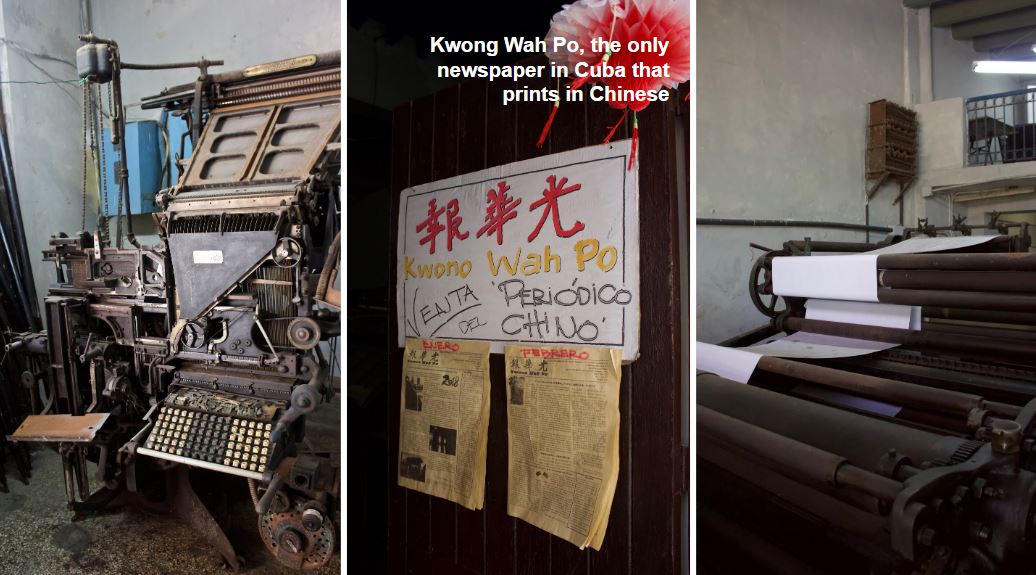 The purpose of my research is not only to provide a historical context for how there became a Chinese population in Cuba in the first place and why the numbers are so small today but also to understand how Chinese culture has become so deeply rooted in Cuban culture.In Cuba, differences are erased —todos somos igual—yet highlighted at the same time – mira la china. Chinese identity exists within a framework of Cuban identity—one would argue that you can’t have one without the other, even if you don’t carry a drop of Chinese blood.

Some of the driving questions behind myresearch include: How have Chinese immigrants contributed to the formative process of creating the Cuban nation? How have recent efforts to revitalize Chinatown and Chinese culture in Havana influenced tourism and the Chinese who still remain? Did such communities of color suffer repercussions from Cuba’s emerging ideology of ‘racelessness’ after Fidel? How does the import and then resistance and later testimony of Chinese coolies, or contract laborers, supplement the traditional western narratives of anti-slavery? Where are the Chinese in Cuba today?

My research is cautioned with the fact that I am Chinese-American, and with most minority-Americans, cultural identity, history and experience are quite often reduced to one, single story. My understanding of identity politics is highly privileged, developed through open dialogue in classrooms and among politically active circles, yet I am aware of the difficulties and stubbornness in breaking from the “progressive New School” lens. Therefore, my purpose is not to prescribe this same mindset to my study of coolie history and Chinese-Cubans today. As an outsider, my understanding of what it means to be Cuban is undoubtedly incomplete and flawed. Rather, I intend to discard political correctness and conformist vocabulary and allow myself to be called la china—what does it mean to be Chinese in the Americas—in Havana? I research the inter-struggles between coolie and slave, and I discuss the complexities of immigration, labor, race, language, and citizenship. I also research current activities and sites in Havana where Chinese-ness is permitted and encouraged, yet at the same time commodified for tourism and economic purposes. Because identity is abstract and adaptive to environment and experience, my research is limited to readings and statistics, verbal interactions, and conceptual translations of my own time in Cuba as a Chinese woman.

Among my many conversations with Cubans, it seems first dialogue always begins with the question: Where are you from?

And every time it’s been asked, my immediate reaction is to simultaneously laugh and sigh: I know they want me to say China, but I always give them the long, roundabout answer: I’m American—I was born in San Francisco, but my parents are from China.

The reversibility effect—when you clasp your two hands together, not only are you touching, you are also being touched. The Cuba I know is one that touches and is touched by a culture I live.

To those who actively engage in the revitalization of Chinese culture in Havana, who may not bear the same yellow skin and small eyes, they are fostering the very essence of Cubanidad—that the world is linked through several different lines of life, and solace can be found in the shared struggle of liberation.