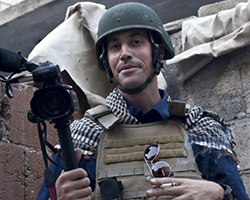 “As journalists. we are living through the most dangerous moment ever” said Committee to Protect Journalists Executive Director Joel Simon addressing a packed room last night at Columbia School of Journalism. A panel discussion entitled “After James Foley – Covering Conflict When Journalists Are Targets” painted a bleak picture of the harsh realities facing the next generation of journalists.

In Syria alone, 71 journalists have been killed, 80 approximately have been kidnapped, and 20 are still missing today. “This is the terrifying reality in which James Foley and Steve Sotloff lived and died.” Indeed, Jim Balboni, CEO of GlobalPost noted “There are two more Americans facing death at the hands of the Islamic State right at this moment and there are three other British hostages…it’s an unimaginable horror for the families and all those who work with the journalists.”

GlobalPost financed a multiyear investigation attempting to save Foley’s life, spending “well into the millions of dollars” according to Balboni. “There is no more fundamental responsibility that the leader of any news organization takes on than to stand by your people in the field” said Balboni. Unfortunately not all news organizations have shown the same commitment.

The reality of Kidnapping and the danger to journalists is something relatively new. “It was easier for my generation” said David Rohde a Reuters correspondent and former New York Times columnist of covering earlier conflicts, citing his time in Bosnia. “In Sarajevo the Serbs and Bosnian Muslims didn’t really like journalists, but we were seen as sort of a third party that all the local forces tried to manipulate and sort of trick into telling their version of the war, it’s changed now. You’re a target…a source of publicity and a source of money.”

With this in mind, journalists traveling into conflict zones need to be better prepared, seek out additional training, ensure they have proper equipment and communications tools, and should have a plan in the event that they are kidnapped. Rukmini Callimachi, a New York Times reporter and previously West Africa Bureau Chief forThe Associated Press said that rather than place her family in the impossible position of making decisions on her behalf in the event the unspeakable happens she has placed this responsibility in the hands of a close trusted friend who will carry out her wishes.

Callimchi also had tough words about the policies of European governments which pay ransoms to terrorists in the face of American policy which forbids it, something she covered in a recent New York Times piece. “We’re in a really terrible place where essentially our citizens are now being doomed by the policy of what Europe does” said Callimachi. “It seems that it behooves our government to at least put pressure on the Europeans to once and for all stop [ransom payments]. I have yet to see a single American official stand up and actually name that European countries that do.”

Complete video of the event can be viewed here.