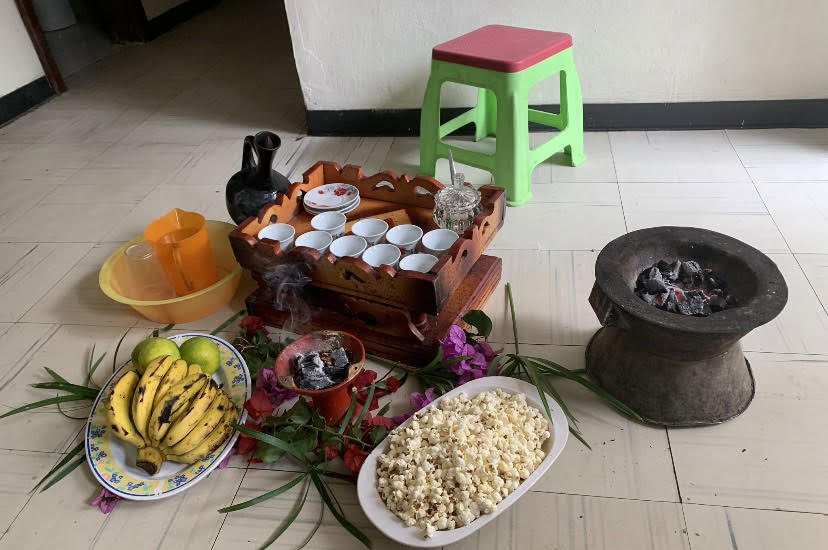 CW: The blog post below includes historical accounts of violence and torture.

Anastasia here. It is my second week in Ethiopia and we have been getting to know each other, as well as the bustling city of Addis Ababa. We are a group of 10, both from New School graduate and undergraduate programs, and will be working on a variety of independent and group projects during our time here. The daily electricity outages (the government is rationing the limited hydroelectric power available due to the long dry season), and a lack of fast wifi in our house, have certainly facilitated the getting-to-know each other part, and in a short period of time we have become quite a tight little group.

The orientation week has kept us up-and-running, as we visited historical sites, national museums, art galleries, and various projects sites. Our tight schedule was fueled primarily by the most delicious coffee – ’bunna’ in Amharic – I have ever had in my life (not an overstatement). Besides the silky-smooth flavor, each serving is a part of an entire traditional coffee ceremony, making it all the more special.

While everything around me, from language to flavors and surrounding nature is new to me, oddly enough I somehow feel closer to home (I was born and raised in Moscow) in Addis than I ever did in six years in New York. Some of the more obvious reasons are, probably, being in the same time zone as Moscow, Orthodox Christianity as the dominant religion, hundreds of Soviet LADA cars used as taxis around Addis, and a square named after the renowned Russian poet Alexander Pushkin. Besides, similar to Moscow of 10-15 years ago, Addis, despite widespread development and construction, for now, remains strikingly non-homogenous as little shops and informal economies persist.

But outside of my own feelings, Russia and Ethiopia share a very dark set of historical events that happened in both countries at different times. I did not intend to have my first blogpost from this exciting journey be grim, but our group visit to the Museum of Red Terror left me deeply shaken. In Russia, Red Terror was a period of political oppression carried out by the Bolsheviks during the 1917-22 Civil War, though political repression persisted late into the 20th century, culminating with Stalin’s murderous rule. In Ethiopia, Red Terror took place in the 1970s, triggered by a sudden switch from centuries of monarchy to communist rule.

For the majority of 20th century in Ethiopia the power remained in the hands of a single man, Emperor Haile Selassie. Student protests were sparking all over the country over the lack of social and political change. But the civilian government that student activists were fighting for never came to fruition, as a Communist militant junta, called the Derg, overthrew Haile Selassie and began their violent rule.

The museum has a copy of a document that orders the killing of dozens of Haile Selassie-era government officials, many of whom patriotically fought against the 1937-41 Italian Occupation of Ethiopia. The man who ultimately came to power in the Derg and gave out the orders, including Haile Selassie murder, was Mengistu Haile Mariam.

The repressions were meant to suppress the spreading anti-Derg underground movement. Anyone intellectual, from students to teachers and their entire families, was no longer safe in Communist Ethiopia. The Derg left dead bodies out on the streets to instill fear in people, they persecuted families for trying to bury their loved ones, they locked more people in prisons than the cells could possibly hold, and they used horrendous torture methods to get people to talk (whether or not they actually had any connection to the opposition movement). One of the most heartbreaking parts of the museum was a large wall that displayed the photos of many Red Terror victims, who ranged from young children to elderly people. Our guide did not share his experience during the Red Terror, but his storytelling made it quite clear that he witnessed the horrors firsthand.

It was hard for me not to compare the Ethiopian Red Terror events to the mass political repressions that colored the Soviet history, as well as the role Soviet assistance played in what happened in Ethiopia (the museum displayed several Kalashnikovs used by the Derg police). I have mostly learned about Soviet political repression out of my own interest, as the early 20th century history I learned in school and through culture is overwhelmingly concerned with the glory of the Revolution and Russian victories in World War II. The millions of deaths brought by the Soviet manifestation of communism has hardly been reconciled in Russia despite the change in political regime. It was fascinating to be in a space that blatantly displays the terrors Ethiopian people have endured. Moreover, before the IFP I had never heard about Russian engagement in Ethiopian affairs, which, considering the bloody outcome of the Marxist-Leninist project, is not surprising. As Perestroika began and the USSR started to collapse, so did the Derg’s power, so Mengistu was finally overthrown in 1991. He remains today in exile in Zimbabwe. To get a deeper perspective into this topic, I highly recommend the novel Beneath the Lion’s Gaze by Maaza Mengiste that tells a story of a single family surviving the Red Terror.

Although the government that ruled after the Derg for over 25 years was ‘democratic’ on the surface, the majority of power remained consolidated in the hands of the state. Not unlike Russia, Ethiopia also enjoyed little to no political freedoms for most of its history. However, the last two years here have been deeply reformative due the election of the most progressive ruler Ethiopia has ever had, Prime Minister Abiy Ahmed. He has released many political prisoners, encouraged press freedom, and opened up to private market. Still, issues like LGBTQ+ rights remain completely out of discussion, so I am curious to learn more about the local people’s perception of the political, economic, and social climate in the country today.

I look forward to learning firsthand the fascinating history of this beautiful country, getting to know its people, and continue sharing about my journey.