If you could break the rules, what would you do? 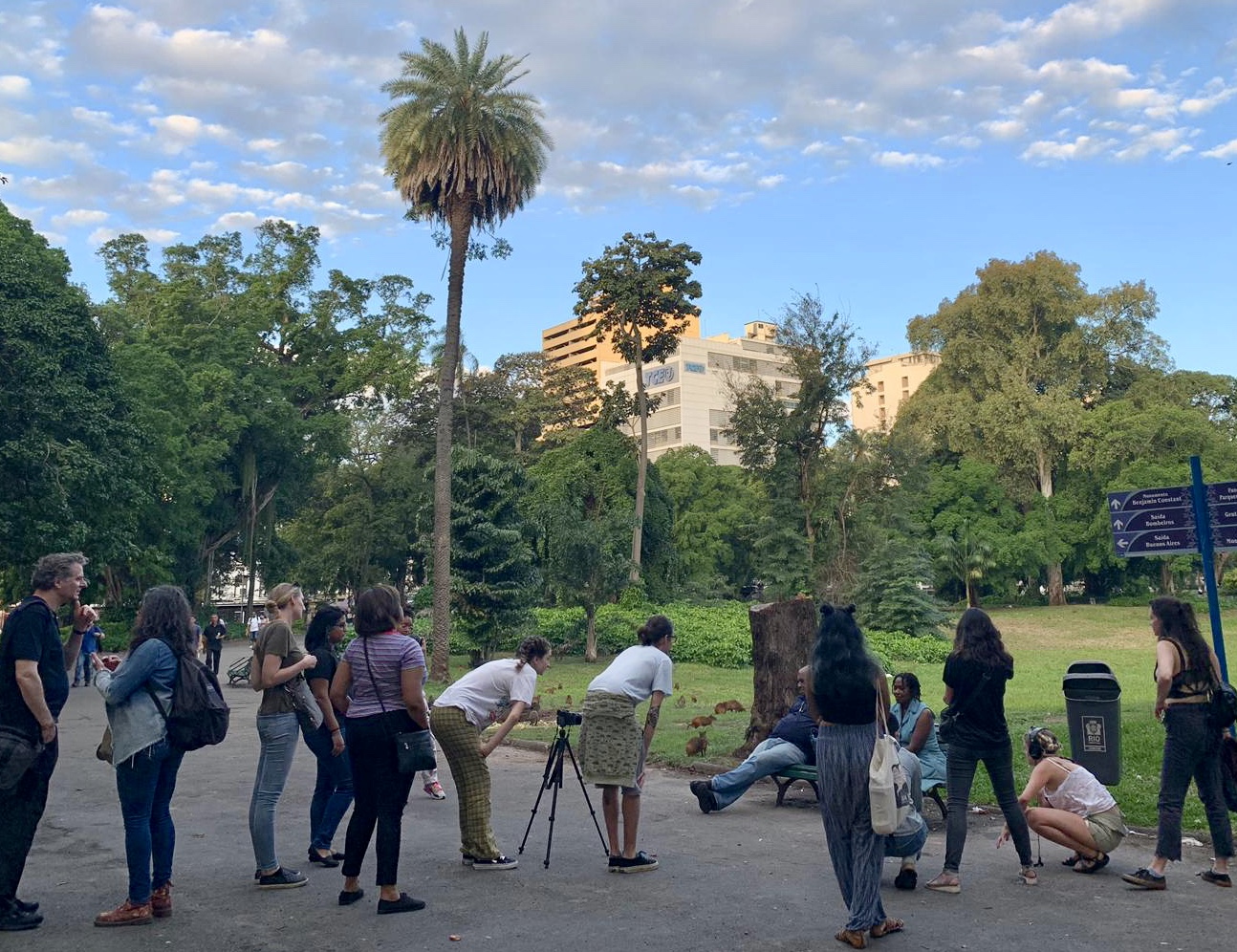 If you could break the rules, what would you do?

After a week of exploring the new sights and sounds of Rio de Janeiro, our group set off Monday afternoon with cameras in tow, ready to ask this seemingly simple question: If you could break the rules, what would you do?

We’re asking this question as a follow up to the The Rules, a collaborative documentary film made by the Brazil IFP group in 2017 and produced by our faculty lead, Peter Lucas. The experimental participatory project is meant as a starting point for more discussion about rules and rights, and a chance to listen in on people’s ideas across the city. Post-Bolsonaro, the question itself strikes a particularly interesting chord. Already, we are fielding vastly different political responses depending on the places and times we film.

On Monday, we headed downtown towards Campo de Santana, a park located in Praça da República near the original site of Brazil’s declaration as a Republic in 1889. Today the park is a meeting point of sorts, and home to a variety of wildlife. Each day you’ll see ducks, capybaras, cats, and peacocks all roaming about lazily through the park. After a quick visit with the capybaras, we set down our tripods and began interviewing.

At first the group was a little unsure of where to begin…who do we ask, how do we approach people, is the gear set up correctly? Am I using the correct word in Portuguese?

What rules are *we* breaking?

First we found a man playing guitar on a park bench, and after some initial back and forth, he agreed to speak with us and answer our question: Se você pudesse quebrar as regras, o que você faria? Next, we filmed with a woman selling herbs on the other side of the park. As she spoke to us, a man playing flute nearby showed interest and added his response as well. From those first few conversations, things slowly came together, and the process began to unfold. Navigating the many unknowns of this project has been an exciting challenge, and asking a question about “breaking the rules” is perhaps the best framework to approach this work. The notion of breaking the rules is a constant reminder to be open to improvisation, especially as we become familiar with a new language, place, and skills.

While we continue to collect interviews for The Rules throughout the summer, our group is also working on creating an interactive website that aims to map Rio’s public spaces through the lens of human rights – documenting different places and sites of cultural heritage that exist across the city. So far it’s been incredibly helpful working with local contacts who serve as translators, guides, and key connections in Rio.

As we begin our work mapping the city, we’ll be working closely with one of our main partners, Cinema Nosso, an audiovisual education and cultural center based in the heart of Lapa. Originally created in 2000 under the name Nós do Cinema, Cinema Nossa is the direct result of the casting selection process for the film Cidade de Deus (City of God) directed by Fernando Meirelles and Kátia Lund. After filming of the movie ended, the directors and crew wanted to maintain the spirit of production, and created Nós do Cinema as a workshop to continue the work and ideas sparked during filming. In those early years, Cinema Nosso established a strong focus on providing audiovisual education to young people and preparing them to produce films and launch careers within the market. Since its founding, Cinema Nosso has evolved into a dynamic social and cultural institution, and one of the largest film schools in Latin America. Today, the organization places a strong focus on using audiovisual language to connect youth to new technologies and industries, and has even expanded into offering animation, gaming, and STEM-themed workshops. In addition to holding hundreds of public events and screenings, Cinema Nosso has hosted over 3,500 young people through workshops and regular courses over the past 15 years.

After wrapping filming in Campo de Santana, we headed towards the Cinema Nosso headquarters for a screening of a short documentary about the history of the organization and its mission, followed by a Q&A with founder Luis Nascimento. Nascimento spoke about the increasing importance of providing critical access to new technologies to young people, especially those from communities that haven’t traditionally had access to cinema education and technical resources. In the film screening, a particular quote of his jumped out at me: “We make films together, never alone.”  Just as this notion of collaboration is ever-present through all of Cinema Nosso’s work, we’ve already begun to feel the importance of teamwork in our IFP efforts over the past week. Every role on set is equally important, and the way we collaborate with each other has made all the difference. It’s been an exciting privilege to kickstart our summer projects here with the support of Cinema Nossa, and we’re all looking forward to continued collaboration in the coming weeks. Today we’ll log and edit our footage and head back to another location to shoot more – asking questions and listening closely. The city holds endless opportunities for these conversations and we’re excited to be at the very beginning of this journey.