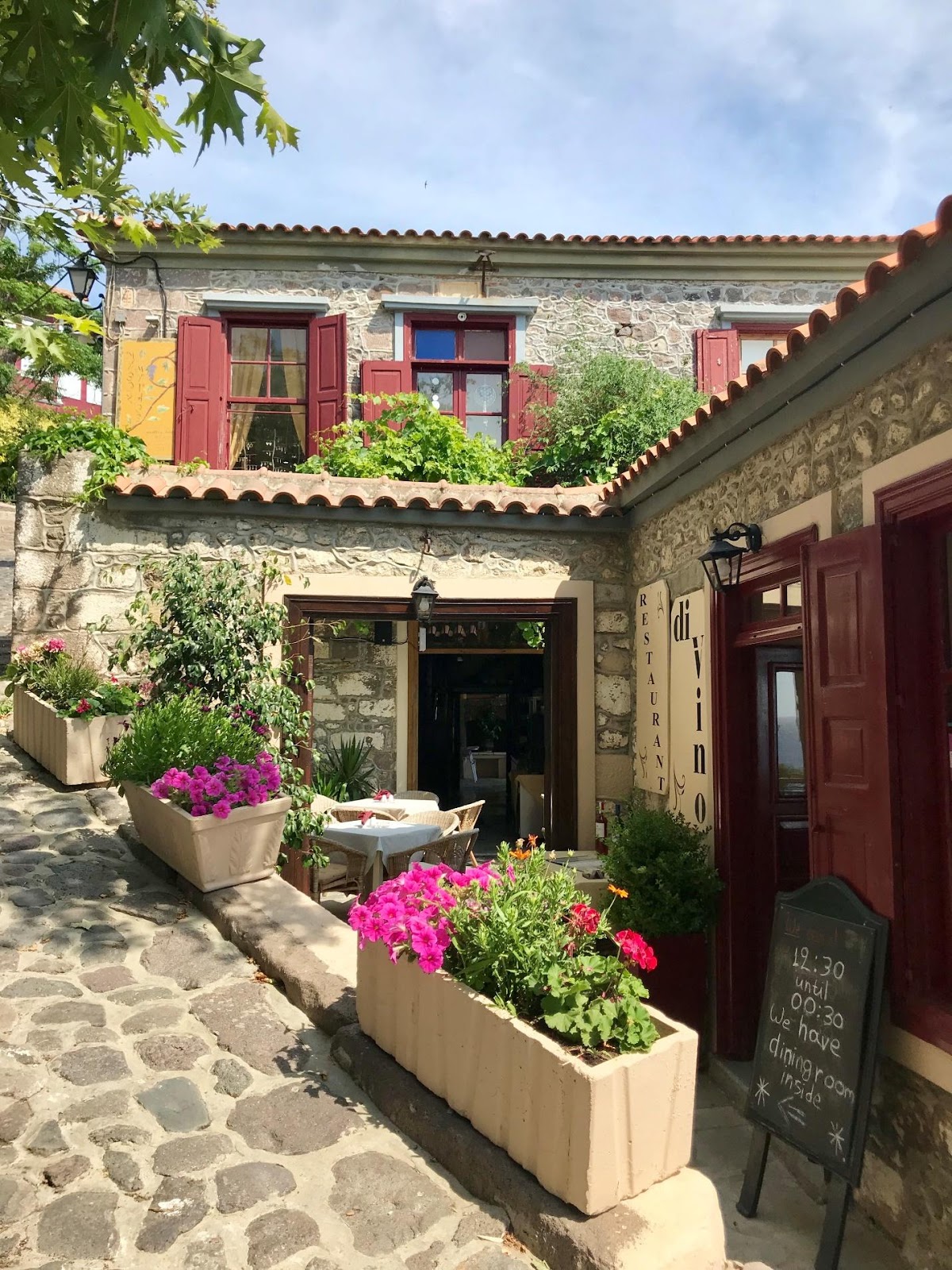 We are two weeks into life in Mitilini and everything is becoming more familiar. Every time I step out of my apartment I am greeted by an excited puppy named Buddy. Small and white, his DIY haircut has left his fur in an uneven and adorable fluff atop his head. My walk to the city center is spent getting as close as I can to parked cars as motorbikes driven by teens, parents, and grandparents alike whizz by, sometimes almost grazing your shoulder. Sidewalks are not always present on narrow roads. The town is vibrant with fresh fruit coloring the streets in baskets and shelves outside local produce stands, while fish stores proudly display the morning catch as an employee shouts the different selections to passersby. I’ve gotten used to open smoking at restaurants and cafes, clouds of smoke mix with Greek coffees and freddo cappuccinos. Daily greetings of “γεια σας”, hello, and “Καλημέρα”, good morning, stand out from the chatter. Ever-present in the dock that curves around the city center are the Frontex ships.

Frontex is the European Border and Coast Guard Agency. According to the Hellenic Coast Guard, Frontex ships have been in Mitilini since 2009, but once the migration “crisis” began, multiple Frontex ships have remained in its port. Since we’ve arrived, they’ve been the same: one British and one Italian ship. There are two additional Hellenic Coast Guard ships and they all park in different places around the dock in the city center. These symbols of security are also reminders to refugees that Europe is watching their borders. They are watching refugees. Freedom of movement, and the right to seek asylum out of fear of persecution, are conditional. Obtaining approved asylum status is a lengthy process that depends on evidence and papers you can present (if they were not lost at sea or stolen), luck, and perhaps even a press-worthy story of tragedy or heroism.

Lesvos is still receiving refugees daily. As the summer months continue, the number is likely to increase as it already has from May to June. Migrants fleeing conflicts, government instability, political persecution and gender-based violence are only some of the reasons they make their way to this island in the Aegean. As an island it provides an interesting space, not only for conducting field research, but for considering how space is used for a specific purpose. A few of us, myself included, are looking at space in some context. Spaces of confinement, of safety, belonging, healing, and insecurity. Choosing to keep migrants on islands as they wait to hear if they are granted asylum is strategic. Keeping them in a camp that was a former military base, hidden from the rest of the island, is intentional. Movement to other parts of Europe is not easily done, movement on the island itself is not always easy. The main camp, Moria, is an hour walk to the city center. Buses are infrequent and cost money, a luxury not easily spared to many  refugees. Spaces can dictate movement.

Last weekend our group visited the Lifejacket Graveyard in Mithymna. A donated piece of land that Google Maps labels as a “garbage dump” houses thousands of lifejackets from refugees who have crossed the sea to Lesvos. A few years ago when daily arrivals by sea were by the thousands, the beaches were covered in the lifejackets. With the area of arrivals too remote for garbage trucks to make the journey along the narrow dirt roads, and a concern the beautiful beaches would be polluted, the life jackets, just like refugees, were moved inland and out of sight.

Only minutes away from the graveyard is Molyvos, a seaside town with a distinct tourist vibe. As opposed to Mitilini which is bustling in comparison with locals and visitors, Molyvos was deserted. The shops, restaurants, and beaches seemed entirely occupied by pasty foreigners. It was an odd contrast to where we had just been. Moving refugees across the island to a less touristy town as opposed to keeping them in a nearby area, again, must be intentional.

The process for asylum is years long. With borders closed and neighboring European countries neglecting to take in more refugees, the island and camp become more of a trap, a jail sentence, than hope for the future. The intentional use of space, of where we house people seeking freedom and safety, where we discard remnants of a tragic journey, and where we display our security actors, are important to pay attention to and question. They highlight how access to spaces refugees can freely use that provide services and care are even more important. Questioning my own right to be in this space, asking these questions and analyzing their purpose, is an important part of field work. I am privileged to be able to visit for a short time, learn, and leave. Refugees, instead, wait without much knowledge of how long they will remain on Lesvos.