Fighting for Justice in El Salvador, Four Decades and Counting 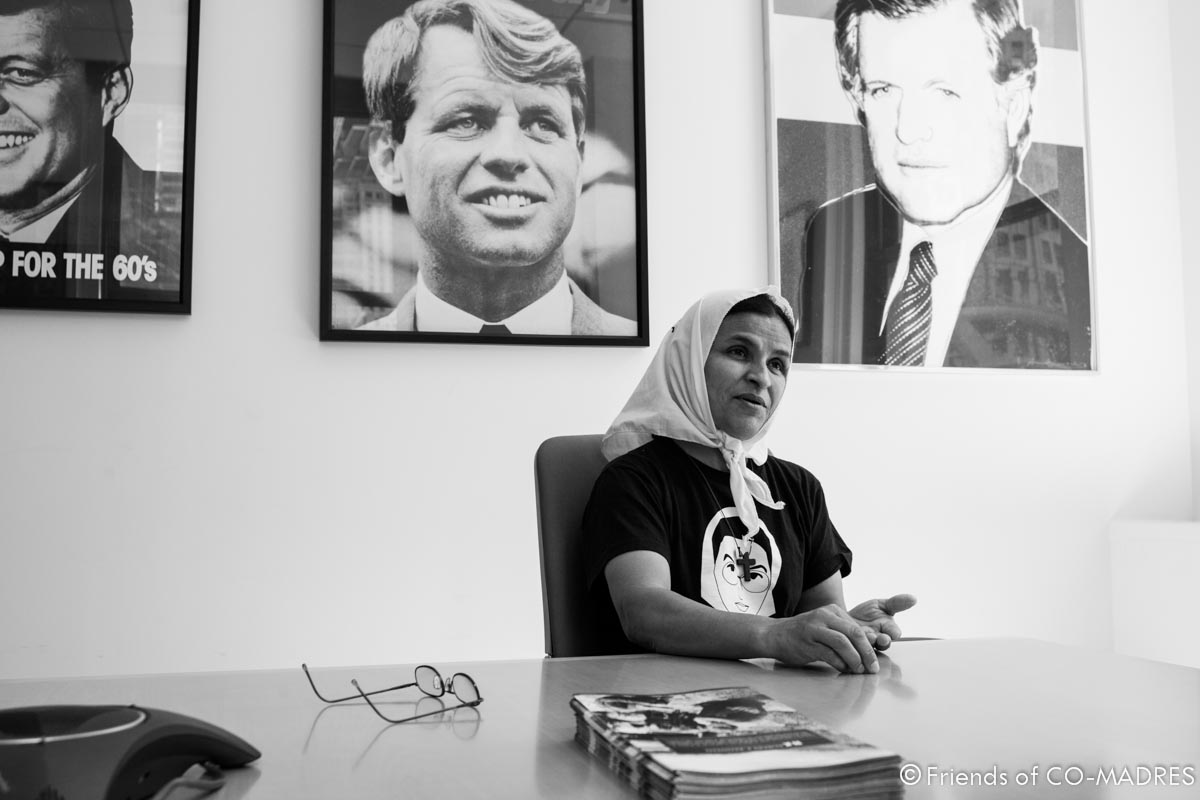 Patricia Garcia during an interview at Robert F. Kennedy Center for Justice and Human Rights.

Years before the civil war in El Salvador officially began, government-funded death squads had been killing and disappearing those identified as anti-government dissenters—including clergy, community and union organizers, students and professors—in a conflict that pitted a few elite families allied with the military against the vast majority of the population who lived in crushing poverty.

After one particularly brutal massacre of more than 100 University of El Salvador students during a protest march in 1975, mothers of the victims started joining together to search for their children—some of whom were jailed and interrogated. Encouraged and supported by Archbishop Oscar Romero, The Committee of Mothers and Family Members of Political Prisoners, the Disappeared and Assassinated (CO-MADRES) quickly made a name for itself as a vocal activist group—staging sit-ins and marches, occupying embassies and churches, documenting human rights violations and writing newsletters. While reconnecting mothers and their disappeared sons and daughters and raising an increasing number of war orphans in their office, they received international attention from groups such as Amnesty International. CO-MADRES soon became a network of 500 women, too big to ignore.

Engaged in the Cold War and assuming Cuban and Soviet influence in Central America, the United States backed El Salvador’s military government against the left-leaning organizations and rebel groups that would combine to become the Farabundo Marti National Liberation Front (FMLN) in 1980. That year Archbishop Romero was assassinated and the civil war began.

In 1992, a UN-brokered peace agreement was signed by the government and the guerillas. A generally successful disarmament and re-integration project folded the FMLN into a legitimate political party by 1994. The catch? The military and FMLN also signed a separate amnesty pact that, among other stipulations, allows war criminals to escape justice.

Patricia “Patty” Garcia, a leading proponent of the Truth and Justice for El Salvador Tour, is visiting the New School to continue the fight for justice and reparations for civilian victims of the war. A goal of the Tour is to put international pressure on the Salvadoran Government to comply with the recommendations of the UN Truth Commission report of 1993 (“Widespread human rights violations committed during the internal armed conflict remained unpunished” states an Amnesty International report from 2008).

Sitting on a stool in front of 15 of us inside the New School’s Bark Room, a low-ceilinged and relatively intimate setting, Patricia Garcia, petite with straight black hair, a black CO-MADRES T-shirt and jeans, cuts a low-key figure as the focal point of the event. It is an informal gathering (including activists from SHARE El Salvador) and a lively discussion occurs on everything from the broken promises of the first-ever FMLN-led government—under president Mauricio Funes elected in 2009—to the need for solidarity with Honduran activists and better textbooks in schools.

A gregarious man in the audience asks Patty how she got started in this work. “What a question!” she replies and those in-the-know connect with sad, knowing smiles. My translator-friend echoes the sentiment. The tragedies must be told; that is the whole point.

In 1978, refusing the safety of exile in Mexico, twelve-year-old Patty went back to El Salvador to plead for her brother to be released from detention. There she found that the rest of her family, active in the local church, had been killed or disappeared.  According to an interview she gave in 2012:

[Patty] ran to the archbishop’s office. “Monsignor Romero told me that if I wanted to stay, I could not continue to work within the church because it was too dangerous. ‘A terrible violence is coming,’ he said. He counseled me to work with the CO-MADRES instead.”

But Patty’s experience with unimaginable horror was only beginning. In 1991, while helping teenagers recover from bombardment injuries at a hospital, she was captured for the second time. For more than twenty days, she was brutally tortured in an Inquisition-style series of rooms at the National Guard headquarters. Though she has told the story many times before, Patty struggles to get the words out at several points, wiping away tears while speaking.

She describes being stripped and beaten and given the “Silencer,” when two phonebooks are slammed against both sides of your head at the same time. When she regained consciousness, she was on a metal bed and given electric shocks. Asphyxiation and waterboarding followed. She was thrown into a deep pool and was shocked by electricity when she tried to climb out—she remembers it was a game to the guards. (I am relieved that my translator never says “rape,” though the 2012 interview reveals that she was repeatedly raped.)

She remembers lying blindfolded on a concrete slab and feeling heat near her head, generated from a saw used for cutting people. She prayed for forgiveness and told herself death wasn’t painful. Then the two guards got into an argument. Naked during her torture, the soldiers returned her clothes, and she remembers being thankful, but only because her body might be recognized after she was killed. One told her she was lucky. An order had come down that she must be let go, without further harm. In an office upstairs, with her eyes blinded by the daylight, the guards told her that none of the torture and pain had really happened, that her mind was unreliable, that it was just a bad dream. Why? Several Americans had come to see CO-MADRES.

U.S. Senator Ted Kennedy, a longtime observer of the Salvadoran crisis, had visited the CO-MADRES San Salvador office with a delegation ten days prior to Patty’s capture. When the senator received the news about Patty, he rallied international support to bring awareness and put pressure on the Salvadoran government to get her released. Afterward, Senator Kennedy invited Patty to do a speaking tour of the United States and she addressed Congress in 1991.

Today, Patty and her collaborators on the Truth and Justice Tour still seek the attention of Washington, grassroots activists, potential donors and anyone willing to help. The new deadline is March 2014, when an election could reverse the small gains the current administration has allowed their movement to achieve. With the FMLN nominally in power, internal and international pressure might have a chance at implementing measures of justice. President Funes hasn’t addressed the claims of thousands of lives that are still afflicted by the various traumas of a decade-long war against civilians, but at least he is officially supportive of a reparations policy.

The Pro-Historical Memory Commission, a coalition of human rights groups (including CO-MADRES) that Patty cofounded, continues to address the festering wounds of the war—doing everything from maintaining databases to exhuming bodies for identification and helping bring cases of human rights violations to trial.

A coffee can is passed around the room and gets filled. The goal of the Pro-Historical Memory Commission is $15,000, modest by most fundraising standards. But it’s not for the money that these horrors must be repeatedly exposed. It is this kind of historical education that chips away at future tragedies.