Where are the eggs? 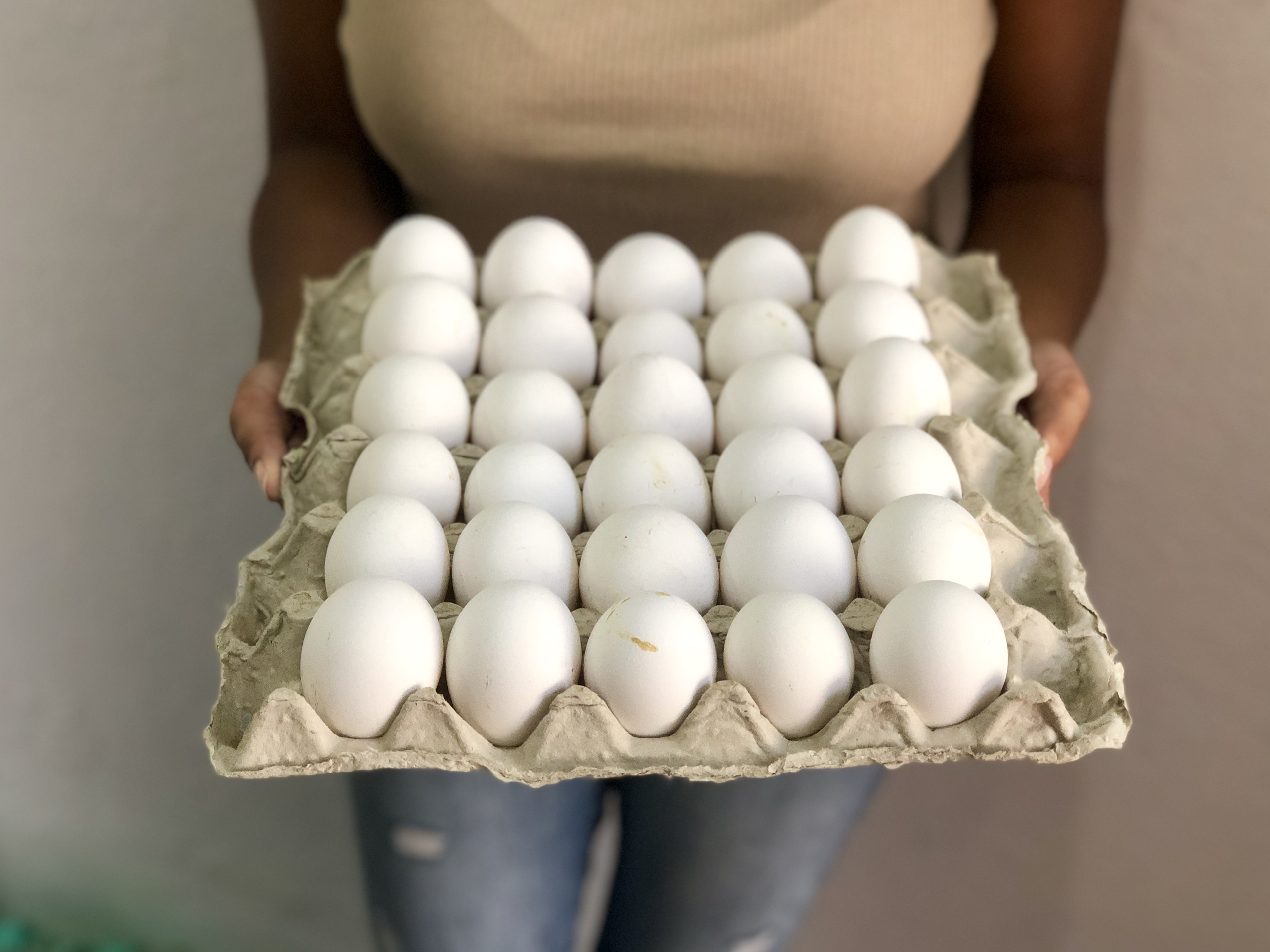 ¿Dónde puedo comprar huevos? I asked our host, Isis, curious about acquiring some fresh eggs. If anyone knew where they could be found, it would be the woman who serves us two hefty plates of fried, scrambled, or omelet-style eggs at 8:30 each morning. While at-home breakfast is included in our rent, lunch and dinner need to be sourced elsewhere—and after three weeks of eating at restaurants and paladares, I explained to Isis that I just wanted to cook myself a simple meal of rice, beans, and eggs.

“Change your menu,” she said with a tense laugh. “It’s very difficult to find eggs in Cuba.” True, I had yet to encounter eggs in any grocery store aisle or market stall. There were other basics I hadn’t seen at formal or informal shops either, like rice or tomatoes. But her response still puzzled me considering what (and how much) she feeds all twelve of us: In addition to eggs, Isis dishes out bread, butter, cheese, pastries, fruit, juice, milk, and coffee. Occasionally, we might start our day with yellow rice, bacon, or vegetable soup.

I realized that in Cuba, where essentials are scarce, our daily feasts were acts of magic. Isis made fresh milk appear where only powdered versions existed. She pulled tomatoes and avocadoes out of thin air. Once, we let out a collective gasp when she placed ketchup on the table—It doesn’t sound like much but trust me when I say the condiment is impossible to find here, and Isis taking it out of the fridge was probably not unlike extracting a bunny from a hat. Of course, spectators at magic shows are often unaware of what goes on behind the scenes. The reality is that putting food on a Cuban table is more challenging than we (with our farmers’ markets and Amazon Fresh) can imagine.

Following the collapse of the Soviet Union in 1989, Cuba entered an age of severe shortages and economic crises. During this ‘Special Period,’ the state-subsidized distribution of food dwindled to a trickle and until now rations meant to last a month can feed people for only ten to fifteen days. A majority of the food available for purchase in the market is imported and priced out of range for underpaid state workers, while unstable relations with the US threaten the supply of food and currency entering the country. As a result, Cubans regularly speak about the daily lucha, or fight, for provisions and the constant need to resolver. While the pressures of food acquisition and provision are felt all over the island, women like Isis are disproportionately affected by food insecurity due to their role as primary caretakers. My own research aims to identify how women in Havana supplement the gap between what is provided by the state and what is needed for women to feed themselves and their families.

In her paper about Cuban mothers making ends meet, Rebecca Burwell (2004) recalls how an oft-asked question at the start of the century was “Dónde están los huevos?” I find myself asking the same thing in the summer of 2019: Where are the eggs? One afternoon, I decided to try and uncover the answer. After seeing Isis’ son carry 3 cartons of eggs into the apartment building (undoubtedly for our breakfasts), I inquired where I could buy some of my own. He seemed hesitant to spill the beans at first–merely saying he found them “on the street” —but then he whispered something about trying “17 and K” before disappearing out the front door. Armed with this tidbit of knowledge, I grabbed my friend Keri to help me investigate. She, too, had been searching for eggs for weeks and was thrilled to finally have a lead.

From our casa particular on the corner of 9th and F, we hurriedly walked the eight blocks and five streets over to 17 and K. Isis’ son led us to an outdoor agro-market larger than the ones I’ve encountered thus far, but with goods and a layout resembling the others: There were lots of empty stalls, with the few open ones selling only meat, bread, onions, carrots, cabbage, and mangoes (lots of mangoes). The eggs, unfortunately, were nowhere to be found. Perhaps eggs were so prized that they were hidden like buried treasure?

Feeling slightly confused, we got back on the street and walked further down but found no other shops in the area. We were on the verge of giving up when we saw an old man heading the opposite direction, gingerly supporting a carton of eggs with two wrinkled hands. I approached him carefully to ask where I could buy some, and with a smile he answered, “la libreta.” The ration booklet. We were back to square one. Or so we thought, until another man who must have overheard the exchange approached us to say he had what we needed. He told me and Keri to wait where we were, then reappeared five minutes later with thirty perfectly-white, large, fresh eggs. I don’t think either of us had ever been so happy to see some shell-encased protein (least of all me, who had been vegan before coming to Cuba.)

The ‘moral’ of the story could be a clichéd yet true message about not taking what we have (like well-stocked grocery stores and 24-hour bodegas) for granted. But more importantly, and beyond learning to appreciate our Global North comforts, the experience challenged us to reconceive how we think of ourselves as citizens: Who are we without our ability to consume? In New York, where the atmosphere is marked by individualism and entrepreneurship, citizenship is tied deeply to consumption. The greater the capacity you have to obtain goods or services, the ‘freer’ you are as a citizen. In Cuba, where acquiring eggs involves a great deal more than going to a store and exchanging money for merchandise, citizenship means embeddedness in the community. Everyone is in the lucha together, which makes clear why the unofficial motto is Sociolismo or muerte: Kinship or death. A play on the country’s actual motto (Socialism or death), the phrase highlights how survival depends on being creative and connected.

In Burwell’s (2004) article, one of the women she interviewed identified the role of Cubanismo —the national ethic and identity of shared struggle—as essential to everyday life:

“This is the way in Cuba, we are always helping people. We work together. We have to in order to survive. You don’t see this in other countries. It is because of our struggle, because we are unique.”

When Keri and I got home after cautiously walking back with our eggs, she wondered aloud what she would do if the others asked for some of our precious protein. We had gone through quite a journey to get them, and her first instinct was to guard what we ‘worked’ for. After placing the goods into the fridge, she turned to me and said “Actually, I think I’d have no problem giving them away. It’s the Cuban way.”