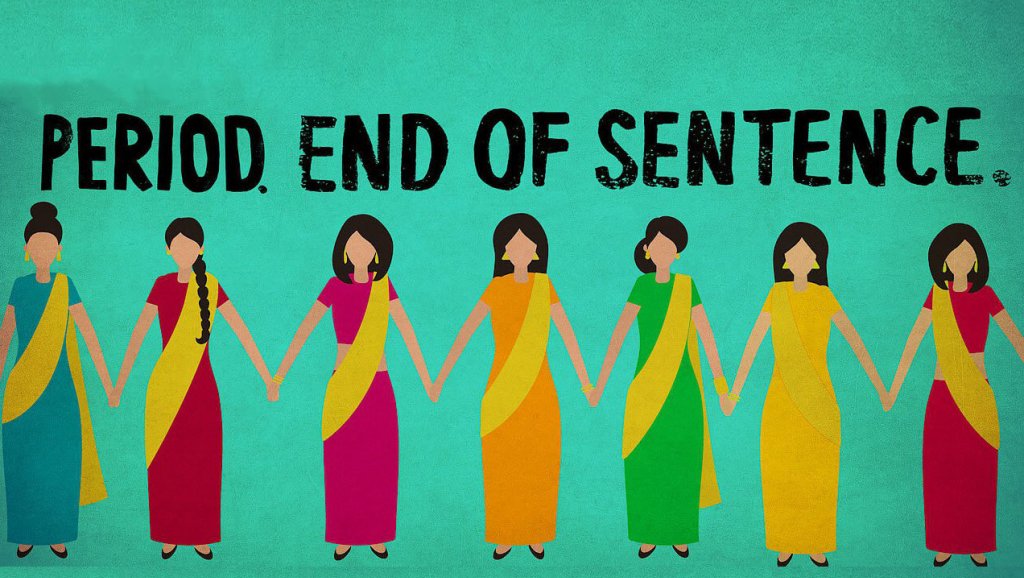 Between calling it “time of the month,” “Aunt Flo,” or even “Shark Week,” we’ve come up with endless euphemisms to avoid that dreaded word: period. That’s partly why, when director Rayka Zehtabchi accepted the Oscar for Best Documentary Short at the 91st Academy Awards, she was in shock at Period. End of Sentence.’s victory. “I can’t believe a film about menstruation just won an Oscar,” Zehtabchi exclaimed in her acceptance speech. Neither could many of us—particularly after an anonymous Oscar voter had dismissed the film for being “icky.”

Talking about periods is still difficult for women—and transgender and nonbinary people—who menstruate. While menstrual taboo looks different around the world, it is especially pervasive in rural areas of India, where Period. End of Sentence. takes place. The documentary follows young women in the Hapur District of Uttar Pradesh, calling attention to the stigma they face and the changes that occur when a sanitary pad machine was installed in their village. Before having access to pads, school-aged girls would often miss classes or even drop out entirely. Period. End of Sentence. displays the reality that menstrual taboo and period poverty continue to act not only as barriers to education but to overall well-being.

Period poverty is the inability to afford products that manage menstrual bleeding or alleviate period symptoms. It also refers to poor menstrual knowledge and the lack of proper sanitation facilities such as bathrooms. Apart from India, period poverty is a serious issue in places like Zimbabwe, where women sometimes tie up dirty rags to soak up their blood or sniff glue in place of painkillers to numb cramps. In Nepal, menstruating girls are made to sleep outside the home, a practice that has led to the deaths of some who were banished to menstruation huts. But period poverty also affects low-income women in developed countries such as the United States and the UK. In London, one in seven young women do not have the financial means to buy period products, and in Leeds, more than one in ten girls have had to improvise sanitary wear due to affordability problems. The ‘tampon tax,’ which allows sanitary products to be taxed as ‘luxury’ and ‘non-essential’ items, makes these essentials even harder to afford in many American states.

The truth is, period poverty can arise anywhere. On top of financial constraints, misinformation and shame surrounding periods are giving rise to human rights concerns around the globe. People who menstruate are suffering simply because we don’t talk enough about the p-word. But the success of Period. End of Sentence. signals a shift in our openness to the subject, and period poverty awareness is spreading. After Sunday’s Oscars, the hashtag #MenstrualEquality became a trending topic on Twitter, with many users tweeting about the importance of publicly discussing menstrual equity issues to improve quality of care. Popular on Twitter last year was also Meghan Markle’s request for wedding guests to donate sanitary products to Myna Mahila Foundation, a charity whose aim is to break taboos around menstrual hygiene in India.

Policy-makers are adding to the menstrual health momentum with reforms, as several states fight to eradicate the tampon tax. Illinois and California have already passed laws requiring schools to provide free sanitary products. In England, teaching periods at schools will be compulsory by 2020. Meanwhile, the South Korean metropolitan government launched a program to distribute free menstruation management products in the Seoul Museum of Art, Seoul Metropolitan Library, and several other public locations.

There’s even a period emoji in the works, to be added to smartphone keyboards next month. The girls-focused charity Plan International pitched a handful of designs to represent menstruation, including a sanitary pad, a diagram of a uterus, and a pair of pants with a red stain. After campaigning for two years, the Unicode Consortium approved an icon resembling a drop of blood. Soon, millions of people can use the emoji to symbolize their periods, a small but significant step towards normalizing conversations about menstrual cycles.

Beyond simply discussing our periods, we need also address the power structures that allow period shame to exist. Because menstruation is frequently regarded as a girl’s entry into ‘womanhood,’ periods have come to signify notions of femininity, and dialogue concerning this ‘feminine’ issue is discouraged by patriarchal forces from being laid out in male-dominated spaces. A study of discourses around menarche found that when menstruation is introduced to boys, many respond with humor or mockery, limiting conversations about periods or silencing them entirely. Girls internalize this shame and are set on a problematic trajectory of aversion and confusion regarding their own bodies. The embarrassment is used to control women, deployed to keep them on the sidelines and block their claims to spaces that men want to retain for themselves.

Menstruation activism and period empowerment are about reclaiming these spaces that have been denied to us. It’s about acknowledging that the ability to manage menses lies in the intersection of economics, health, and social justice. It’s about making our experiences visible in the public sphere and recognizing that, while periods can be uncomfortable, talking about them doesn’t have to be.

You can view the trailer for Period. End of Sentence. here. The full film is available on Netflix.