My lovely and uneventful week in Jerusalem 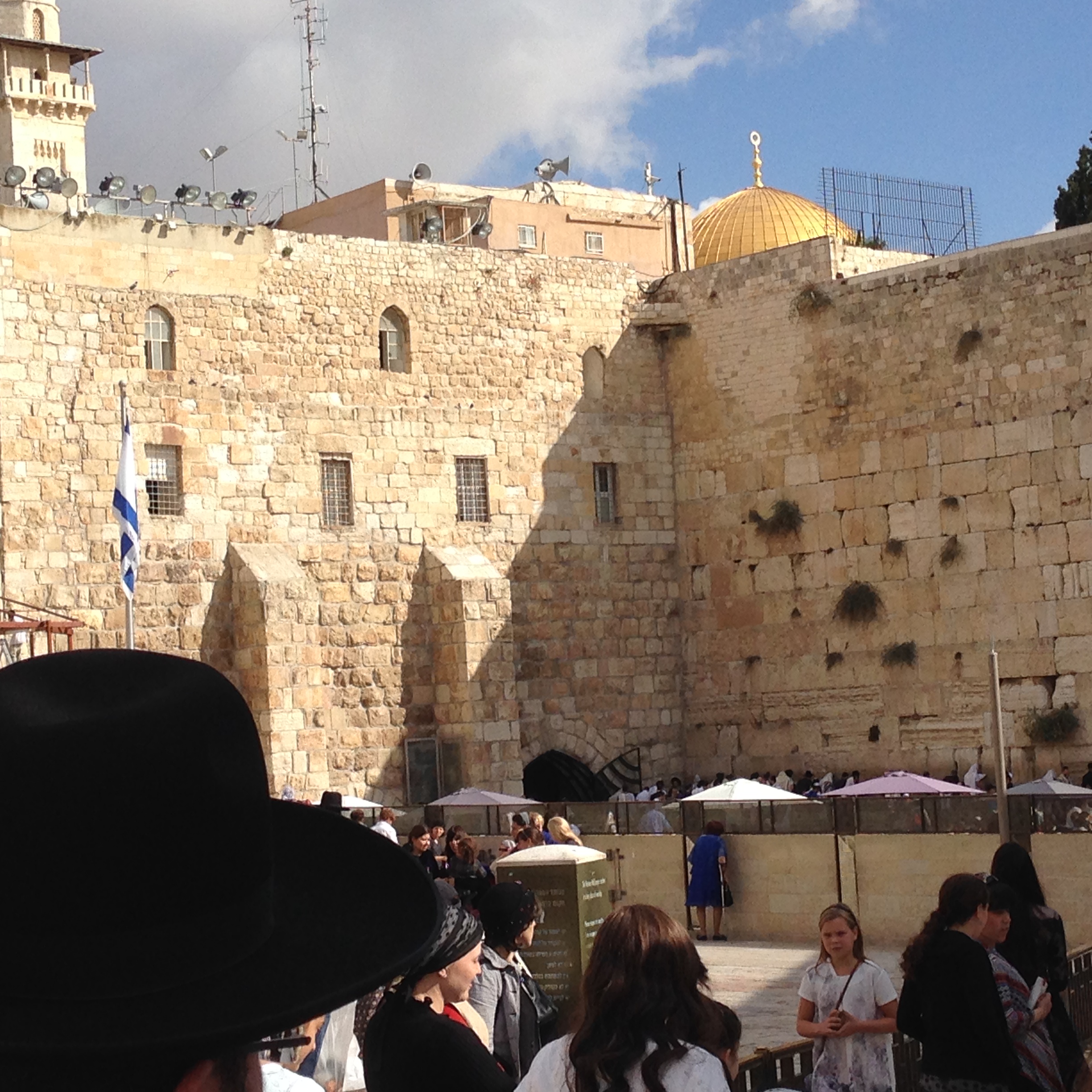 On a tour through the West Bank (typical tourist sites Bethlehem, Jericho, as well as Ramallah), we saw the Separation Wall covered in Banksy-esque art, quiet refugee camps that look like residential neighborhoods and the garish, guarded tomb of Yassir Arafat. Though our tour guide described the “shit-gun” that used sewage to disperse Palestinian demonstrators from one of the sentry towers on the Wall, and other distressing aspects of the Israeli government’s security apparatus, we didn’t smell the shit-gun in action, nor did we hear any demonstrations. While there was certainly unrest in areas of East Jerusalem and the West Bank, what we were not hearing on our tour actually has a name, the “Silent Intifada.”

My wife and I had just shown our passports seven times in a half hour getting through the Allenby/King George Crossing between Jordan and Israel. We waited at the border outpost; our tour bus delayed. When he finally arrived, the driver had a good excuse: “Traffic was bad. There was a terrorist attack.” A young man plowed his car into a crowd of people waiting at a light-rail train stop. Hamas had taken credit, our bus driver said. My wife and I checked our iPhones: she Haaretz, me the Jerusalem Post. The baby had not yet died. The suspect, who had been shot after climbing out of his car window, had not yet died. Hamas had not, according to what we read, taken credit.

The ride into Jerusalem was about 20 minutes from the border and, somewhat surreally, our driver took us right through the site of the attack just a couple hours earlier. Our driver slowed so we could see the smashed up car and some police and assorted bystanders by an idle light-rail train. I recognized the street, which our relatives had driven us along many times by then: Called the Seam, it roughly divides East and West Jerusalem.

A potentially loaded term, the “silent intifada” has been defined by one Israeli commentator in particular as the period before the unrest in East Jerusalem became especially loud and clear to all with the death of 3-month-old Haya Zissel-Brown (also reported as Chaya Zissel-Braun). Here’s a story of the next day, when “riots” broke out.

Having followed the reporting in Israel, this “terror” attack seemed a manifestation of “silent” Palestinian anger that we had so far eluded as tourists. But as every conversation with our relatives about Israeli-Palestinian relations ended during our trip, “It’s complicated.”

For the previous week, my wife and I stayed with her cousins, Roy, director of a clinic that serves both Israelis and Palestinians (or Arabs, as they were often called), and Michal, an exhibition designer at the Israeli Museum; and their two sons, Gil, 22, and just out of the IDF and Etai, 18, serving in January (both of whom we shared a very clean bathroom with). Their 24-year-old daughter, an art student, lives in the City Centre (the downtown area) with a roommate. The boys, both aspiring artists, like their mother and sister, went to work or hung out with their friends almost every night.

This American-ish, quasi-suburban scene set in an apartment complex between the mall and the zoo gave no indication of the growing tension only a 10-minute drive away in any number of Jerusalem neighborhoods. At dinner, my ignorance would play itself out with impolite questions, about The Nakba and the undemocraticness of Israel’s rightwingers, and my new family very politely schooled me all week. Gil, our most gracious and handsome 22 year old host, had just come home from a three-month backpacking trip through South and Central America during which the war in Gaza, or Operation as they call it officially (to avoid paying Israelis compensation, as Gil pointed out), was being conducted and during which he found himself often aggressively questioned by people who thought he and his homeland were the bad guys. He knew how to handle people like me with patience and knowledge. In short, the family made me want to move to Jerusalem and be their neighbor. The worst thing to happen during the week was a traffic jam resulting from the professional basketball game at the stadium near their home.

As far I could tell from the nightly TV news and foreign policy email newsletters, the big stories before Oct 22 were an avalanche in Nepal that killed at least 3 Israeli climbers and European states voting on potential Palestinian statehood.

Walking around the Jerusalem City Centre on the sunny 65-degree day after the rail-stop attack, not far from the “riots,” there was no tension in the air among the locals. As we walked up Ben Yehuda Street, Gil told me he heard that a Jewish Ultra-Orthodox man had run over two young girls in an East Jerusalem neighborhood Sunday, killing one. The driver fled the scene because he feared a lynching but later turned himself in. Gil implied the “accident” was being spun by both sides. There seemed to be a clear distinction from the rail-stop attack, which has become a familiar vehicular terror tactic, used several times in the past and at least twice with bulldozers or “diggers.”

Updates about the rail attack, summarized with relative objectivity here, came throughout Thursday Oct 23: the suspect, reportedly affiliated with Hamas and an ex-prisoner, had died of his gunshot wounds. The suspect’s brother was arrested. The suspect was from Silwan, a neighborhood in East Jerusalem where residents had become angry since Jewish nationals started moving in. One report made a vague reference to rioting in East Jerusalem. More news coverage came when the baby was found to be a U.S. citizen. I read nothing about the Palestinian five-year-old killed in a hit-and-run.

Days before, Uncle Rafi, a former IDF press liaison and Spanish interpreter for Golda Meir, chauffeured us all around the city, from the Damascus Gate to Yad V’Shem, explaining how leadership on both sides bickered like petty children to the detriment of all. The day after the attack, Palestinian Authority president Abbas (Abu Mazen in Israel) and Israeli prime minister Netanyahu blamed one another for the baby’s death, called for antagonistic measures and tossed out accusations of incitement without irony. I could feel multiple narratives bubbling up and complications compounding, but we had a plane to catch back to the States.

In Jerusalem during the week of Oct 15 to Oct 22, while cruising around West Jerusalem and a couple parts of East Jerusalem, scanning Ha’aretz, the Jerusalem Post and my “Palestinian” Google Alerts daily, and visiting the Muslim, Jewish and Christian quarters of the Old City on two separate days, I heard just as much about what was going on in predominantly Palestinian/Muslim/Arab neighborhoods and at the al-Aqsa mosque compound as folks back in the U.S.

A little bit of what I missed:

Through October, at the Noble Sanctuary compound in the Old City that includes the holy sites of the Temple Mount, Dome of the Rock and the al-Aqsa mosque, Israeli defense forces limited access to Muslims worshippers at the mosque, particularly during the Sukkot Jewish holiday, to allow more Jews to visit. There were several days of clashes among of Jewish Settler activists, the Israeli police protecting them and both Muslim worshippers and Palestinian protesters including on Wednesday Oct 15, the day we arrived.

An Israeli MP criticizes Israel’s banning of women from worshipping at al-Aqsa.

A 13-year-old demonstrator is killed by Israeli security forces near Ramallah.

Men under 50 are barred from al Aqsa mosque compound (it had been under 60 the day before).

Abbas, the Palestinian president, speaks out about preventing Jewish settlers from “desecrating” al-Aqsa mosque, which is officially under the care of the Jordanian government, and says international legal action should be taken against Israel.

One of two Palestinian girls, run over reportedly by an Israeli settler while walking home from kindergarten in East Jerusalem, dies.

UPDATE Oct 30-31: After Yehuda Glick, a leader of the Jewish religious activists who want to open the Temple Mount, was seriously wounded in an assassination attempt and an Israeli counterterrorism team then killed the suspect, “Israel barred all access to a contested sacred site in the Old City for the first time in many years on Thursday, a step that a Palestinian spokesman denounced as a ‘declaration of war’…” according to the Friday New York Times.

Here are some iPhone photos from my trip