When Cat Callers Can’t Clam Up 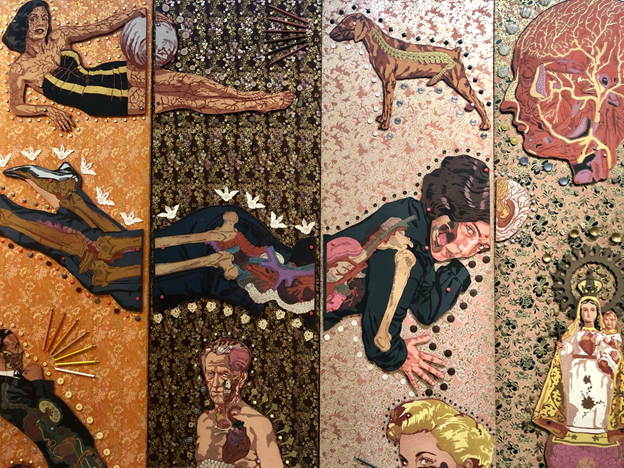 (The photos that appear in this piece were taken by the author during a trip to Havana’s Museo Nacional de Bellas Artes. The artworks were made by Cuban painters in the last century.)

When University of Havana sociologist Magela Romero Almodóvar finished her lecture on gender gaps and development challenges in Cuba, she opened the floor to questions on the topic of inequality. We had just learned that Cuban women lacked daycare centers for their children, were more likely to emigrate for better job prospects, and provided, on average, 15 hours more per week of nonremunerated labor. While the discussion was focused mainly on economic aspects of gender studies, one student brought up a non-economic question that had been plaguing all of us for weeks: How do women in Cuba deal with catcalling?

Since arriving in Havana in late May, our group of twelve–11 women and one man–have had many candid conversations about the ups and downs of the IFP experience. An issue that periodically arose was the frequency or intensity of cat-calling, experienced not just by us foreigners but also the local women we’ve spoken to or even the ones we witness strolling the streets. It seemed that every day, on the way to class at Casa de las Americas just two blocks up and one avenue over from our apartment, someone would inevitably be the victim of unwanted male attention. Sometimes this came in the form of literal ‘cat calls,’ i.e. the sound one makes when pursing their lips and making a kissing noise or tsk-ing to get a feline’s attention. Other times, my yellow-ish skin and almond eyes would prompt men to yell “ni hao” at me (as in “hello” in Mandarin, a language I do not know, spoken in a country I am very much not from–though admittedly I tend to get this greeting almost everywhere I go). There might also be the occasional whistle or the over-eager “I love you!”, but no matter the delivery, the catcalls were present and persistent.

Many travel blogs caution female travelers on the occurrence of catcalling in pretty much any country, so perhaps it’s safe to say that the issue is a systemic problem rather than specifically Cuban or part of the harmful stereotype of sexually aggressive Latinx men. At the same time, Habaneras I’ve talked to agree that street harassment here is rampant, and that at best, it’s annoying; at worst, it’s demeaning and invasive. Claudia, a young journalist who I made friends with, thinks it’s time for a campaign to address the subject or perhaps for a #MeToo movement of their own. Latin America’s equivalent hashtag, #NiUnaMenos, has already made headlines following protests in Argentina, Brazil, Peru, and Chile: Where were the marches in Cuba?

Dr. Romero Almodóvar told our class that, in theory, Cuban women have no reason to march though the current reality may prove otherwise. Ever since the ousting of the Batista regime 1959, the revolutionary government has taken steps to ensure equality of rights and opportunities for all, including measures like free childcare, extended paternity and maternity leave, and guaranteed employment for women who enter the workforce. The state also offers many birth control options as well as free and legal abortion services. This freedom of choice stands in stark contrast to other Latin American countries like Argentina and Chile, whose populations are still struggling to decriminalize abortion.

Although the state succeeded in raising female standard of living, the word “feminism,” according to GPIA professor Gabriel Vignoli, wasn’t uttered in Cuba until the mid 1990s. What took place after the 1959 revolution was an overwhelming ascent of women’s lives without the creation of a feminist consciousness. Women suddenly had free and massive access to education, and consequently filled roles that were unimaginable in a patriarchal society–all without having to “fight” for it. However, Cuba’s Special Period (an economic crisis following the collapse of the Soviet Union) left the government unable to fulfill its promises to provide social assistance and benefits. Daycare centers became overpopulated. Employment was no longer ensured. And women were forced back into the household as they once again became responsible for making ends meet during a time of severe food shortages. Whereas discussing gender (and racial) discrepancies was seen as counterrevolutionary before the Special Period, the economic crisis of the 1990s saw women and black Cubans create organizations to tackle inequality and speak openly about sexism, racism, and the intersection of both.

The Revolution thus was not fully successful in “erasing” race or doing away with gender roles, says Dr. Romero Almodóvar. This is partially why, to return to the topic of street harassment, women here have to contend with constant catcalling. She argues that Cuban men are socialized from a young age to yell out piropos, as they’re seen as harmless or even sought after by women. The word piropos itself is euphemistic, conveying something like “compliment” or “flattering comment” or “pick-up line.” While pioneering a Cuban #MeToo equivalent might at the moment be a hard task, Dr. Romero Almodóvar at least gave us some insights into how she’s learned to deal with unwanted male attention. She instructed us to either ignore the men and walk away, make direct eye contact and say ¿Y quién te preguntó? (And who asked you?), and my personal favorite: answering come pinga to any unwelcome advances.

She advised the one male member of our group too, recommending a course of action that could benefit any man who chooses to listen: